Why Ontario's pot plan will keep the black market alive

The province could have made grey-market dispensaries into allies, experts say; instead they’ve turned them into competitors 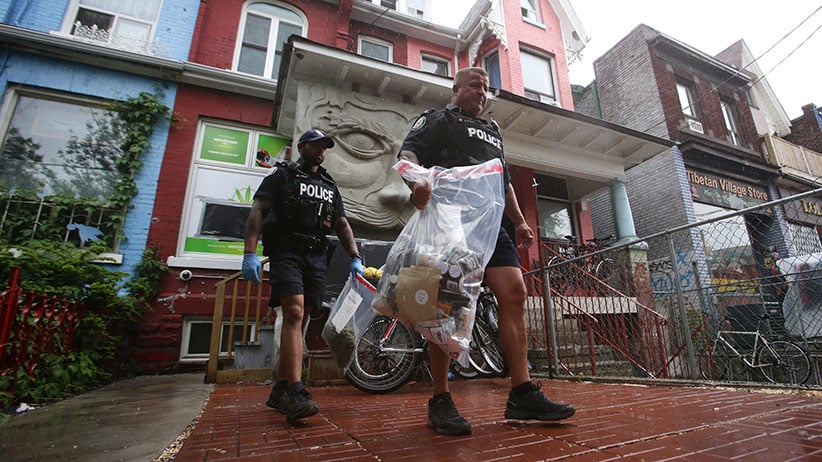 When the Ontario government announced its plan for the retail sale of marijuana starting next year, the province’s attorney general wanted to make one thing clear: the government is serious about eliminating the illicit cannabis market. Yasir Naqvi issued a stern warning for the dozens upon dozens of marijuana dispensaries in the province. “If you operate one of these facilities,” he said, “consider yourself on notice.”

But some industry experts doubt the government’s retail and distribution model will be effective at driving illicit marijuana dealers out of business. Moreover, the government opted for an expensive model that will likely entail higher law enforcement costs. “The province seriously missed an opportunity with regard to existing businesses,” says Rosalie Wyonch, a policy analyst at the C.D. Howe Institute. “They could have turned them into allies in the regulated market, and instead they’ve turned them into competitors in the black market.”

On Friday, the province said the sale of marijuana in the province will be strictly limited to government-owned retail outlets, along with online sales. A subsidiary of the Liquor Control Board of Ontario (LCBO), the provincially owned retailer and distributor of alcohol, has the exclusive right to sell cannabis. None of the existing 650 LCBO stores or 210 agency outlets will carry marijuana. Instead, sales are restricted to dedicated retail locations that will only sell cannabis.

The decision is a blow to marijuana dispensaries that have been operating illegally, some in hopes the government would find a way to regulate the private sale of cannabis when recreational use is permitted (the federal government is targeting July 1, 2018 for legalization, and left it up to each province and territory to determine how marijuana will be sold). “We’re making it very clear that it’s been illegal, it will continue to be illegal and consumers will have an alternate source of supply,” Ontario finance minister Charles Sousa said of dispensaries at a press conference. He added that some of the government-owned cannabis stores will be located “strategically” near pot shops to drive them out of business.

As of next July, the government is planning to have open at least 40 stores and grow to 150 by 2020. Wyonch at C.D. Howe contends that’s not enough to meet demand. There are at least 70 storefronts and 30 delivery services in Toronto alone, she points out. “They’re not sufficiently covering the market, and they’re leaving tonnes of room for the black market to operate,” she says, adding it’s unlikely that every dispensary will voluntarily shut down after the government’s warning. The business was illegal before last week as well, and yet operators still found the profits attractive enough to risk a police raid.

“The cannabis community is no stranger to enforcement and prohibition, and they’ve stuck with it,” says Paul Lewin, a Toronto lawyer who has represented cannabis dispensaries and clinics. “They might be driven underground, but they’re not going away.”

Even if the number of retail locations proves to be inadequate at first, online sales can help address some demand, says Daniel Bear, a professor in the criminal justice program at Humber College. The government’s intent to start small, gauge performance and ramp up accordingly is also good business sense. “It would be difficult to imagine opening any business with 200 retail locations in the first year of operations,” Bear says.

The price and taxation of legal marijuana is another important component of stamping out illicit sales, and that still has to be determined. Finding a balance will be challenging. If the price is too low, governments will be seen as encouraging people to take up pot. Too high, and users will stick to illicit sources. The regulatory and operating costs of the country’s existing licensed producers add to the price of marijuana compared to illicit growers, and the Ontario government’s proposed retail model comes with its own set of costs. Private operators, in contrast, compete with one another and have a built-in incentive to keep prices and costs low.

If governments compete on price, illegal growers and retailers could respond by dropping their own prices. “The illicit market will protect its share,” says Chris Damas, editor of an investment newsletter called the BCMI Report, which analyzes marijuana stocks. The quality of cannabis from illicit producers is just as good—if not better—than what licensed producers are offering, he says, presenting another challenge. Damas estimates about half of illicit sales at most will move to legal channels within the first year.

As for whether the legal market will bring in new, recurring users, that’s up for debate. A widely cited study from Deloitte contends “the total potential marketplace” for recreational marijuana in Canada is “close to 40 per cent of the adult population,” based on a survey it conducted. In arriving at that number, however, Deloitte included 17 per cent of respondents who said they “might” try marijuana if legalized.

By controlling the retail sale of marijuana and pledging to shut down dispensaries, the Ontario government will likely have to devote more police resources to the task. The judicial system could be taxed as well, and the courts in Ontario are already plagued by delays. Shortly after the Ontario government’s announcement last week, Public Safety Canada pledged up to $274 million to law enforcement for cannabis-related issues. More than half of that amount will combat drug-impaired driving, while $113.5 million will be spent on border security and ensuring “organized crime does not infiltrate the legalized system.” (Ironically, one of the justifications for legalization is to decrease the burden on police and the courts.)

Wyonch at C.D. Howe suggests a better model would be to regulate existing dispensaries, contending it would be less expensive, reduce competition with the illicit market, and tap into the cannabis knowledge and expertise of the people working in the sector today. “Private entrepreneurs would cover the market much more effectively than the province choosing individual locations,” she says, “and with competition, have an incentive to constrain operating costs and keep prices low.”

RELATED: The ‘godfather of Canadian cannabis’ on the pot industry’s future

Politically, that’s a tough sell. The government risks being seen as rewarding business owners who have been openly flouting the law. Though a majority of Canadians favour the legalization of cannabis, support is not exactly overwhelming. A survey from NRG Research Group earlier this year found 51 per cent of respondents are in favour of legalization, while 14 per cent neither support nor oppose it.

Still, other jurisdictions have taken steps to accommodate dispensaries. Vancouver created a set of bylaws to regulate marijuana retailers in the city, and issued the first business licence last year. As of May, 10 dispensaries had licences and another 37 were in the process. Denver, Co. also initiated a licensing program after the state voted to legalize in 2012. At the time, the city had around 200 unlicensed dispensaries. Even so, a thriving illicit marijuana market still exists. GreenWave Advisors, a marijuana consulting firm in New York, estimates that legal sales accounted for 16 per cent of the U.S. cannabis market last year, and won’t surpass the illicit market until 2020.

It’s likely the progress will be just as gradual in Ontario. “The LCBO has been very successful,” Damas says, “but we didn’t have a multi-billion dollar moonshine business to face when the LCBO was created.”