Why peace won't come quickly for Quebec and Newfoundland and Labrador

There have been hints of a thaw between Canada's uneasy neighbours, but any real rapprochement seems far off 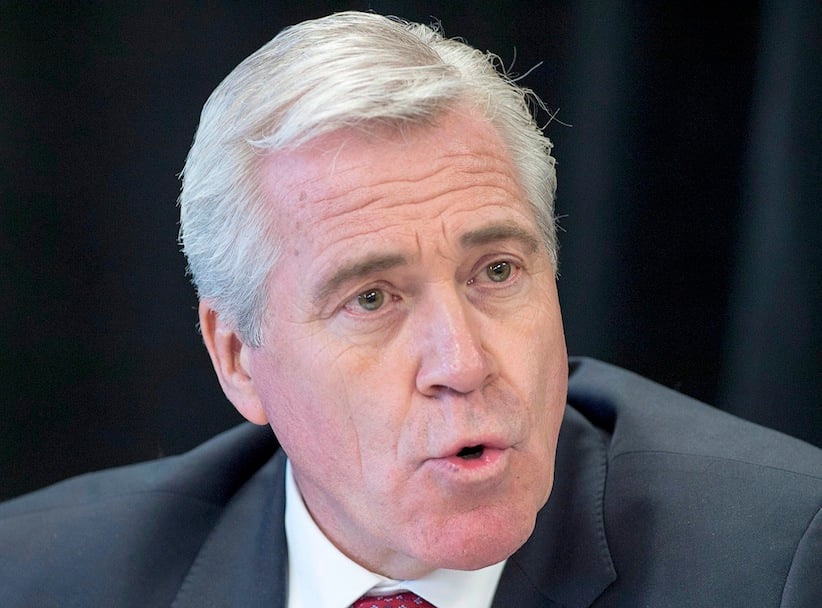 Newfoundland and Labrador Premier Dwight Ball fields a question at a meeting of the Council of Atlantic Premiers in Annapolis Royal, N.S. on Monday, May 16, 2016. (Andrew Vaughan/CP)

ST. JOHN’S, N.L. – They are arguably the least friendly neighbours in Confederation.

Newfoundland and Labrador has been feuding with Quebec since before the Atlantic province joined Canada, with a barely hidden animosity driven by border disputes and hydroelectric power feuds that have wound through courts for decades.

Which is why headlines were made last month when Quebec began talking about possibly “burying the hatchet” on an epic scrap over the lopsided Churchill Falls hydro deal. Premier Philippe Couillard told reporters that it’s not just energy issues — the two provinces can collaborate on other things and need to build more neighbourly ties.

But there is deep skepticism in Newfoundland and Labrador, which has a population smaller than metropolitan Quebec City and a collective wariness borne of distrust.

Premier Dwight Ball says he’s open to talks with Quebec, if they help his province. But any real rapprochement sounds far off.

“We haven’t had a discussion like this in a long time and it’s really too early to tell where this would go,” he said in an interview. “If it means nothing, or we can’t advance it to the point where there’s benefit for our province, well then we just won’t go there.

“Like you would with any good neighbour, we’ll explore options to work together in the future.”

Those talks may eventually include potential collaboration on hydro projects that could help meet federal targets for cleaner energy, Ball said.

But one thing is clear, he added. His province has no intention of abandoning ongoing legal action over what is bitterly perceived as the woefully unfair Churchill Falls deal.

The 1969 agreement has so far delivered more than $26.5 billion for Hydro-Quebec, which financially backed the hydro dam in Labrador, versus about $2 billion for Newfoundland and Labrador.

It doesn’t expire until 2041. And it’s the subject of Newfoundland and Labrador’s most recent application to the Supreme Court of Canada to overturn losses in Quebec courts that have nixed attempts to renegotiate terms.

Keith Hutchings, the Official Opposition natural resources critic for the Newfoundland and Labrador Progressive Conservatives, says resentment towards Quebec is real. Trust must be rebuilt.

Hutchings blames what he called transmission roadblocks through Quebec for thwarting his province’s hydro ambitions over much of the last century.

Those obstacles drove then-Tory premier Danny Williams to strike a deal with Emera, a Nova Scotia utility company, to build the Muskrat Falls hydro project now under construction in Labrador, Hutchings said in an interview. The $11-billion project will bypass Quebec, moving power to Newfoundland through subsea cables and then on to Nova Scotia and mainland markets.

“Newfoundland finally has some level of independence on energy development,” Hutchings said.

“We should be in no hurry to run to Quebec now and say ‘Let’s have a discussion on development’ unless they’re at some point willing to give significantly on the issues that are important to us … transmission and the grid, giving us access — that opens up the whole eastern seaboard.”

Valerie Vezina, a political scientist at Memorial University of Newfoundland, is a Quebecer who fell in love with St. John’s during a visit as an undergraduate student.

She says the Labrador boundary dispute of the 1920s also has much to do with simmering animosity.

Quebec has never accepted a 1927 British Privy Council ruling that the southern border of Labrador lies at the 52nd parallel north of the equator. That boundary was reaffirmed by terms of Confederation for Newfoundland in 1949.

The issue flared again during the Quebec provincial election of 2014, when televised maps provided by its elections agency depicted part of the province extending into southern Labrador.

At the time, Williams described how during meetings of eastern Canada leaders and New England governors, Quebec officials would put up a map showing Labrador territory as part of Quebec.

The boundary ruling is a still-sensitive issue that fuelled the energy fights which would erupt years later, Vezina said in an interview.

“On Quebec’s side, they felt like they lost part of the territory they thought belonged to them. Then Churchill Falls, on Newfoundland’s side, that just led to this big tension between those two provinces.”

Still, there are long-term incentives on both sides to make nice, said Allan Fogwill, a Newfoundlander who’s also president and CEO of the Canadian Energy Research Institute.

The expiry of the Churchill Falls deal in 2041 will revert much of that power back to Newfoundland and Labrador, he said from Calgary. Quebec would lose much of its lucrative export revenue, while its neighbour would need a transmission route to make use of it, he added.

“They’re either going to have to make a deal or have to build a very expensive system that’s redundant.”

“Talking is always better than litigation.”