Why rats are overdosing in Vancouver's Downtown Eastside

Rodents and other pets have been getting into their owners' drugs, forcing community volunteers to play emergency vet 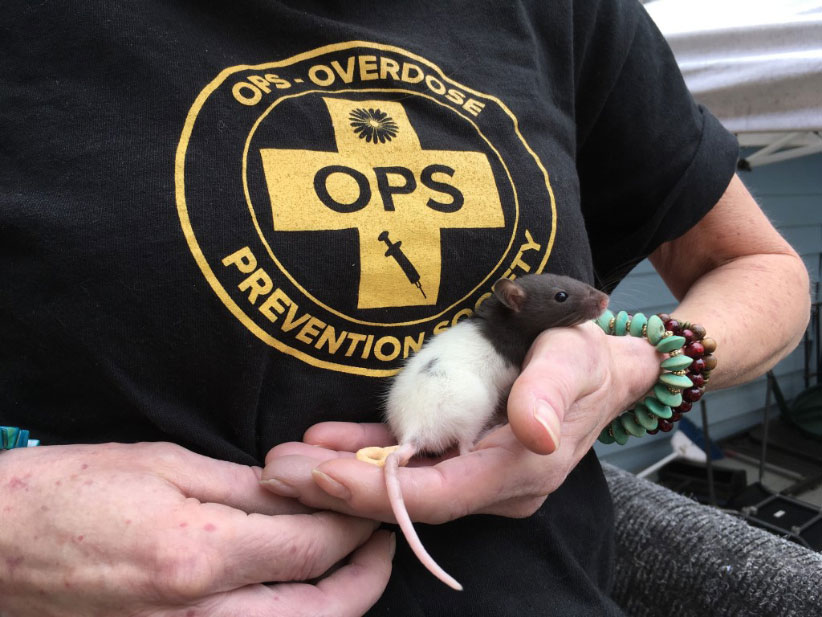 Snuggles, the rat that recovered from a heroin overdose, with a member of Vancouver’s Overdose Prevention Society (Brian Hutchinson)

Long before Snuggles took the crown this week as Vancouver’s most famously spared-from-death rat, there was Sniffy, onto whose tiny head performance artist Rick Gibson once planned to drop a heavy concrete block. This to make a point about the frailty of life or something. We’re still not quite sure.

Public outrage spared Sniffy from that messy ending; Gibson was chased from the intended execution site by an angry mob. Urban legend? It is not. This city loves a good rat rescue.

So to Snuggles, the small hooded rat that scarfed down some heroin Sunday night in Vancouver’s drug-infested Downtown Eastside (DTES). Someone–no one is certain who–delivered the droopy rodent to the neighbourhood’s Maple Overdose Prevention Site, where volunteer worker Melissa Patton took charge. She recognized the signs of an OD—laboured breathing, lethargy—and administered a rat-sized dose of naloxone, the anti-opiate drug that is credited with saving hundreds of human lives in the DTES.

“There was no way to inject the naloxone into her little body,” Patton recalls, “so I put a drop or two on her nose.” Then came the requisite oxygen, delivered via cannula, a thin tube. Snuggles revived.

Word spread quickly. Soon, Patton was answering questions from local reporters, then reading and listening to accounts of her rapid overdose response from media outlets around the world.

What does she make of it? “I’m amazed,” says Patton. “If it draws more attention to the epidemic we’re experiencing, then good.”

The epidemic is drug-overdose, which has claimed more than 150 lives in Vancouver this year alone, and 215 in 2016.

The spike in overdose deaths is attributed to the introduction of fentanyl, a powerful synthetic opioid, into the illicit drug supply. “It’s just ridiculous, how many people are dying,” says Overdose Prevention Society founder Sarah Blyth. “It’s like a genocide.”

Were it not for the free distribution of naloxone—also known by its brand name, Narcan—to local responders, volunteers and drug users, the human death toll would be much higher.

RELATED: Fentanyl, the king of all opiates

With fentanyl, heroin and other drugs scattered about the DTES, it’s inevitable that animals will be affected, too. Kim Monteith, manager of animal behaviour and welfare for the B.C. SPCA, runs a number of programs in the neighbourhood. She recalls a few incidents: a woman called for help when her dog ate some crack. A cat ate some marijuana, and got very stoned.

Rodent ODs should come as no surprise. Rats have for decades run riot in this port city, particularly in the DTES. More recently, says Monteith, they have become “the popular pets down here. They’re super social and easy to care for. The problem is they reproduce like crazy. Someone might have one or two pet rats, and suddenly their room is filled with 200 of them.”

Another problem: They will sniff at, try to eat, almost anything. A quick lick at some discarded heroin or fentanyl, at a discarded needle, sends a rat into free-fall.

DTES overdose prevention worker Dakota Cootes thought cases involving local pets were fairly rare, “until about two months ago, when a puppy had to get help at Insite,” the city’s first supervised injection clinic.

Now comes an apparent uptick in rat ODs. Cootes performed a rat rescue just the day after Snuggles was famously revived. “A [drug user] bought a baby rat from some street kids and noticed it wasn’t doing so well,” Cootes says. “He brought it to us. We held its mouth open and squirted some Narcan in there, and a few minutes later it was fine.”

“We’ve never seen anyone intentionally give drugs to an animal,” Cootes adds. That would be exceptionally bad. Cause for Sniffy-level concern. Vancouver is not that cruel; it only puts up with the loss of two-legged lives.