Why some people feel COVID vaccine side effects and others don't

Vaxx Populi: Some research has found more side effects after one dose of AstraZeneca than of Pfizer. But there’s no evidence that a stronger reaction means stronger immunity. 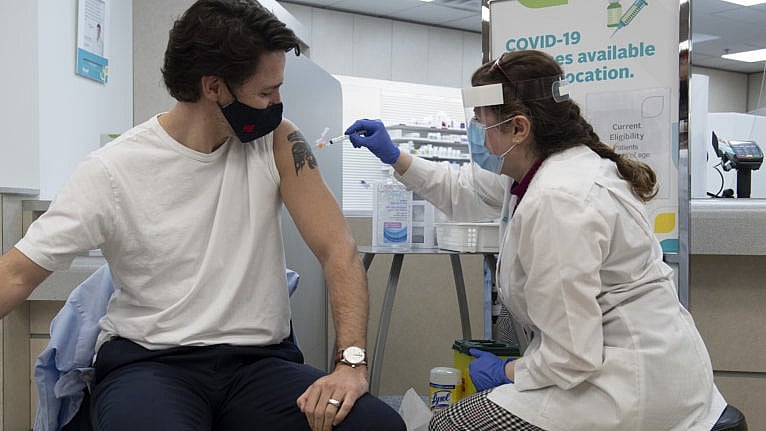 On April 23, Prime Minister Justin Trudeau and his wife, Sophie, got their AstraZeneca COVID-19 vaccine shots at a pharmacy in Ottawa. Four days later, the PM reported, “We’re feeling great.”

But some people are feeling downright rotten after getting a shot. My colleague Shannon Proudfoot spoke for many when she noted, “Just to offer encouragement to anyone else experiencing the AstraZeneca hangover, I felt like absolute garbage—fever, chills, headache, muscle aches—until about 27 hours after my shot, then things improved rapidly. So it’s brutal but brief, courage!”

According to Health Canada, common vaccine reactions fall into two main categories: local side effects, such as redness, pain and swelling at the injection site; and systemic side effects, such as headache, chills, fatigue, nausea, fever and muscle aches. They usually last anywhere from a few hours to a few days after getting vaccinated.

RELATED: What new COVID vaccine modelling says about when Canada might lift restrictions

“I try to reassure people that these are expected reactions,” Dr. Karina Top, an infectious diseases physician and vaccine expert at the Canadian Centre for Vaccinology in Halifax says. “It’s a sign that the immune system is getting revved up, responding to the vaccine and triggering a response so that they will be immune to the virus that causes COVID when and if they are exposed in the future.”

“This is the largest vaccination program we’ve ever run in Canada, and by far the largest adult vaccination program,” Top says. “Many, many people are probably getting vaccinated who haven’t had a vaccine at all in a long time…and people are probably monitoring their own symptoms a lot more closely than they would be, say, if they were getting their annual flu vaccine.” She also thinks that people who are having more severe reactions may be “more likely to talk about it than people who didn’t have any reaction.”

At the same time, she points out that temporary side effects from the COVID vaccines are more common than what experts see with the flu vaccine every year. “It’s important for people to be prepared,” Top says.

So many people were taking to social media in recent days to talk about their own side effects, that Dr. Darren Markland, an ICU physician in Edmonton, conducted Twitter surveys of the AstraZeneca and Pfizer vaccines. Those anecdotal results showed that while less than seven per cent of participants experienced “bad flu symptoms” after getting a Pfizer shot, up to 20 per cent of those who got the AstraZeneca vaccine experienced such symptoms.

Clinical trials for the vaccines, as well as surveys of current mass vaccination efforts, do show a difference between side effects after getting AstraZeneca, which is a viral vector vaccine, versus the Pfizer and Moderna mRNA vaccines, says Top. In particular, there tend to be more side effects after the first dose of AstraZeneca while, with the mRNA vaccines, reactions are a bit worse after the second dose.

The number of people reporting systemic side effects after a first dose of the AstraZeneca was 33.7 per cent, including 22.8 per cent reporting a headache, while 58.7 per cent had at least one local side effect (led by 49.3 per cent having tenderness at the injection site). There is no data in the Lancet study about second doses of the AstraZeneca vaccine because Britain has adopted a “first dose first” strategy, like Canada’s, and is currently in the midst of giving out second doses, as well as continuing with first shots to those still unvaccinated.

Still, there is no way to be sure who will experience side effects and who won’t. “We don’t fully know why some people have more of a reaction than other people,” Top acknowledges. “We do see that, in general with vaccines, women tend to be more likely to have a reaction.  And with the clinical trial for the COVID vaccines, people who were younger—under 55 or 60—had slightly higher rates of those types of reactions at the injection site and what we call systemic reactions, than people who were older.” Top has had two doses of the Pfizer vaccine and, aside from a mildly sore arm, didn’t have any reaction to either shot. “I was lucky,” she says.

For those who worry about what a lack of reaction after getting a shot may mean, Top has good news: There’s no scientific evidence that a stronger reaction means a stronger immune response to the virus. “The clinical trials showed nearly everybody after two doses had virtually 100 per cent protection against severe COVID, hospitalization and death from COVID, regardless of what vaccine you got and the side effects you had,” she says. “I wouldn’t worry if you didn’t have any of those symptoms; I wouldn’t be worried if you did.”