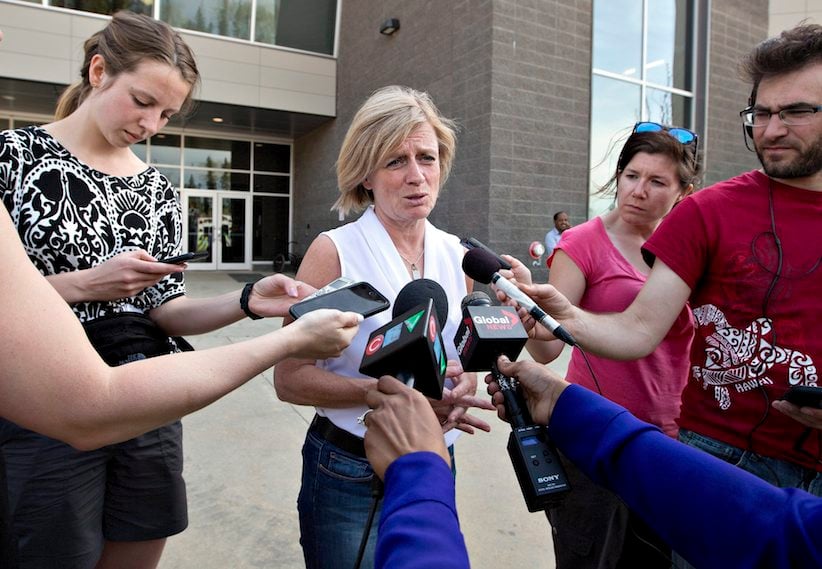 Alberta Premier Rachel Notley speaks with media about the wildfires in Fort McMurray, Alta., on Wednesday May 4, 2016. The wildfire has already torched 1,600 structures in the evacuated oil hub of Fort McMurray and is poised to renew its attack in another day of scorching heat and strong winds.THE CANADIAN PRESS/Jason Franson

CALGARY — The Opposition Wildrose Party is pushing the NDP to clarify how much it would cost to provide taxpayer-funded rebates to political candidates and parties.

The Wildrose estimates there would have been a more than $7 million tab had the plan been in place during the last election.

The NDP’s proposal would rebate political candidates and parties half of their expenses if they win at least 10 per cent of the vote.

Jessica Littlewood, who chairs the legislature’s ethics and accountability committee, says running a campaign is costly and elections should be about ideas and not the size of a candidate’s wallet.

She says the idea, which passed in Wednesday’s committee meeting, is not set in stone and there will be plenty of discussion before the fall’s legislature sitting.

Opposition parties says the government should not be increasing costs for taxpayers while Alberta’s economy is suffering.

“I don’t know of any Albertans who think the NDP government should be dreaming up schemes to funnel millions of dollars away from citizens and into the coffers of political parties, especially during these tough economic times,” Wildrose house leader Nathan Cooper said in a release Thursday.

“Just by proposing a risky idea like this, the NDP has shown that they’ve completely fallen out of touch with the struggles of everyday working families.”

Progressive Conservative MLA Sandra Jansen, who sits on the committee, said in a statement Wednesday she was “surprised and disappointed” by the proposal.

“This government surely has more pressing matters to focus on, given the current state of Alberta’s economy. The tone deafness of this proposal is staggering.”

Littlewood said it shouldn’t be a partisan issue and the plan is about making sure there’s a “good, strong, healthy democracy in Alberta.”

“Elections should not belong to only those that can afford it.”

Littlewood said the NDP plan isn’t much different to what exists at the federal level and in other provinces, including in Saskatchewan, which has a conservative government.

Manitoba’s governing Tories, which swept the NDP out of power in April’s election, have introduced a bill to eliminate an annual subsidy for every party based on how many votes they received. But the Tories are not getting rid of rebates for election expenses.