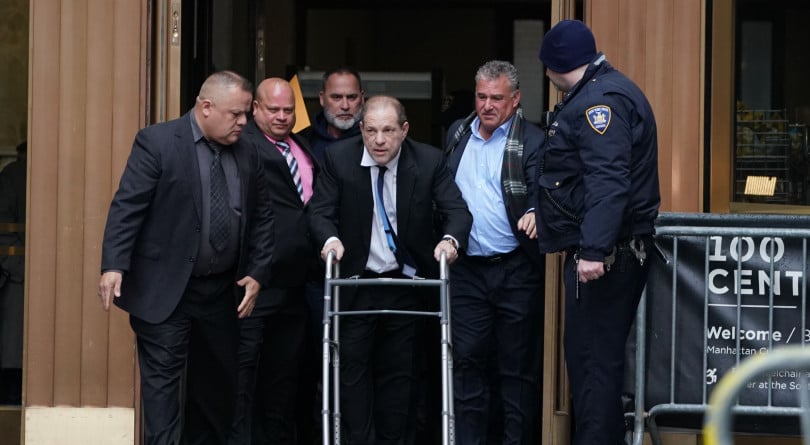 When I was reporting on the first Bill Cosby criminal trial in early 2017, the half-joke among media covering it was that the fallen comedian’s cane “never touched the floor,” a reference to Cosby’s theatrical bid to evoke sympathy. Even at age 79, Cosby, charged with three counts of aggravated indecent assault against Andrea Constand dating to 2004, was a large, towering presence; reports circulated of him appearing vigorous in unguarded moments. In court, however, he presented as a feeble, blind man who couldn’t hurt a fly; he entered stooped, holding his white cane in one hand and hanging on to the arm of his PR flak, Andrew Wyatt, with the other. Enough doubt about the evidence—or sympathy for Cosby—was generated during the trail that it ended in hung jury and mistrial.

Cosby was retried and convicted on all counts in 2018, months after serial accusations of sexual assault and harassment against Harvey Weinstein triggered #MeToo. After the Cosby verdict was read, the state prosecutor called for Cosby’s bail to be revoked, arguing that the wealthy performer owned a private plane and posed a flight risk. A suddenly robust Cosby jumped up from his chair and yelled: “He doesn’t have a private plane, you asshole!” (The judge didn’t revoke bail but later sentenced Cosby to three to 10 years in prison.)

Now Weinstein and his legal team appear to be mounting a similar sympathy bid, indicated by photographs of the former Hollywood powerhouse entering a bail hearing last week. Weinstein, accused by more than 80 women of sexual assault or harassment, goes to trial on Jan. 6; he’s facing five counts of predatory sexual assault, including rape in the first and third degrees, involving two women (he has pleaded “not guilty” to all of the charges).

RELATED: Let’s finally call “violence against women” what it really is

In the photos, the 67-year-old appears feeble and emaciated, having shed what appears to be half of his body weight as he clings to a bulky metal walker. Public scrutiny “was hard on” her client, Weinstein’s lawyer, Donna Rotunno, said last week. The walker was needed because Weinstein was undergoing back surgery the following day: “We wanted him to use a walker last week and Mr. Weinstein didn’t want the press to think he was seeking sympathy. He is in pain…” It’s an account that doesn’t quite square with photos of Weinstein taken later in the day without the walker, striding through a Target store.

Weinstein and his legal team appear to be trying to summon “himpathy,” a term coined in 2018 by Cornell philosophy professor Kate Manne, who defines it as “the inappropriate and disproportionate sympathy powerful men often enjoy in cases of sexual assault, intimate partner violence, homicide and other misogynistic behaviour.” It’s an ingrained societal tilt to pay attention to powerful men. It’s also seen in undue focus on a perpetrator’s narrative—on the potential pain driving him or on the loss of his bright future. Meanwhile, the experiences and perspectives of female accusers are minimized, erased or dismissed.

Examples of “himpathy” abound. Cosby was buoyed by public support for decades, even as more than 60 women accused him of sexual assault. It was evident in the sympathetic media treatment of “Stanford swimmer” Brock Turner during the 2016 trial in which he was found guilty of rape. Even after #MeToo, male playwrights raced to depict the Weinstein case from the producer’s perspective—renowned playwright David Mamet was first out of the gate. Mamet’s effort was critically panned, but there’s still appetite to hear the “man’s side”: Sidelined for a few months after admitting he masturbated in front of female colleagues, Louis C.K. now jokes about his masturbation habits and rape whistles during his sold-out international “comeback tour.”

RELATED: Jian Ghomeshi’s #MeToo moment: It’s all about him

Even ordinary Joes summon himpathy, seen after a recent viral video of TV reporter Alex Bozarjian being groped by a marathon runner, later identified as 43-year-old Tommy Callaway. Bozarjian described feeling “violated” and “embarrassed.” Still, CBS’s This Morning gave Callaway the opportunity to tell “his side of the story,” as they put it on Twitter, even though there are no “two sides” to an assault caught on video. On camera, Callaway served up excuses (he “got caught up in the moment”; “I did not know where I touched her”; if he’d seen her shocked, angry reaction, he would have “gone back and apologized”) without expressing contrition. The Georgia police didn’t buy it: Callaway was subsequently charged with misdemeanour sexual battery.

If anyone is familiar with himpathy for perceived “great men,” fallen “great men” or even ordinary men, it’s Weinstein, whose movies “Rambo” and “Inglourious Basterds” helped shape that culture—and many norms we hold without thinking. His case offers a textbook lesson in systemic protections afforded powerful, privileged men. Even an audio recording of Weinstein admitting he assaulted model Ambra Battilana Gutierrez made during an NYPD sting had no consequences.

So it’s no surprise Weinstein is producing his own himpathy show. And there are signs it’s working. The bail hearing he hobbled into was called because Weinstein was found in an astonishing 57 violations of the use of his ankle monitor in under two months, which left him unmonitored for hours at a time. His lawyer pleaded “technical glitches” due to lack of reception in the affluent Westchester, New York, area where he lives, an improbable excuse. A poor man accused of the same thing would see his bail instantly revoked. In Weinstein’s case, the judge upped bail from $1 million to $5 million, secured with a $2 million bond, the equivalent of a light wrist slap.

The same day, Megan Twohey and Jodi Kantor, the New York Times reporters who broke the Weinstein story in 2017, revealed how the legal system protects the wealthy and powerful. They announced a tentative, secretive $25-million settlement had been reached in a civil lawsuit launched by more than 30 actresses and former employees against Weinstein and his production company; the accusations against Weinstein spanned sexual harassment to rape.

Under the deal, which is distinct from the criminal trial, Weinstein doesn’t have to admit any wrongdoing or pay out of pocket. The Weinstein Company foots the bill—with a quarter of the settlement covering its own legal costs. Since the Weinstein Company is in bankruptcy protection because of Weinstein’s behaviour, the plaintiffs (none of whom can receive more than $500,000) will have to line up behind other creditors. And by agreeing to the settlement, they can’t lodge further legal claims against Weinstein, his brother or the company.

The plaintiffs and their lawyers settled, they told the Times, because they believed it was the best deal they could make and they wanted to help fellow plaintiffs get whatever recompense they could. Genie Harrison, a lawyer representing a former Weinstein assistant, said she felt that holding out for more might have left other plaintiffs empty-handed.

Weinstein also still has protectors in the entertainment industry, evident when he and his entourage attended a monthly private event for emerging young talent at a New York City comedy club in October. Female performers present who voiced disapproval at Weinstein being invited were booed and heckled. At the event, comedian Kelly Bachman joked, “I didn’t realize I had to bring my own mace and rape whistle.” Later, she marvelled that Weinstein was “accepted as a normal presence in this space.” Of course, people will argue that Weinstein has not yet been convicted of any crime. His criminal trial hasn’t occurred; he’s innocent until proven guilty. But there’s another question that must be asked: Why does a united chorus of more than 80 women reporting Weinstein assaulted them, harassed them, and sidelined their careers mean nothing to many people in that comedy club?

On the weekend, Weinstein was given yet another platform to tell his story: a lengthy, “exclusive” interview in the Rupert Murdoch-owned New York Post conducted in a hospital room after the former producer’s back surgery. Still believing he can spin reality, Weinstein—who is known to ruin careers of women who didn’t submit to him— boasted about doing more than anyone in Hollywood to advance women professionally. He also used the opportunity to assert that he hadn’t faked his ailments, and that he is in pain. He’s clearly banking on himpathy. Now the question—an astounding one under the circumstances—is whether or not it will work.