Racism in Canada: 'A wake-up call to start that conversation'

A quick sampling of the response to Maclean's cover story 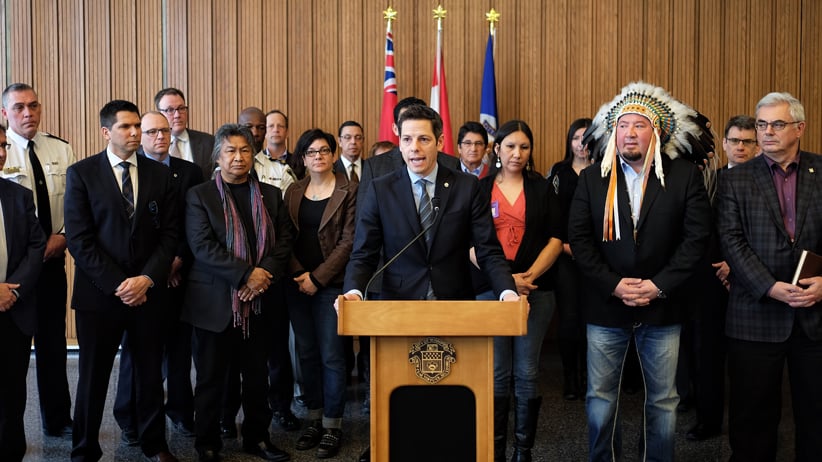 At about 9 a.m. yesterday, Mayor Brian Bowman started to read the Maclean’s cover story on Winnipeg’s race problem. The article said Canada’s racism problem is arguably at its worst in his hometown. It was not an easy read. He had to take breaks from the article in order to get through it.

Instead of lashing out at Maclean’s, Bowman quickly convened a press conference. Standing alongside prominent community leaders, Bowman said: “My wife is Ukrainian. I am Métis. I want my boys to be as proud of both those family lines — to be proud of Winnipeg.”

What follows is a sample of the next-day response to the story:

How to fix Canada’s ‘most racist’ city (Winnipeg Free Press)

“Winnipeg woke up to a body slam to the ego Thursday when Maclean’s called it Canada’s most racist city. For many it was humiliating, an epithet that’s hard to swallow in a city quick to defend its virtues. Numerous surveys that looked at racial attitude and incidents throughout Canada were cited in the article. According to the report, the Prairies scored high on prejudice toward Aboriginal people — only 61 per cent of respondents said they would be comfortable with an Aboriginal neighbour. None of this can be news to Winnipeggers.”

“Having leaders who can react maturely to a magazine article is not enough to make Winnipeg a safe and prosperous place for all Aboriginal people. It’s not enough to put an end to the odious ‘Indian jokes’ or the resentment and fear. But it is a beginning, and it’s a very good one.”

“There is something slightly patronizing about a Toronto publication presuming to tell Winnipeg something about itself. There’s also something cringe-inducing about a mayor calling a news conference to address a national publication covering many of the same issues Winnipeg media have already covered. Nonetheless, Maclean’s has done Winnipeg a service by drawing attention to a socio-economic situation of national significance.”

“Winnipeg has never needed or desired validation from Toronto, so it was ironic to see Mayor Brian Bowman surrounded by our police chief and local indigenous leaders at an emergency press conference to deal with a story from Toronto-based Maclean’s magazine, which called Winnipeg ‘the most racist city in Canada.’

“We don’t need any elites from the east to tell us that. We’ve known it for a long time.”

“The stories and the personal experiences that were reflected in that article yesterday very difficult to read. I had to put the article down several times. And I had to because … [pause] … they’re true. And while it may be upsetting for me, it’s devastating for the people involved.” Mayor Bowman

Time for healthy examination of our racism (Doug Cuthand, The Star Phoenix, Saskatoon)

“Does Canada have a greater race problem than America? It doesn’t matter, because any racism is too much. Canada doesn’t need to look elsewhere to justify its degree of racism. Instead of pointing fingers, Canadians need to look at themselves and realize that our society is based on racism, and that one race keeping another one down is wrong.”

Is our city really the ‘worst’ in Canada? (Winnipeg Free Press)

“Regardless of official or unofficial rankings, the existence of racism in Winnipeg, and the need to end it, was not in dispute.”

“Whether or not Winnipeg really is the most racist city in Canada is not the question. Whether racism is insidious or overt, why it plagues us, what is happening and can we improve this … Those are the questions.”

“On Thursday, the Manitoba city received the wake-up it needed to start that conversation, and it fell on receptive ears among community leaders. Others in the West need to pay attention because we really are little different from Winnipeg.”

“I’ve seen in my home community how much time is required before we see things start to change, and we can expect that here in Winnipeg as well. That’s why it is especially important that we start preparing our children now to understand what the original treaty relationship was all about and to look for the opportunities to put it into practice in the way we treat each other.”

Wab Kinew, Director of Indigenous Inclusion at the University of Winnipeg

Just read Nancy Mcdonald’s Maclean’s article on racism in Winnipeg. It is BANG on. #mustread

Remember when @MacleansMag ran the cover about Quebec being the most corrupt province in Canada and a lot of people got mad?

Then they called the Charbonneau inquiry… Yeah… #imnotsayingimjustsaying

As a mother and grandmother, a police officer, an MP and a proud Metis woman, I work every day to make MY city a better place. 1/2

Thank you to @Mayor_Bowman for committing to do the same. 2/2

This is how the world changes. Slowly, painfully, purposefully. Good on @MacleansMag http://t.co/4uRNBeZJ7s