Malaysian official says quake was caused by foreigners, including two Canadians, that "showed disrespect to the sacred mountain" 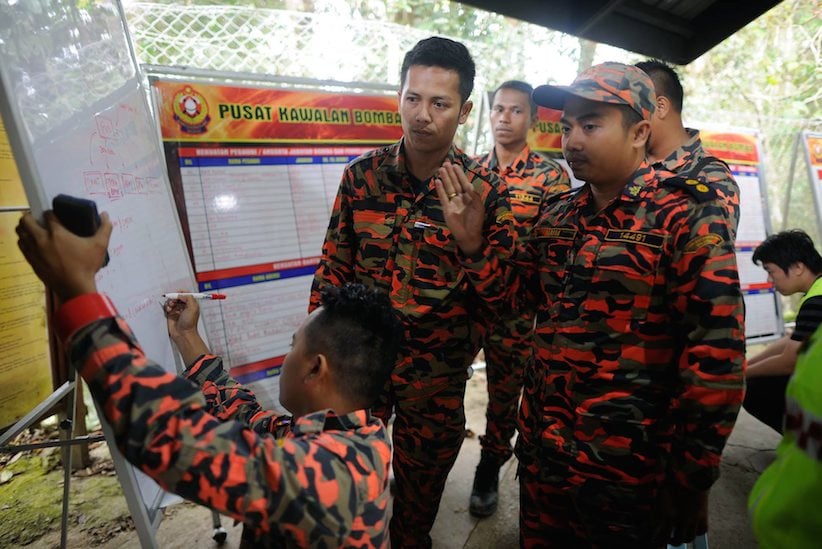 Members of a Malaysian rescue team plan as they wait for victims to be evacuated after an earthquake in Kundasang, Malaysia. (Associated Press)

A Malaysian official is blaming a group of foreigners including two Canadians for an earthquake that struck Malaysia’s highest peak on Friday, killing 13 people.

Joseph Pairin Kitingan said a special ritual would be conducted later to “appease the mountain spirit.”

Officials have said the foreigners, who included two Canadians, two Dutch and a German national, broke away from their entourage and stripped naked before taking photos at the mountain peak on May 30.

Police have said five of the tourists are believed to still be in Malaysia and will be barred from leaving on the offence of gross indecency.

Rescuers recovered the bodies of 11 climbers on Saturday. Six people remained missing on 4,095-metre high peak, where a magnitude-5.9 earthquake on Friday sent rocks and boulders raining down the trekking routes, trapping dozens of climbers.

Nine of the bodies found Saturday were flown out by helicopter, while the other two were brought down by foot, said district police official Farhan Lee Abdullah.

Most of the other climbers made it down the mountain in the darkness early Saturday, some with broken limbs and one in a coma.

Police said earlier Saturday that they were looking for 17 other people, including eight Singaporeans and one each from China, the Philippines and Japan. The rest are Malaysians. The nationalities of the 11 dead recovered Saturday were not immediately clear.

About 60 rescuers and four helicopters were combing the mountain, where loose rocks and boulders that fell during the quake blocked part of the main route.

The quake also damaged roads and buildings, including schools and a hospital on Sabah’s west coast. It also broke one of the twin rock formations on the mountain known as the “Donkey’s Ears.”

The mountain will be closed for three weeks for maintenance work, and flags will be flown at half-staff in Sabah on Monday to mourn the victims, Masidi said.