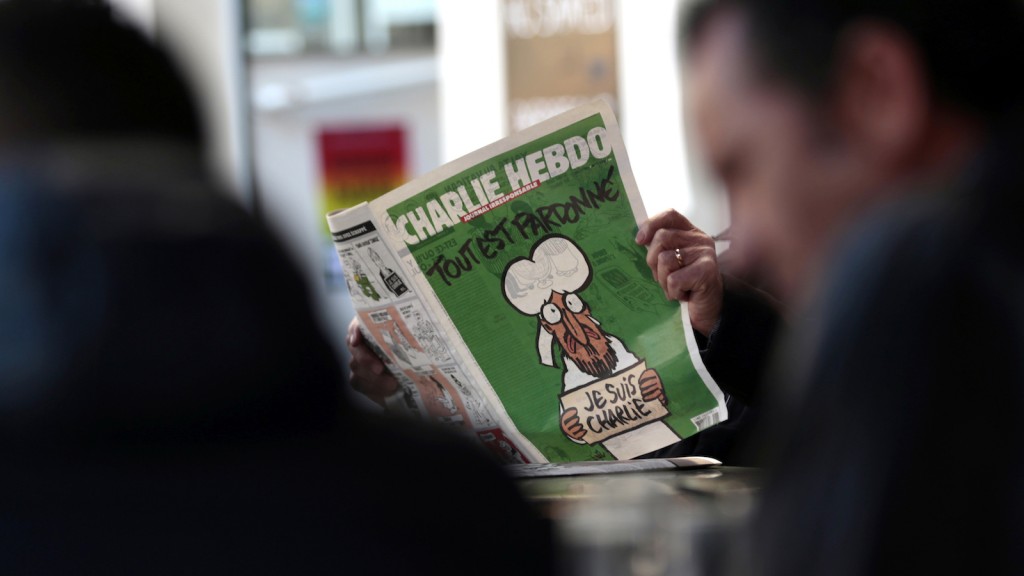 TORONTO – The Canadian distributor for the satirical magazine Charlie Hebdo says 1,500 copies of the latest issue — which features a caricature of the Prophet Muhammad on the cover — will be available in different parts of the country Friday.

Louis-Philip Vermeersch, director of sales for LMPI, says that’s up from the 100 issues that are usually delivered for distribution each week.

But he says the increased production likely won’t be enough to meet demand for the issue from those Canadians who want to see the latest copy of a magazine at the centre of an international tragedy.

Charlie Hebdo is usually only available in Quebec and one store in Toronto, but Vermeersch says distribution will be more widespread this time.

Copies will be available at five Toronto stores, one in New Brunswick, one in Nova Scotia and a handful in Vancouver in addition to its usual Quebec-based retailers.

The five Toronto stores include Gateway newsstands at Yonge and St. Clair and at BCE Place, Presse Internationale stores on Bloor St. and Queen St., and at an International News outlet on Front St.

Surviving Charlie Hebdo staff held a press conference in Paris on Tuesday to showcase the cover of the coming issue. It depicts a caricature of the Prophet Muhammad weeping and holding a sign reading “I am Charlie” with the words “All is forgiven” above him.

The latest issue also skewers other religions and features a double-page spread illustrating Sunday’s march in Paris that drew more than a million people to condemn terrorism.

“For the past week, Charlie, an atheist newspaper, has achieved more miracles than all the saints and prophets combined,” reads the lead editorial in the new issue. “The one we are most proud of is that you have in your hands the newspaper that we always made.”

Charlie Hebdo’s publisher has indicated that it’s increasing production of this week’s issue to an unprecedented three million copies worldwide, but Vermeersch said there is no guarantee any of the additional copies will make there way to Canada.

“This is just supply to meet domestic demand in France,” Vermeersch said in a telephone interview. “We are trying to get another run, but we have no confirmation whatsoever at the moment.”

Vermeersch said he expects the magazine to be on newsstands by noon on Friday.

The attack on the magazine marked the beginning of three days of terror that saw 17 people killed in separate incidents. The three gunmen responsible, all of whom claimed ties to Islamic extremists in the Middle East, were killed by security forces.