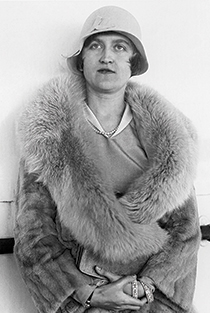 Update: NBC News reports via Bill Dedman that the Sept. 17 start of the trial has been delated to try to reach a settlement. A jury is now scheduled to be selected on Thursday morning.

When Huguette Clark, a 104-year-old heiress worth $300 million, died in a New York City hospital two years ago she hadn’t been rushed there from one of her three vast Fifth Avenue apartments or her nine-bedroom retreat in Connecticut or her grand clifftop estate in Santa Barbara, Calif. She’d been in nondescript hospital rooms for 20 years already, not because of illness but because she preferred them to the lonely luxury of her own homes. Chronicled extensively in her youth, Clark had long vanished from the public eye until NBC News journalist Bill Dedman stumbled across an online mention of her Connecticut home in 2009. Curious as to who would own a $24-million estate for six decades without ever having lived there, Dedman uncovered a saga of “mystery and extravagance” so unbelievable that it “pushed me from mild interest to fascination.”

His biography, Empty Mansions: The Mysterious Life of Huguette Clark and the Spending of a Great American Fortune, written with Paul Clark Newell Jr., a distant relation of Clark, came out this week. And next week 19 relatives will head into a New York City courtroom seeking to overturn Clark’s last will, which shut them out in favour of creating a foundation to protect the Santa Barbara estate and giving $30 million to her private nurse, plus other bequests. Though none of the relatives remember meeting her after 1957, they claim she was mentally ill and taken advantage of by her lawyer, caregivers and other hangers-on. If successful, they will inherit everything. Yet their case could be hard to prove. Records examined by Dedman and Newell, who isn’t a plaintiff, show a “surprisingly strong-willed” woman who kept in touch with people through phone calls and correspondence. Though she admitted to being “peculiar”—she loved the Smurfs and was obsessed with dolls—a rich woman’s “eccentricity is not a psychiatric disorder,” the book states.

Clark was born into obscene wealth and luxury, the youngest child of W.A. Clark, a self-made copper and railway magnate, and his much younger second wife, Anna. Her childhood home was New York’s largest, a 121-room behemoth on Fifth Avenue that boasted five art galleries, a staff organist and “a bathroom for every day of the month,” Dedman notes. Summers were spent at a French castle with her parents and older sister, Andrée. The idyll didn’t last. In 1919, her sister died of meningitis and in 1925 her father died. Along with her four older half-siblings, Clark, then 18, inherited one-fifth of his estate, which would have been worth billions today.

Never close to the rest of the Clark family, she and her mother moved out of the mansion, downsizing to a 17-room top-floor apartment in a luxury Fifth Avenue building. Later Huguette Clark bought two more in the same building. Shy and intensely private, she wed the son of her father’s accountant in 1928, but the marriage swiftly ended amid speculation it was never consummated.

Clark and her mother spent freely on artistic endeavours. In 1945, when cellist Robert Maas mentioned that four instruments by Stradivari previously owned by Nicolò Paganini were for sale as a group, Anna took a Cézanne that her daughter didn’t like off the wall and immediately sold it, using the proceeds to buy the instruments. She then ordered Maas to create the Paganini Quartet.

For her daughter, increasing amounts of time and money were spent buying dolls, outfitting them and creating exquisite dollhouses. “Her dolls,” explained friend Suzanne Pierre, were “her closest companions.” Cabinetmaker Rudolph Jaklitsch’s phone could ring six times a night as Clark made tiny, exacting changes to her dollhouse orders. After Jaklitsch died, Clark kept the money flowing to his widow, children and grandchildren. She was staggeringly generous, regularly sending “little gifts,” often in the form of cheques for tens of thousands of dollars. And in return, those children would send letters and pictures to their “good fairy.”

After her mother’s death in 1963, she rarely ventured out of her New York apartment. Even the spectacular estate in Santa Barbara was abandoned, though Clark had it immaculately maintained. Part of the issue, Dedman says, was that she feared change. As friends and workers passed out of her life, they weren’t replaced.

Her isolation became a crisis in 1991 when untreated cancers ate away at her lip, making it impossible to eat. She was hospitalized, but once back in good health, the heiress would never leave. “There was safety and security and round-the-clock staff,” Dedman explains. Clark continued collecting dolls. And she kept “treating money like it was water,” Dedman recounts, including spending $800,000 to create a replica of her mother’s bedroom in her own apartment, rather than just moving Anna’s furniture.

Inevitably, the toll of aging crept up on her. As Dedman began raising questions about how her fortune was being managed and spent—she died owing the IRS $82 million in gift taxes—the authorities and her family started investigating. It turns out Clark gave away more than $30 million to nurse Hadassah Peri and her family, including six residences and even a Bentley.

Huguette Clark may have been a fairy godmother to those who benefited from her “little gifts,” but with her will about to be contested, the tales about to be told in a public courtroom are undoubtedly ones she would not enjoy.