A gunman opened fire inside crowded gay Orlando nightclub Pulse, before being killed by SWAT officers 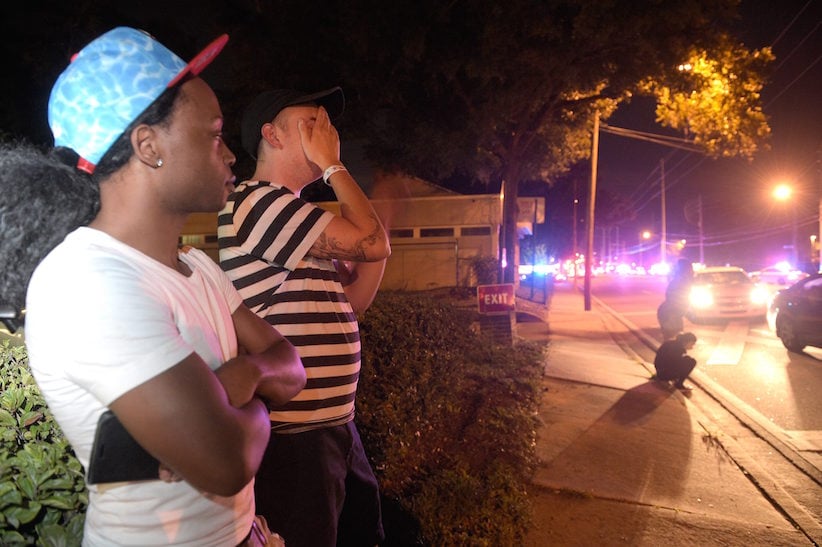 Jermaine Towns, left, and Brandon Shuford wait down the street from a multiple shooting at a nightclub in Orlando, Fla., Sunday, June 12, 2016. Towns said his brother was in the club at the time. A gunman opened fire at a nightclub in central Florida, and multiple people have been wounded, police said Sunday. (AP Photo/Phelan M. Ebenhack)

ORLANDO, Fla. — A gunman wielding an assault-type rifle and a handgun opened fire inside a crowded gay nightclub early Sunday, killing at least 50 people before dying in a gunfight with SWAT officers, police said. It was the deadliest mass shooting in modern U.S. history.

Authorities were investigating the attack on the Florida dance club as an act of terrorism. The gunman’s father recalled that his son recently got angry when he saw two men kissing in Miami and said that might be related to the assault.

At least 53 people were hospitalized, most in critical condition, officials said. A surgeon at Orlando Regional Medical Center said the death toll was likely to climb.

All of the dead were killed with the assault rifle, according to Rep. Alan Grayson, a Florida Democrat.

MORE: Scott Gilmore on the one thing the Orlando shooting will change

Witnesses described a chaotic scene when the gunfire began shortly before the club known as Pulse was to close.

“Some guy walked in and started shooting everybody. He had an automatic rifle, so nobody stood a chance,” said Jackie Smith, who had two friends next to her get shot. “I just tried to get out of there.”

The suspect was identified as Omar Mateen, a 29-year-old American citizen from Port St. Lucie, Florida, who had worked as a security guard. Mateen’s ex-wife said his family was from Afghanistan but that her ex-husband was born in New York. His family later moved to Florida.

The shooter in 2013 made inflammatory comments to co-workers, and Mateen was interviewed twice, Hopper said. He called those interviews inconclusive.

In 2014, Hopper said, officials found that Mateen had ties to an American suicide bomber. He described the contact as minimal, saying it did not constitute a threat at the time.

Mateen purchased at least two firearms legally within the last week or so, according to Trevor Velinor of the Bureau of Alcohol, Tobacco and Firearms. 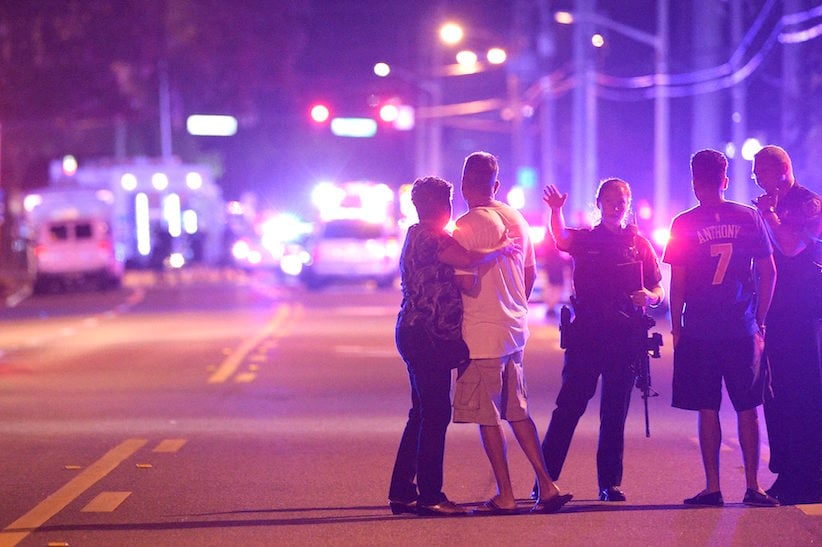 The suspect exchanged gunfire with 14 police officers at the club, which had more than 300 people inside.

At one point, he took hostages, Police Chief John Mina said. Around 5 a.m., authorities sent in a SWAT team to rescue the hostages.

Pulse posted on its own Facebook page around 2 a.m.: “Everyone get out of Pulse and keep running.” Just before 6 a.m., the club posted an update: “As soon as we have any information, we will update everyone. Please keep everyone in your prayers as we work through this tragic event. Thank you for your thoughts and love.”

In addition to the assault rifle, the shooter also had some sort of “suspicious device,” the police chief said.

In the immediate aftermath of the attack, police departments across the country stepped up patrols in neighbourhoods frequented by the LGBT community.

Authorities were looking into whether the attack was an act of domestic or international terrorism, and if the shooter acted alone, according to Danny Banks, an agent with the Florida Department of Law Enforcement.

“This is an incident, as I see it, that we certainly classify as domestic terror incident,” Orange County Sheriff Jerry Demings said.

The previous deadliest mass shooting in the U.S. was the 2007 attack at Virginia Tech, where a student killed 32 people before killing himself. 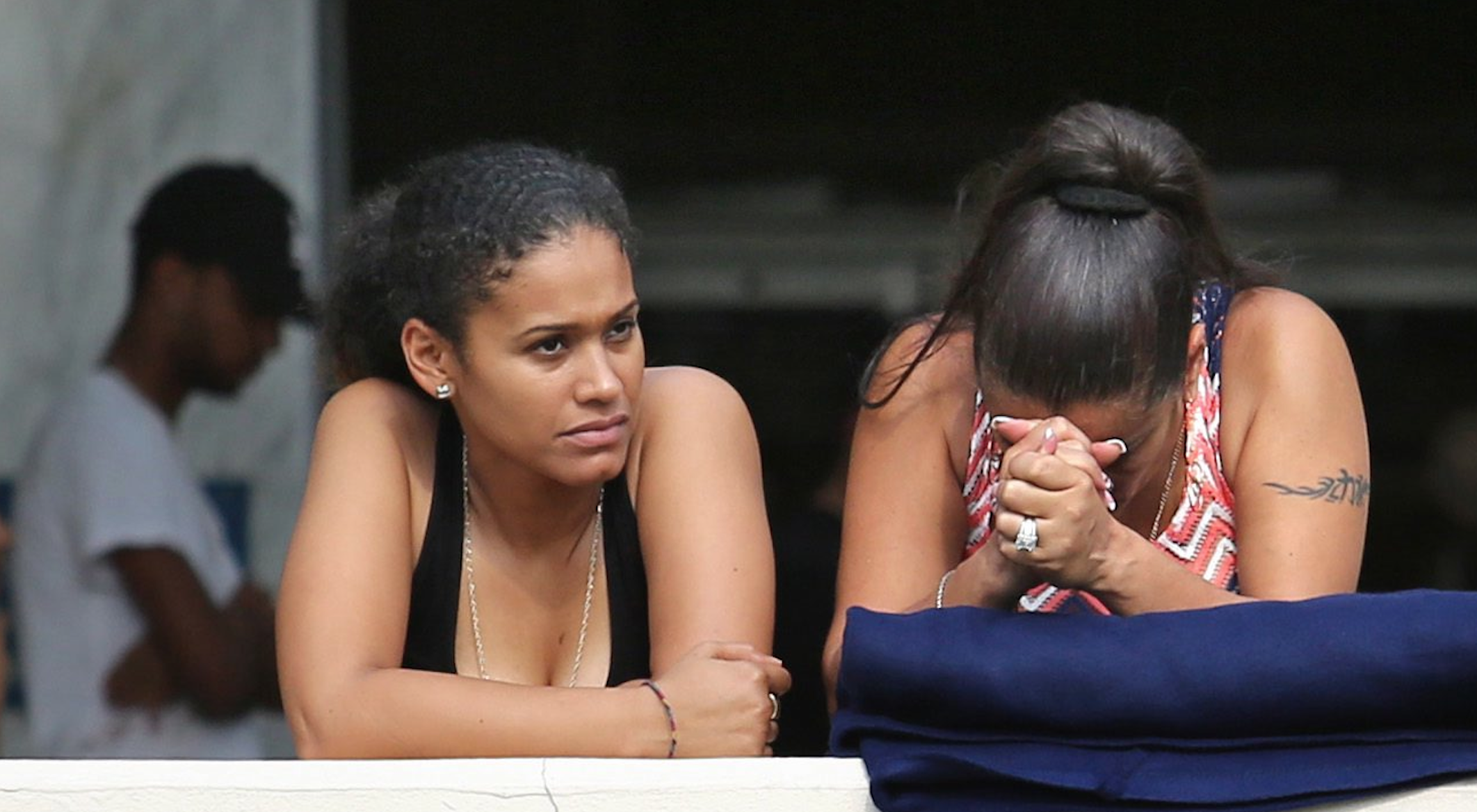 Mateen’s father, Seddique Mir Mateen, told NBC News about his son seeing the men kissing a couple of months ago.

“We are saying we are apologizing for the whole incident,” Seddique said. “We are in shock like the whole country.”

A federal law enforcement official with knowledge of the investigation said Mateen was known to the FBI before the nightclub attack and had been looked at by agents within the last few years. The official was not authorized to discuss the investigation publicly and spoke on condition of anonymity.

The matter for which he came under investigation was “open and closed pretty quickly,” the official said.

When asked if the gunman had a connection to radical Islamic terrorism, Hopper said authorities had “suggestions that individual has leanings towards that.”

Mateen’s father said the attack had nothing to do with religion, he said.

The gunman was a security guard with a company called G4S. In a 2012 newsletter, the firm identified him as working in West Palm Beach.

In a statement sent Sunday to the Palm Beach Post, the security company confirmed that he had been an employee since September 2007.

State records show that Mateen had held a firearms license since at least 2011. It was set to expire in 2017.

President Barack Obama called the shooting an “act of terror” and an “act of hate” targeting a place of “solidarity and empowerment” for gays and lesbians. He urged Americans to decide whether this is the kind of “country we want to be.”

Authorities said they had secured a van owned by the suspect outside the club. Meanwhile, a SWAT truck and a bomb-disposal unit were on the scene of an address associated with Mateen in a residential neighbourhood of Fort Pierce, Florida, about 118 miles southeast of Orlando. 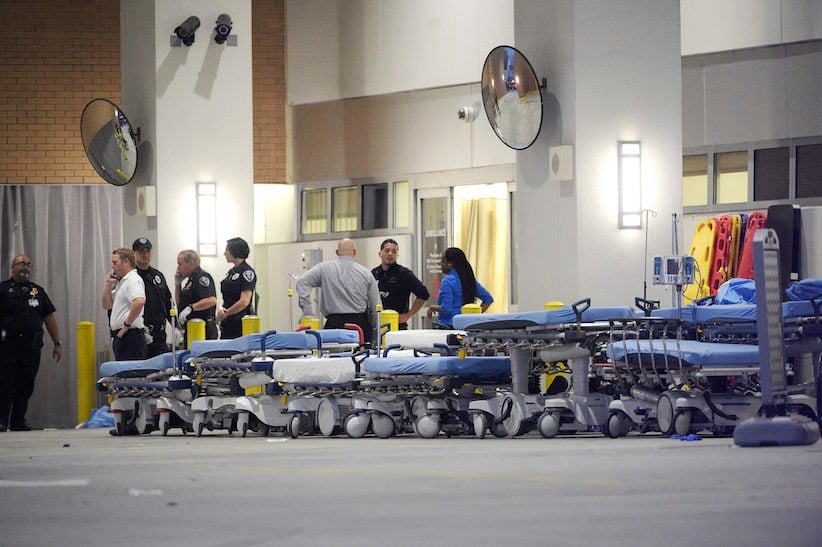 Emergency personnel wait with stretchers at the emergency entrance to Orlando Regional Medical Center hospital for the arrival of patients from the scene of a fatal shooting at Pulse Orlando nightclub in Orlando, Fla., Sunday, June 12, 2016. (AP Photo/Phelan M. Ebenhack)

Relatives and friends, many in tears, gathered outside the hospital to learn the fate of loved ones.

Smith did not know the conditions of her wounded friends. She came out of the hospital and burst into tears.

Christine Leinonen drove to Orlando at 4 a.m. after learning of the shooting from a friend of her 32-year-old son, Christopher Leinonen, who was at Pulse and is missing.

She had not heard from her son and feared the worst.

“These are nonsensical killings of our children,” she said, sobbing. “They’re killing our babies!”

She said her son’s friend Brandon Wolf survived by hiding in a bathroom and running out as the bullets flew.

A woman who was outside the club early Sunday was trying to contact her 30-year-old son, Eddie, who texted her when the shooting happened and asked her to call police. He told her he ran into a bathroom with other club patrons to hide. He then texted her: “He’s coming.”

“The next text said: ‘He has us, and he’s in here with us,’ ” Mina Justice said. “That was the last conversation.”

MORE: Caught in the shooting, a son’s heartbreaking texts to his mom 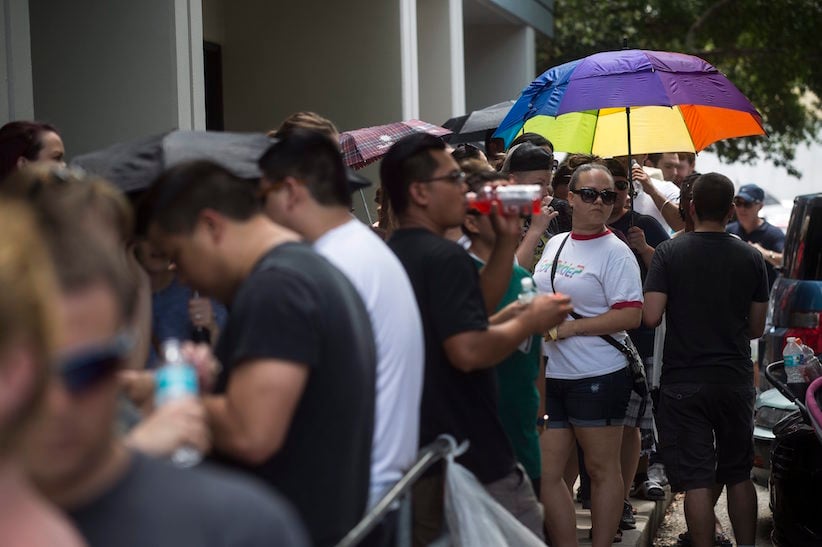 Hundreds of volunteers line up to donate blood at OneBlood Center after the late night shooting at Pulse, an Orlando night club, on Sunday, June 12, 2016 in Orlando. A gunman wielding an assault-type rifle and a handgun opened fire inside a crowded Florida nightclub before dying in a gunfight with SWAT officers, police say. The attack left at least 50 people dead, making it the worst mass shooting in American history. (Zack Wittman/Tampa Bay Times via AP)

A bartender said she initially thought the gunshots were music. But after a second shot, there was a pause, followed by more shots. That’s when Tiffany Johnson realized something was wrong.

Johnson said people dropped to the ground and started running out of the club. She ran to a fast-food restaurant across the street and met one of her customers who let her get in his car. They drove away.

Club-goer Rob Rick said the shooting started just as “everybody was drinking their last sip.”

He estimated more than 100 people were still inside when he heard shots, got on the ground and crawled toward a DJ booth. A bouncer knocked down a partition between the club area and an area where only workers are allowed. People were then able to escape through the back of the club.

Christopher Hansen said he was in the VIP lounge when he heard gunshots. He continued to hear shooting even after he emerged and saw the wounded being tended across the street.

The attack follows the fatal shooting late Friday of 22-year-old singer Christina Grimmie, a YouTube sensation and former contestant on “The Voice.” She was killed after an Orlando concert by a 27-year-old man who later killed himself.