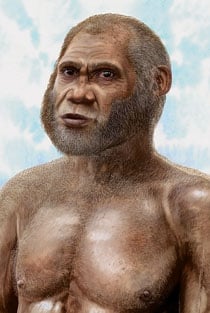 Fossils unearthed in southern China by a team of Australian and Chinese researchers may point to a new species in the human evolutionary tree. The partial skulls and bone fragments are believed to be between 14,500 and 11,500 years old, and do not closely resemble anatomically modern humans. The study by the researchers suggests that the potentially “late surviving archaic population,” named the Red Deer Cave people for their apparent love of venison, roamed alongside China’s earliest established people. Until now, no hominid fossils less than 100,000 years old have been found in mainland eastern Asia.

University of New South Wales evolutionary biologist Darren Curnoe, the study’s lead author, says the skulls have “a mosaic of archaic and modern” facial features and differ from modern humans in their jutting jaws, large molar teeth, prominent brows, thick skulls, flat faces and broad noses. “While finely balanced, I think the evidence is slightly weighted toward the Red Deer Cave people representing a new evolutionary line,” Curnoe told the Guardian. “They look very different to all modern humans, whether alive today or in Africa 150,000 years ago.”

But Curnoe is reluctant to classify the team’s finding as a new human species—and he isn’t alone. Other scientists have reacted critically to the study, published in the journal PLoS One. Even Curnoe admits there is a good reason: “In the science of human evolution or paleoanthropology, we presently don’t have a generally agreed, biological definition for our own species,” he told BBC News. Instead, the evidence may just tell us what we already know: humans are a very diverse species.

“I would be surprised if it really was a new human group that was previously undiscovered,” Philipp Gunz, a physical anthropologist at the Max Planck Institute for Evolutionary Anthropology in Germany, told National Geographic’s website. “Modern humans are exceptionally variable, especially if you compare modern humans to our closest fossil relatives, the Neanderthals.” Still, Homo sapiens or not, the Red Deer discovery “indicates that the evolutionary history of humans in East Asia is more complex than has been understood until now,” the study claims. So far, attempts to extract DNA from the fossils have been unsuccessful.