A bureaucracy of terror: Life under Islamic State rule

From 'repentance cards' to deadly punishment of those in defiance, Islamic State's 'caliphate' demands strict obedience 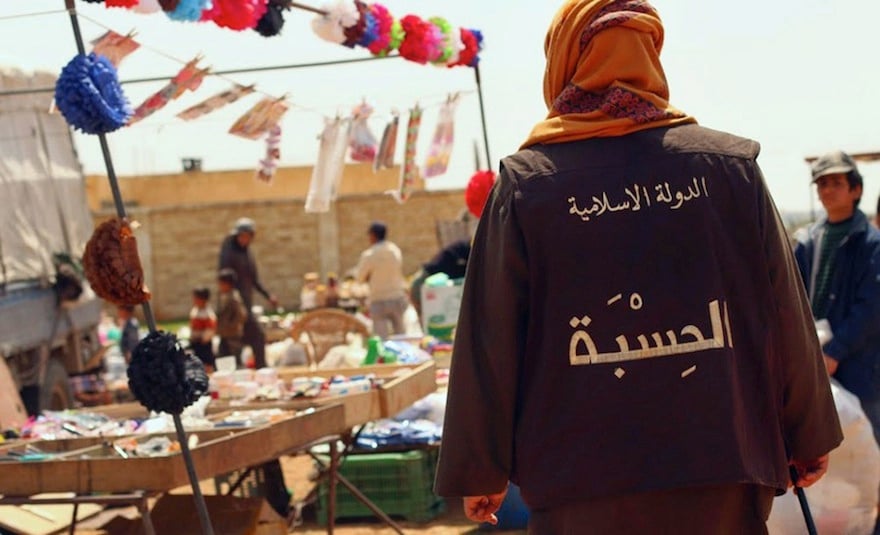 In this photo released on April 17, 2015 by a militant website, which has been verified and is consistent with other AP reporting, a member of the Islamic State group’s vice police known as “Hisba,” patrols a market in Raqqa City, Syria. The Arabic words on the vest read, “The Islamic State – Hisba (vice police).” (Militant website via AP)

ESKI MOSUL, Iraq — When the Islamic State fighters burst into the Iraqi village of Eski Mosul, Sheikh Abdullah Ibrahim knew his wife was in trouble.

Buthaina Ibrahim was an outspoken human rights advocate who had once run for the provincial council in Mosul. The IS fighters demanded she apply for a “repentance card.” Under the rule of the extremist group, all former police officers, soldiers and people whose activities are deemed “heretical” must sign the card and carry it with them at all times.

“She said she’d never stoop so low,” her husband said.

Buthaina Ibrahim was an outlier in her defiance of the Islamic State. It would cost her dearly.

The “caliphate,” declared a year ago, demands obedience. Untold numbers have been killed because they were deemed dangerous to the IS, or insufficiently pious; 5-8 million endure a regime that has swiftly turned their world upside down, extending its control into every corner of life to enforce its own radical interpretation of Islamic law, or Shariah.

The Islamic State is a place where men douse themselves with cologne to hide the odour of forbidden cigarettes; where taxi drivers or motorists usually play the IS radio station, since music can get a driver 10 lashes; where women must be entirely covered, in black, and in flat-soled shoes; where shops must close during Muslim prayers, and everyone found outdoors must attend.

There is no safe way out. People vanish — their disappearance sometimes explained by an uninformative death certificate, or worse, a video of their beheading.

“People hate them, but they’ve despaired, and they don’t see anyone supporting them if they rise up,” said a 28-year-old Syrian who asked to be identified only by the nickname he uses in political activism, Adnan, in order to protect his family, which still lives under IS rule. “People feel that nobody is with them.”

Related: There’s a way to defeat Islamic State. But it will be hard and unpopular.

The Associated Press interviewed more than 20 Iraqis and Syrians describing life under the group’s rule. One AP team travelled to Eski Mosul, a village on a bend in the Tigris River north of Mosul where residents emerged from nearly seven months under IS rule after Kurdish fighters drove the extremists out in January. IS forces remain dug in only a few miles away, so close that smoke is visible from fighting on the front lines.

Another AP team travelled to the Turkish border cities of Gaziantep and Sanliurfa, refuges for Syrians who have fled IS territory.

The picture they paint suggests the Islamic State’s “caliphate” has evolved into an entrenched pseudo-state, based on a bureaucracy of terror. Interviewees provided AP with some documents produced by the IS ruling machine — repentance cards, lists inventorying weapons held by local fighters, leaflets detailing rules of women’s dress, detailed forms for applying for permission to travel outside IS territory. All emblazoned with the IS black banner and logo “Caliphate in the path of the prophet.”

Adnan described the transformation that the Syrian city of Raqqa underwent after the Islamic State took it over in January 2014. At the time, he fled, but after a few months of missing his family, the 28-year-old returned to see if he could endure life under the extremists. He lasted for almost a year in the city, now the IS de facto capital. He spoke to AP in the Turkish border town of Gaziantep. 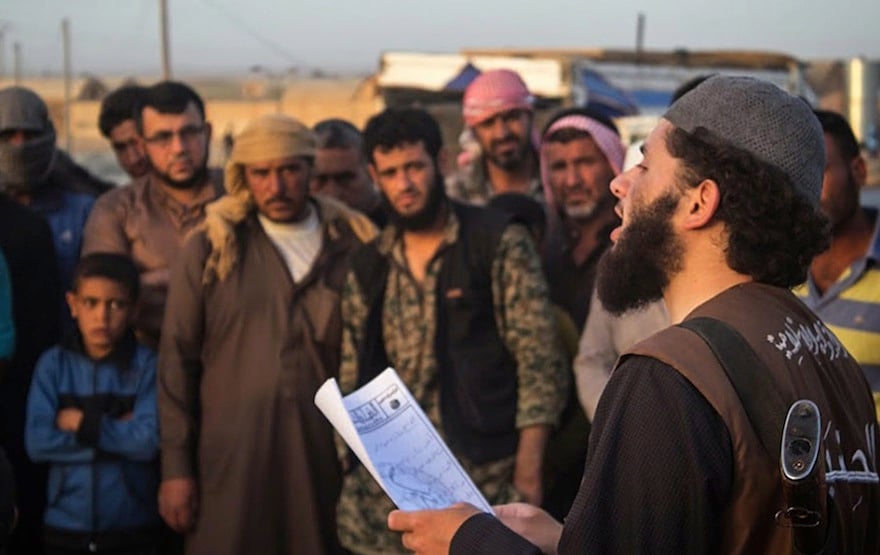 In this photo released on May 14, 2015 by a militant website, which has been verified and is consistent with other AP reporting, a member of the Islamic State group’s vice police known as “Hisba,” right, reads a verdict handed down by an Islamic court sentencing many they accused of adultery to lashing, in Raqqa City, Syria. (Militant website via AP)

The once colourful, cosmopolitan Syrian provincial capital has been transformed, he said. Now, women covered head to toe in black scurried quickly to markets before rushing home. Families often didn’t leave home to avoid any contact with the “Hisba” committees, the dreaded enforcers of the innumerable IS regulations.

IS fighters turned a soccer stadium into a prison and interrogation centre, known as “Point 11.” The city’s central square was referred to by residents as “Jaheem” Square — Hell Square, an execution site where Adnan said he saw the corpses of three men left dangling for days as a warning.

Armed members of the Hisba patrolled the streets, cruising in SUVs and wearing Afghan-style baggy pants and long shirts. They sniffed people for the odour of cigarettes, and chastised women they considered improperly covered or men who wore Western clothes or hair styles. Adnan said he once was dealt 10 lashes for playing music in his car.

Related: Is the fight against Islamic State reaching its Gettysburg moment?

In this world, the outspoken Buthaina Ibrahim was clearly in danger. The sheikh tried to save his wife, sending her away to safety, but she soon returned, missing their three daughters and two sons, he said. In early October, the militants surrounded the house and dragged her away.

Not long after, Ibrahim received the death certificate. A simple sheet of paper from an “Islamic court” with a judge’s signature, it said only that Buthaina’s death was verified, nothing more. He has no idea where her body is.

Delivery from IS came to Eski Mosul at the hands of Kurdish fighters. Amid the joy over liberation, many residents discarded documents from the Islamic State.

But Ibrahim is keeping the death certificate as a connection to his wife, “because it has her name on it.”

A former soldier in the village, Salim Ahmed, said he is keeping his repentance card. IS might be gone, but the fear it instilled in him is not.

“We live very close to their front line,” he said. “One day, they might come back and ask me for my repentance card again.”