A Canadian guide to the 2016 U.S. election debates

Here are the main issues that Clinton and Trump will hit on, and what Canadians need to know about why they matter 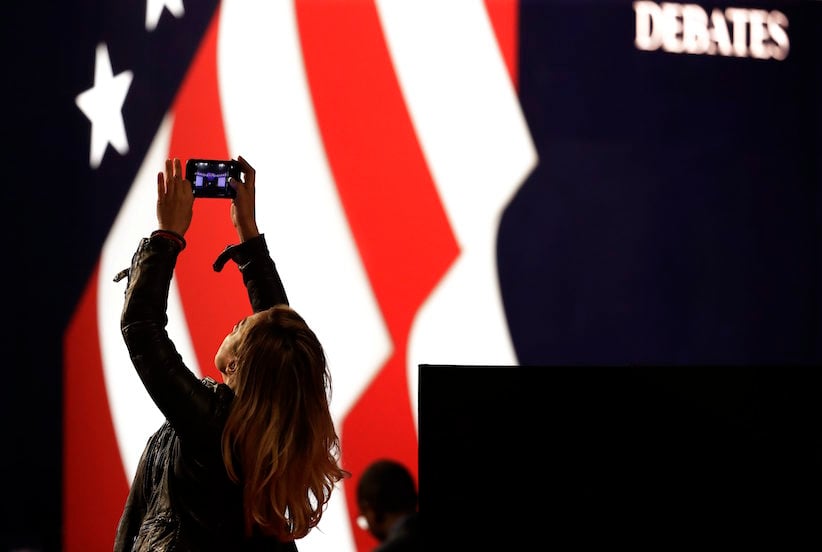 When America’s three presidential debates take place this election cycle, it won’t be just Americans watching. Canadians will be keeping a keen eye too. So here’s a primer on not only what you should expect Hillary Clinton and Donald Trump to talk about, but what Canadians should know about why these issues matter so much to Americans.

Health care
Clinton’s most famous failure was her role in selling Bill Clinton’s attempt to pass universal health care in the U.S. Barack Obama finally succeeded where the Clintons didn’t, but “Obamacare,” as it’s often called, remains broadly unpopular. Clinton has made some proposals for expanding coverage, but discussions of health care haven’t even been as big a factor in this campaign as discussions of Clinton’s own health. But since Trump is playing to the Republican base by promising to repeal Obamacare, Clinton may want to emphasize her intention to fix and expand the program instead: it’s one of the few issues where she can successfully run to the left of both Trump and Obama.

What Canadians need to know: Canada, like most other Western countries, made its peace with the principle of universal health care a long time ago; conservative parties rarely question it. In the U.S., conservative opposition to “government health care” is much stronger, even among older people who get government health care in the form of the Medicare program. Though Bernie Sanders ran to the left of Clinton by calling for Canadian-style single-payer health care, it’s not going to happen, which is why Obamacare wound up as a patchwork of public and private programs that’s much less popular than Canada’s system.

Gender equality
Unlike Barack Obama, Hillary has never been able to get much traction with the historic nature of her candidacy: everyone mentions that she’d be the first woman president, but she’s just too familiar to be portrayed as an inspirational game-changer. But going head-to-head against Trump, who often comes off as what used to be called a male chauvinist pig, it will be in her interest to play up her commitment to female equality in the home and the workplace. Not only will it help re-establish her pioneer status, it might goad Trump into saying something that will hurt him with women.

What Canadians need to know: Trump is less popular with Republican women than he is with Republican men. His daughter Ivanka has tried to move him left on women’s issues, but if he slips back into talking beauty pageant enterpreneur, it could re-enforce the doubts voters have about his fitness for the job.

Taxing the rich
One of the most high-profile announcements Clinton made in the week before the debate was her plan to raise the top bracket on the estate tax. Meanwhile, Trump has promised to repeal that tax altogether. Expect Clinton to emphasize the distinction between her plans to tax the rich and Trump’s plan to cut their taxes: it could help win over the Bernie Sanders voters, while calling attention to one of the issues where Trump is a conventional Republican.

What Canadians need to know: Canada does not technically have an inheritance tax, though there are still lots of taxes to pay on an estate. The U.S. still has one, though, and repealing it has been a Republican cause for a long time. Republicans often refer to it as “the death tax” to make it sound as unappealing as possible.

Police brutality
The fatal shooting of Keith Lamont Scott in Charlotte, N.C., has focused additional attention on the issue of police violence against civilians. It’s an issue that voters don’t always trust Clinton on because of her association with 1990s “tough-on-crime” policies and her occasional impatience with Black Lives Matter activists’ lack of pragmatism. Clinton is likely to counter her Republican opponent’s ’90s-style “law and order” talk with talk of the need to reform police departments and make them more accountable—an idea that recently had support even from some Trump allies, but which Republicans have mostly backed away from.

What Canadians need to know: Because of the high crime rates U.S. cities were known for in the 1970s and 1980s, Democrats like the Clintons felt it was necessary to move right on crime, which explains why Hillary Clinton was talking about “super-predators” in 1996. Now crime rates may be inching up but remain low by historical standards, which makes it hard to tell whether conservative or liberal crime policies will be more popular with the voters. And of course, crime issues in the U.S. are complicated by the fact that the U.S. has a lot more guns floating around than Canadians do.

It’s unlikely that the debate will avoid mention of the growing protests in Charlotte—the latest in a long list of U.S. cities where citizens are gathering in droves to protest a police officer killing a black person. But Trump will seek to balance an unwavering support for police enforcement—he sees himself as the “law and order” candidate—while also desperately trying to make inroads with black voters. His earlier pitches to black voters have focused on the notion that race relations have worsened under Barack Obama (“What have you got to lose?”).

Trump likely won’t bring up his recent proposal to expand police “stop and frisk” tactics—stopping pedestrians and frisking them for weapons or contraband—an unpopular practice (not to mention deemed unconstitutional in New York City) among African-Americans who are disproportionately targeted. Instead, expect Trump to emphasis the role of drugs on inner city crime, while pointing out murder statistics among African-Americans in his promise for a national anti-crime agenda.

What Canadians need to know: Canada has its own problems with police forces unjustly targeting black people, but it’s not nearly at the same tipping point as it is in the U.S. When Keith Scott, a father of seven, was shot dead in Charlotte on Tuesday, it marked the 214th time this year that a black person was killed by a police officer in the country. Americans are protesting in the streets. Many black athletes, following the lead of NFL quarterback Colin Kaepernick, are refusing to stand for the national anthem. All the while, Obama is encouraging black voters to get out the vote for Clinton, saying if they don’t, “I will consider it a personal insult to my legacy.”

Trump has one big carrot dangling in front of the Republicans who may be skeptical of voting him into the White House: the Supreme Court. To offset the Republican “Never Trumps,” as some call them, Trump has compiled a list of potential candidates for Supreme Court justice. The shortlist of names are all judges and justices with strong conservative values, while Trump also added Republican Sen. Mike Lee—a favourite among the Tea Party conservatives—as a way of further enticement.

What Canadians need to know: The nine-person Supreme Court is currently shorthanded with the recent passing of Antonin Scalia. And since then, it’s seen its share of 4-4 votes. Half of the justices are more liberal, while the other half have more conservative leanings. The next Supreme Court justice appointee, which the next president gets to choose, will be a deciding vote in many cases for years to come. While there is one current opening, two other justices (both with liberal leanings) are over the age of 80, so it’s possible a Trump presidency could keep the Supreme Court balance of power conservative for long after his presidency is over.

Before anyone thought Trump had even a remote chance of being the Republican nominee, everyone thought his plan to build a wall between U.S. and Mexico—one the Mexicans would pay for, no less—would alone be enough to disqualify his chances of winning. Wrong. Expect Trump to repeat his plans for the wall (or for Clinton to bring it up as a way to encourage Hispanic voters into backing her).

To address fears of domestic terrorism, Trump will also likely talk up plans to slow down the flow of refugees, namely Syrian refugees that he warns could have ties to ISIS. (His son infamously tweeted “If I had a bowl of skittles and I told you just three would kill you, would you take a handful? That’s our Syrian refugee problem.”) As for those accusations of xenophobia, Trump will replay that he’s pro legal immigration.

What Canadians need to know: Since November 2015, Canada was welcomed more than 30,000 Syrian refugees. America in the last year, despite being a much bigger country in terms of its population, has welcomed about 10,000 of them. Trump says that’s still too many. A recent string of domestic terror incidents during this election cycle (in New York, New Jersey, Minnesota and Florida) mean his fearful message resonates with many voters.

On immigration, Trump’s wall speaks to a pressing issue in America. The U.S. is home to more than 11 million unauthorized immigrants (that’s about 1/3 of Canada’s entire population), according to Pew research data, with more than half of them being from Mexico. Canada has a wildly different, far more positive experience with immigration.

Clinton and many Republican politicians back various forms of immigration reform. Trump has struck a chord with his hardline response to the problem.

Trump hates the media, but he sure loves to repeat the polls they publish—so long as they are working in his favour. While there is no policy substance in talking about polls, Trump will likely bring them up if only to tell the country about how the momentum is behind him. How does this help him out? Well, he’ll likely say that he’s polling well among black voters (which he isn’t, though his numbers have improved) as a way to get more African-Americans comfortable with the prospect of voting for him. But more so, the enthusiasm may encourage his supporters to get out the vote.

What Canadians need to know:  In the past month, Trump has gone from what looked like a landslide loss to having a legitimate path to the White House. The polling aggregation site FiveThirtyEight gives Trump almost a 40 per cent chance of winning, based on current polling data. The New York Times gives Trump worse odds—a 27 per cent chance of winning—explaining that’s the same odds an NFL kicker misses a 45-yard-field goal. Bad analogy because you don’t watch  football? Let’s just say Trump can actually win this thing.