A century later, remembering the hard win at Vimy Ridge

Vimy was not our finest military hour. But it's an entry point into World War One for many Canadians—and is worthy of a pilgrimage 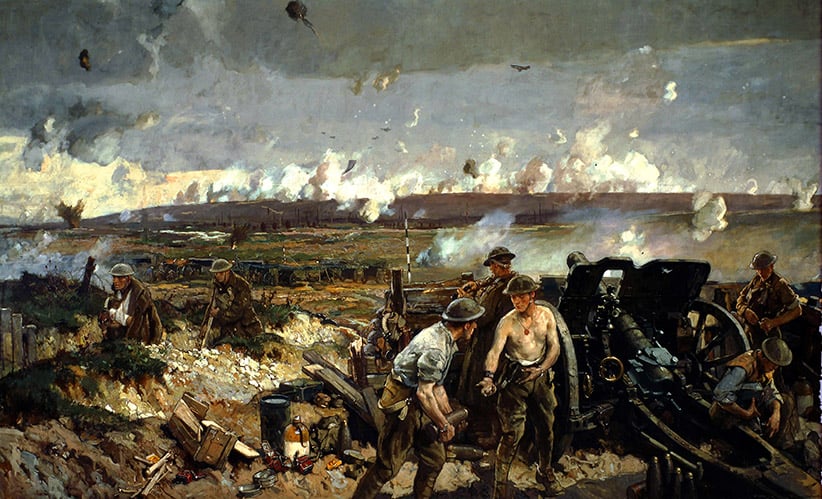 On April 9, 1917, the bloodiest day in our military history, the Canadian Corps captured the entrenched German positions on Vimy Ridge in northern France. After weeks of training and an unprecedented artillery barrage—shells were fired at the rate of 3,000 a minute in the final days—15,000 soldiers stormed the ridge at 5:30 a.m. Fighting together for the first time, Canadians from all four of the corps’s divisions soon entered the maelstrom that lay at the centre of the Great War’s industrial-scale slaughter. Hill 145, the ridge’s heavily defended high point—where the Vimy monument now stands­—was taken by a bayonet charge against machine guns. After three more days, victory was achieved, but at heavy cost: 3,598 killed and 7,004 wounded.

On April 9, 2017, Canadians will return to Vimy in numbers scarcely seen since the battle to commemorate that victory and that sacrifice. Perhaps 30,000 in all, says Jeremy Diamond, executive director of the Vimy Foundation, including 10,000 to 15,000 high school students. “This is the locus,” he says, “the entry point into the whole war experience. Canadians don’t have a lot of those—people feel they have to be historians to grasp the war. That’s why we think every Canadian should go on a pilgrimage—we use that word deliberately—to the place where the world noticed us doing something great as Canadians.”

MORE: The anniversaries worth commemorating in 2017

But there is no straight line between short, sharp victory and pilgrimage, points out military historian Tim Cook, whose forthcoming book Vimy, set to be released a month before the centenary, will cover “the rise and fall and rise” of our national icon of remembrance. Cook says Vimy is significant—adding grimly, “We bled for it”—and an achievement that captured popular imagination at the time. But it is not, arguably, our greatest military accomplishment. It certainly helped hone the corps, after a painful two-year learning curve, into the elite-troop status confirmed by future struggles at Hill 70, Passchendaele and, above all, the famous 100 days that would finish the war. If Cook had to pick our finest (military) hour, he says he’d opt for the Battle of the Drocourt-Quéant Line on Sept. 2, 1918, even if “it doesn’t trip off the tongue.”

Related: 1916 marked the point of no return in the Great War

So how did Vimy become all that it means now? After the war, a parliamentary committee considered eight sites and opened a design competition to all qualified Canadians. In 1922, flush with postwar pride, Ottawa threw caution to the wind and chose the boldest, most expensive proposal, from Toronto sculptor Walter Allward. But it was to be erected at Hill 60 in the Ypres salient, near the site of the 1916 Battle of Mount Sorrel. Vimy had its detractors: former commander Sir Arthur Currie opposed it on the grounds—rightly, as it turned out—that such a choice would confirm the popular impression “that Vimy was the greatest battle fought by the Canadians in France. In my mind, that is very far from being a fact.”

The person who made the difference in the war memorial choice, as he did in so much of the first half of the 20th century, was prime minister William Lyon Mackenzie King, who didn’t serve in the war and had never seen Vimy, but believed it was “hallowed ground” and the right site for “Canada’s altar on European soil.” He was surely cognizant of Vimy’s many advantages, as listed by Cook, one of which is that its name—almost alone among the tongue-tripping sites of Belgium and northeastern France—is “short, punchy and pronounceable” for anglophones.

The Vimy site itself is spectacular, its battle narrative brief and straightforward, its conclusion, unlike so many of the war’s stalemates, a clear-cut victory. Most important, though, was the unity element. “It probably didn’t mean a lot then,” says Cook, “that Vimy was the first time the corps, Canadians from across the country, fought together. But it does now.” And it did immediately after the war as well. For every proud historical account of Vimy, and of the larger war, as the making of Canada in its transition from colony to nation, there is another noting the war almost destroyed us. The December 1917 federal election campaign, fought over the issue of conscription, was bitter, virulently racist and pregnant with ramifications for national unity. It remains one of the most rancid moments in Canadian history. King wanted, and thought Canada needed, the unity narrative.

But if King loaded the gun, it was Allward, rerouted from Ypres, who hit the bull’s eye. He laboured 14 years, more than two of them clearing the site of unexploded bombs and human remains, and many more obsessing over sourcing the perfect stone. In 1936, long past the point his task became a torment to him, Allward finished the greatest monumental work of art ever created by a Canadian.

The same commanding heights that made Vimy Ridge such a military prize also made it a superb setting for his massive structure. From a long, low base—walls inscribed with the names of 11,285 Canadians who died in France and whose bodies were never recovered—rise two 30-m pylons, visible for 60 km over the northern French plain, with 20 giant figures symbolizing such concepts as “Canada mourning her fallen sons.”

MORE: Our Year Ahead issue looks at what 2017 will bring

Allward, according to Ottawa architect Julian Smith, had “three conceptual breakthroughs that make Vimy what it is: white stone when most monuments used grey, preserving the terrain, and the 11,000 names.” Many consider it the most beautiful of the combatant nations’ memorials. (Among its appreciative visitors was a triumphant Adolf Hitler, who came by on his lightning tour of conquered France in June 1940.)

As remarkable as the structure was what accompanied its unveiling: the pilgrimage, a term unselfconsciously applied to the arrival of 6,200 veterans and families, the largest peacetime movement of Canadians ever, from a nation that was still very Christian and inured to its wartime sacrifices—and devoted to its monarchy. “It was an Empire-wide event—the king was there,” stresses Cook, in reference to Edward VIII, still in his pre-Wallis Simpson glow of popularity, on his first foray abroad since the death of his father, George V. He came as king of Canada, flanked by scarlet-clad Mounties, to a piece of Canada ceded in perpetuity by the French government. When he walked down the slope to speak with veterans and their families, Edward was greeted, in the words of one vet, “by such a roar you never heard in war or peace.”

Then began the slow fade. Not even Allward’s achievement and its overwhelming acceptance by Great War veterans secured Vimy’s place in the national consciousness after the Second World War and the birth of a new Canada, far more skeptical about the cost of war and its institutions. “After Pearson and the peacekeeping ideal, we virtually wrote ourselves out of our wars,” says Cook. Vimy, designed for the opposite effect, began to fade from memory. But the pendulum swung again as the war generations passed and Canadians recognized how the Vimy memorial—like its sister structure in Ottawa—commemorates duty, service and sacrifice, not glory. And the peacekeeping mantle is increasingly frayed. “Ten years of fighting in Afghanistan has changed us,” Cook says.

MORE: Joseph Boyden goes to Vimy to reflect on its meaning

Now Vimy is indeed, as Diamond says, the locus, the place of entry into all wars in our history. So Canadians will come to Vimy in their thousands next April, many of them, in a nation of immigrants, with no family connection to what transpired a century ago, but just as much its heirs. They will be present for the opening of the new Vimy Education Centre, funded half by the Vimy Foundation and half by matching federal funds, and some will be funded by the same companies who, in the depths of the Great Depression, helped defray the travel costs of the original pilgrims. The Canadian War Museum will send, from its 14,000-piece collection of war art, depictions of the nearby French city of Arras, which saw its population decline during the war from 29,000 to 400 and lost all records of how it once looked.

And from Toronto will come the Vimy oaks. In 1917, 26-year-old Leslie Miller, looking around the blasted ridge for a souvenir, found a half-buried oak tree and gathered up a handful of acorns. Planted on farmland now within Toronto’s city limits, some of those 100-year-old oaks are going home to Vimy in the form of cuttings placed in the park next to Canada’s only overseas national historic site: “Living, repatriated memorials to the story of Vimy,” says Diamond.

Memory forges memory. In the wake of its own history, built up over a century, Vimy is now the cornerstone of Canadian war commemoration. Vimy did not make Canada, as some mythic accounts would have it; rather, Canada made Vimy. We chose it to be the symbolic centre, the best choice—given all the strands of a story that was not only about war—we could have made.