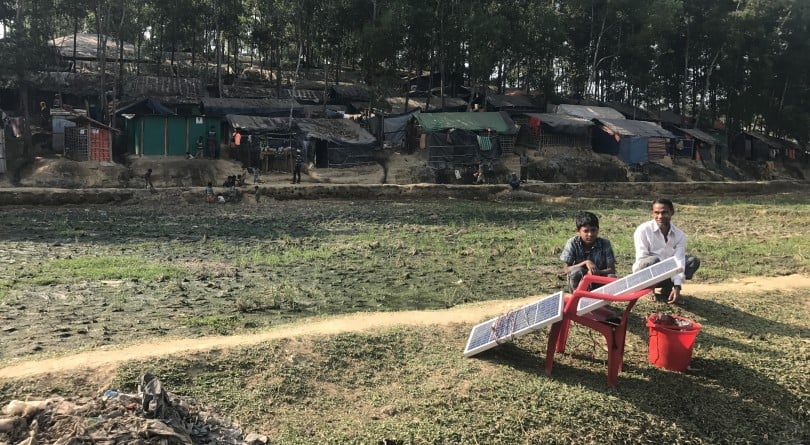 Ten-year-old Ajijur Rahman squats between paddy fields and an irrigation canal full of muck by Bangladesh’s Kutupalong Rohingya refugee camp. Beside him are two solar panels—one rests on the seat of a red plastic chair, while the other leans on the chair’s legs below it, wrapped in a cable leading to a battery in a bucket. Ajijur’s father, Mohammad Siddiq, soon joins him. The panels are their new prized possessions.

Around 700,000 Rohingya have fled to Bangladesh from Myanmar since August, when a brutal military campaign against their community broke out. In Bangladesh, solar panels are sought out among the refugees, as many used them to power their homes back in Myanmar. Siddiq was a part of that group, but unlike some others, wasn’t able to bring his solar equipment along when fleeing to Bangladesh.

“I couldn’t think about it because my first priority was to save my family,” he recalls.

But with no electricity in their Kutupalong hut, Siddiq grew intent on providing some for his family, saving as much money as possible to buy a solar kit in installments.

Siddiq’s home is on one of the few slopes in the camps where significant tree cover still exists. That could mean the soil around it may be strong enough to withstand potential landslides during the upcoming monsoon season. But in the short term, it also means the cluster of huts where Siddiq and his family lives doesn’t get much natural light, which is why he and Ajijur charge their panels down below under the midday sun.

When they’re done, they head through the fields along the narrowest of dirt paths, up the hill behind it to their home.

Inside, Siddiq sets up, placing the battery on his makeshift bed. He pulls the plastic bag around the battery down slightly and pulls the cable out, hooking it through the wooden slats of his sloping roof before attaching it to a light bulb he hangs above the bed. Siddiq fiddles with a switch he hasn’t yet connected to the light—a luxury for another day. For now he turns the bulb on manually. It brightens the room.

It’s a far cry from the situation the family found itself in last August when the violence broke out in their hometown of Maungdaw. As he looks back, Siddiq speaks of shootings and rocket launchers and says they hid in a stack of straw near a lake for three days before finding their way out of Myanmar. Just staying alive was the main priority.

But now that he’s more settled in Bangladesh, like many other refugees here, Siddiq has done the calculations. Though the solar equipment has cost him around 3000 Taka (approximately $50) he knows it’s more economical in the long run than his other options—candles and kerosene. It’s not easy for him to pool that much money together, but after months of being resourceful, he finds a way.

“I feel happy I bought the solar panels because now I can properly see what I am eating or doing at night,” he says.

But not everyone in the camps has the capital for solar, and the fact that the Rohingya are ineligible for employment in Bangladesh, makes it difficult to earn money. Abu Ahmed, who lives in the nearby Balukhali settlement, is visiting his friend Siddiq as he sets up the light.

“I feel horrible because in the past I used to have that in my home,” Ahmed says looking towards the bulb. “Nowadays I don’t.”

In the initial months of last year’s influx of refugees into Bangladesh, the priority of humanitarian workers was, understandably, not electricity, but shelter, water and food. Now, as aid organisations are better positioned to upgrade and improve their services and response, there’s more space to focus on issues like electricity. And though creating a grid to provide light to homes like Siddiq and Ahmed’s is not a feasible proposition, other measures are being taken.

UNHCR—the UN’s humanitarian organization—says it gives new arrivals in the camps solar powered lamps which also have power sockets, allowing them to be used as phone chargers as well. Agencies on the ground are also in the process of installing more than 6,000 solar powered lamps in the settlements, particularly in areas where there are toilets, to alleviate security concerns for women and girls. Solar lights have also been installed in some host community areas on the outskirts of the camps in schools and transit centres where refugees first arrive.

“Lighting makes a huge difference to people’s confidence. Particularly when you’re displaced, being in a camp with no lights at night is scary,” says Caroline Gluck, a senior public information officer for UNHCR.

“When you introduce light, suddenly it changes the atmosphere…People can then continue to study, they can socialize, they can have late night meals together and so on,” she says, pointing to studies conducted in other refugee areas around the world that have shown the difference electricity brings to everyday lives.

“It brings life back in the evenings.”