A 'Great Disaster' has just descended on Iraq

Adnan R. Khan reports from Kirkuk on the takeover of the city by Iraqi forces and how it has opened the door for a new insurgency 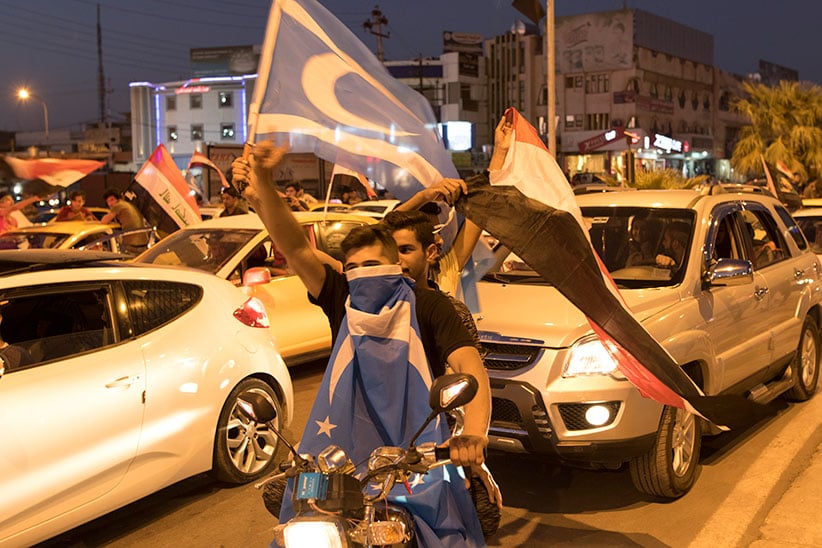 Kirkuk’s Turkmen celebrate the arrival of Iraqi forces in Kirkuk and the withdrawl of Kurdish Peshmerga. (Photograph by Adnan R. Khan)

It’s remarkable how quickly the tables have turned in northern Iraq. Less than a month ago, Iraqi Kurds voted in what was described as a landmark referendum on Kurdish independence. An estimated 3.3 million people turned out to vote in an atmosphere buzzing with excitement and hope for the future. The results were unequivocal: 92 per cent voted in favour of an independent Kurdistan.

But all was not as it seemed. While the voting in Kurdish-dominated cities like the capital Erbil and Suleimaniya played out with an almost festival flare, in ethnically divided cities like Kirkuk the mood was sombre. Voting stations in Arab and Turkmen neighbourhoods sat empty. The few journalists who ventured into those areas reported shops shuttered and people holed away in their homes, fearing what may come in the aftermath of a vote almost universally condemned by the international community.

After the referendum results were announced, Kurds danced in the streets while Iraqi leaders in Baghdad promised grave consequences.

On Oct. 13, the first signs of trouble began to emerge. After weeks of threats and counter-threats, troop movements and counter-movements, Iranian-backed Shia militias, the Hashd al-Shaabi, engaged in direct fighting with Kurdish Peshmerga forces in Tuz Khurmatu, a predominantly Turkmen town south of Kirkuk the Kurds had annexed during their fight against the so-called Islamic State and claimed for their future independent state.

Kurdish officials warned the Iraqis were preparing for a full assault on Kirkuk, a disputed oil-rich region claimed by the Kurds, and demanded the international community intervene to prevent all-out civil war.

READ MORE: A whole new war is about to hit Iraq

Then, in the early morning hours of Oct. 16, thousands of Iraqi troops, including special forces, the 9th armoured division, federal police and Hashd al-Shaabi, moved into Kirkuk. They met little resistance. Kurdish Peshmerga forces, famously known as “those who face death,” retreated with barely a shot fired.

The next day, it was the Arabs’ and Turkmens’ turn to dance in the streets. Thousands gathered in Kirkuk city’s main square to fete the incoming Iraqi forces with fireworks and celebratory gunfire. Meanwhile, Kurds retreated into the safety of their neighbourhoods, fearing the aftermath of what many were already calling “The Great Disaster”.

Kurdish leaders in Erbil, the capital of Iraq’s Kurdistan Region, promised grave consequences. But again, all was not as it seemed. Almost immediately after Iraqi forces entered the city, accusations and counter-accusations began to fly between Kurdistan’s two dominant political factions—the Kurdistan Democratic Party, or KDP, and the Patriotic Union of Kurdistan, or PUK.

KDP leaders accused the PUK of striking a secret deal with the Iraqis during the Tuz Khurmatu standoff which allowed the Hashd al-Shaabi to move on Kirkuk. PUK leaders blamed the KDP for forcing through a destabilizing referendum that served no purpose but to give their leader Masoud Barzani a political boost at a time when his support was waning.

Kurdish civilians found themselves caught in the middle. Thousands fled Kirkuk only to return the next day when it became clear Kirkuk had changed hands with barely a shot fired. On Tuesday, stunned and confused, many sat quietly in the streets, brooding with anger over what they considered a betrayal, not only by the international community, but by their own leadership.

“I don’t know who to blame for this,” Barzan Muhammad, a 22-year-old law student, told Maclean’s. “I feel sad. The Peshmerga fought ISIS so well. I was shocked when they left Kirkuk without firing a shot.”

Others pointed fingers directly at the KDP. A predominantly PUK-controlled city, Kirkuk’s Kurdish population was less enthusiastic about the referendum than their KDP counterparts. Most voted for independence but felt the process was heavily influenced by the KDP and in retrospect, should never have happened.

Their anger was palpable. In one Kurdish neighbourhood, an office belonging to the KDP’s intelligence service was set a light.

“The KDP themselves set the building on fire,” one man said, requesting anonymity. “There was a lot of sensitive information in there that they didn’t want the Iraqis to have.”

Others claimed the culprits were PUK supporters angry with Barzani.

Documents from the office strewn around the compound appeared to show records of people in Kirkuk, along with their photographs and personal details. Children rummaged through filing cabinets, piling their contents into a pit they said they would later burn, even as firefighters continued to battle the blaze. A large poster of Masoud Barzani, the Kurdistan president and leader of the KDP, lay discarded on the ground, his face torn and covered in dirt.

At the same time in Erbil, PUK and KDP politicians were scrambling to limit the damage done to their relationship. Frenzied meetings at the so-called White House, the PUK’s headquarters in the Kurdistan capital, however, had made little progress.

In the power plays that have characterized Kurdish politics for decades, the PUK now stands to regain some of the prestige it has lost at the expense of Barzani family in the years leading up to the referendum. According to Sardar Herzi, a former PUK member of parliament and now a legal advisor to the party leadership, the referendum may have been “the worst decision in our history,” but at the same time, it has given the PUK a new lease on life.

“It was on the insistence of Masoud Barzani that the referendum was held,” he told Maclean’s. “Nobody knows what he expected. I always believed he would delay it. How he decided to go ahead, what he was thinking, only one person can answer that question: Mr. Masoud Barzani. It was not a wise decision. We lost all our international support. And we united our enemies.”

The deal between the PUK and the Iraqis, Herzi adds, was a direct consequence of Barzani’s insistence on holding the referendum. The Iraqi forces’ move on Kirkuk was pre-arranged, he said, with the tacit approval of the international coalition, including Canada, with three caveats: the operations would only target territories occupied by the Kurds since 2014, Hashd al-Shaabi forces would not enter populated areas, and civilians would be spared. If those conditions were met, the PUK would not put up any resistance.

Hashd al-Shaabi fighters told Maclean’s that the PUK was not involved in any of the skirmishes they faced. “We had no problems with them,” Ali Ahmed, posted on the road leading into Kirkuk city from the Kurdistan Region, said.

Not all of the caveats, however, have been honoured. Hashd al-Shaabi forces were visible during the celebrations in Kirkuk’s main square and a local Shia Turkmen faction has set up a base in the city centre, even as the Iraqi government announced today that all militias had been ordered to leave.

General Jawdat Assaf, the head of media relations for a Shia Turkmen faction of the Hashd al-Shaabi, insisted that his forces never entered Kirkuk.

“Some of them may have come in to participate in the celebrations, but they were not in the city for any security duties,” he said. “The Iraqi army and federal police are in charge of Kirkuk now.”

The presence of the Hashd al-Shaabi poses a grave threat to Kirkuk’s stability. The group’s close ties to Iran (Assaf admitted Iranian “advisors” were on the ground with his forces) raise concerns over the potential for a sectarian flare up in the city, a situation the embattled Islamic State could exploit, as they did in Baghdad in the mid-2000s when they were known as al-Qaeda in Iraq. Kurdish volunteer forces, including the Kurdistan Workers Party, or PKK, a designated terrorist organization that has fought a low-level insurgency in Turkey for decades, has also been spotted in Kirkuk.

The potential for the city to now become the epicentre of a renewed insurgency in Iraq is frighteningly real. In a single stroke, the Kurdish independence referendum has not only erased the fragile unity Iraq’s Kurdistan Region had begun to enjoy and wiped out the political gains Kurds have made, but has handed ISIS a new reason d’etre and Iran a deeper stranglehold on Iraqi politics. A Great Disaster has hit the Kurds, but its ripple effects will be felt throughout Iraq for the foreseeable future.