A hard won and fragile victory in Ukraine

Security has melted away, leaving the scarred centre of Kyiv in the hands of protesters and ordinary people 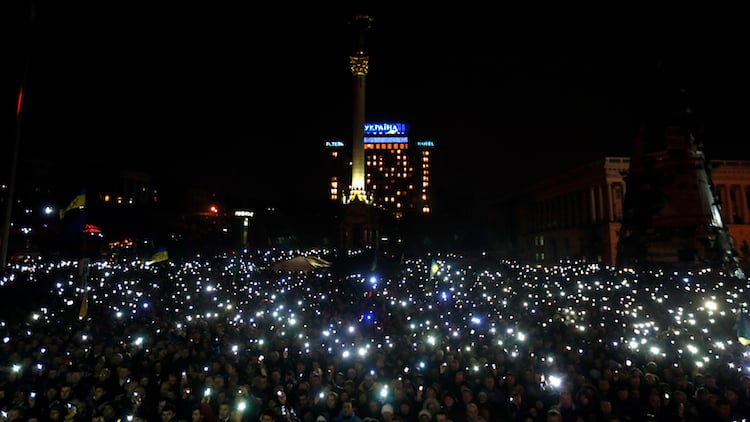 Even long time activists, who have seen their stately capital Kyiv rapidly cross-hatched with barricades and lines of burning tires, are stunned by the changes that have transformed the city over the past 48 hours.

Gone—almost—is the tension. There are grim reminders everywhere of battles just ended and the deaths of close to 100 demonstrators: blood still visible amid the debris of fortifications; cases of Molotov cocktails; the pervasive smell of soot.

But the police and security forces have simply melted away, leaving the scarred centre of Kyiv entirely in the hands of protesters and ordinary people.

Remarkably, there is no triumphal violence and looting, or even disorder. Traffic flow is maintained by volunteers, as is security in and out of major public spaces. Medical care, along with food and drink, is provided free of charge. Volunteers sweep garbage from highway curbs. It feels as though the regular political hierarchy has been replaced by a collective revolutionary one. Drivers at intersections obey young men wearing haphazard uniforms and helmets not because they are afraid of them, but because they believe in them, and want this experiment in self-government to work.

Yanukovych rejected this. But what he thinks doesn’t really matter anymore—at least in Kyiv. His power has evaporated. This morning, protesters stormed his private residence and gaped in amazement and disgust at the plush spa, fake lake and private zoo. He has fled Kyiv and is now reportedly somewhere in eastern Ukraine.

Parliament also voted to release imprisoned opposition leader Yulia Tymoshenko, jailed since 2011 on charges many in the opposition believe were politically motivated. She immediately came to Kyiv and Maidan. Before she arrived tens of thousands gathered to sing, hear speeches and hold a vigil for a young man killed in recent fighting. His body was carried through the crowd to the stage. The atmosphere was more sad than angry. Someone on stage who knew him said he was a good man, a good father. Those watching chanted “glory!” and “heroes never die!”

Then Yulia Tymoshenko was there. She sat in a wheelchair, her blonde hair tied in its trademark braid, hunched forward and looking a little weak—until her voice thundered over the square. She praised the dead and said she had dreamed about this moment in prison. She called the barricades where so many died sacred ground. She talked about a new Ukraine, built by new politicians who will never be allowed to forget the power people have to hold them to account.

Tymoshenko is not universally popular in Ukraine, and it’s possible that some people cheered for the revolution more than for her. But her speech still felt like something of a climax, perhaps the closest thing to a celebration Ukrainians will be allowed to have.

A hard and uncertain path lies ahead. We don’t know how eastern Ukraine will react. One man from that region—an opposition supporter—said his pro-government father back home told him people there feel they have lost a civil war. Ukraine remains a financial mess. It will not be easy to govern and we can’t predict how Russia, a big backer or Yanukovych, will respond either. But quiet acceptance seems unlikely.

I’m writing this well past 1 o’clock in the morning local time, but still the sounds of speeches, chants and hymns flood from the square through my nearby room. Ukrainians in Maidan don’t want the night to end.