A Modi miracle in India

India’s prime minister plans to turn his country into the world’s third-biggest economy. It just might work. 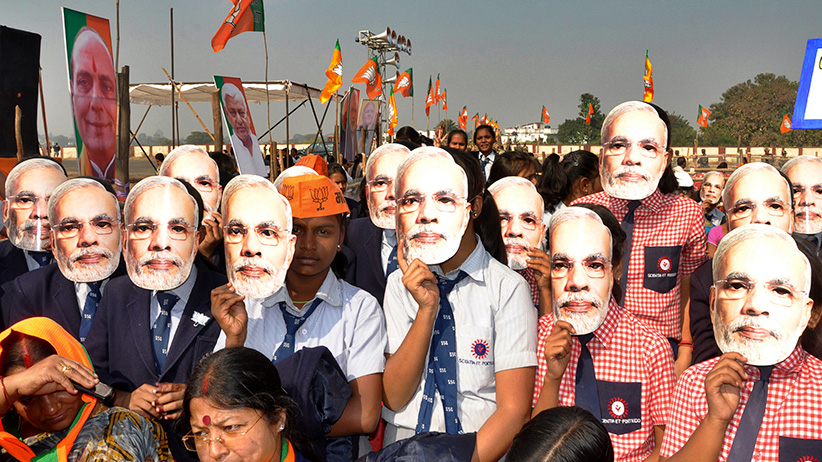 That is just a sampling from the last week of March. The world’s richest and most powerful people are descending on India as on no other place on the planet. They started coming after Narendra Modi became prime minister 11 months ago and they haven’t stopped. “It’s like the gold rush in the United States,” says Naiyya Saggi, a Harvard-trained entrepreneur who has raised US$350,000 to fund Baby Chakra, a website specializing in advice for mothers. “It’s like that now in India.”

Turning points are only visible with hindsight. But the sight of international investors lining up for an audience with Modi is evidence of a shift in a country that is notoriously hostile to foreign investors. India—the world’s second-most populous country—could be in the early stages of an economic renaissance that will rival China’s over the past couple of decades. Such an outcome would provide the global economy with a new engine at a time when others are sputtering. Hundreds of millions of people would be lifted from poverty.

India has caught some breaks. A net importer of energy, the country is benefiting enormously from the collapse of oil prices. That has allowed the government to remove a ceiling on the cost of diesel fuel without generating a public outcry, a move economists said was necessary to encourage oil companies to invest in domestic production. But the biggest change is psychological. Modi’s election has created the impression that India is finally serious about doing business. “What has changed is a sense that the business environment will be more conducive to domestic and international capital,” says Mark Machin, the head of international investments at the Canada Pension Plan Investment Board, which manages assets worth about $240 billion.

One makes predictions about India’s future carefully. Bursts of enthusiasm in the early ’90s and the middle part of the 2000s fizzled. Each time, the government failed to fully implement the types of free-market policies that led to decades of sustained and rapid economic growth in Japan, South Korea and China. But Modi won a majority last year by promising to take the path similar to that of India’s wealthier neighbours. The early evidence suggests he was serious.

Machin, who is based in Hong Kong, has been an investment banker in Asia since 1994. He’s witnessed the ups and downs, and is willing to concede that this time could be different. “Things are getting done pretty quickly, relative to previous periods,” he says. The country’s annual economic growth rate will accelerate to 7.8 per cent, passing China as the world’s fastest-growing major economy, according to the Asian Development Bank. And Modi has no intention of stopping there. He is intent on creating the world’s third-biggest economy, a place currently occupied by Japan. That will require some work. India’s GDP currently is about $2 trillion—good for No. 9. Japan’s economy is more than twice that size.

But the gap between India and Japan is precisely why the world’s investors are so excited. They see an opportunity to get in on the ground floor of a transformation that will make the first movers incredibly rich. The country needs everything: roads, bridges, metro lines, airports, hospitals, housing and cellular transmission towers. There is also what Indian officials like to call the country’s “demographic dividend.” The median age of the population is 25. Some 13 million Indians will enter the workforce each year until 2030. Women are only now starting to seek employment outside the home in significant numbers. India’s retail market is expected to double to US$1 trillion by 2020, according to Boston Consulting Group, and average annual household income will triple, to US$18,488.

“It’s not an ‘if’ market, it’s a ‘when’ market,” says Matthew Emerman, chief financial officer at New York-based Saavn, a digital music service that specializes in songs in Hindi, Tamil and 10 other languages spoken in India. “It is the most aspirational place in the world. People in India want what the rest of the world has.”

Modi is taking full advantage of all the attention being lavished on him and his country. He is going around the world making sure everyone knows that India is open for business. Last September, he filled Madison Square Garden. Sixteen thousand people crowded into Allphones Arena in Sydney to hear Modi speak in November. Later this month, Modi will pull Canada into his orbit, with stops planned in Ottawa, Toronto and Vancouver after a swing through Germany and France. “We welcome him as a rock star,” Nadir Patel, Canada’s high commissioner in New Delhi, told the Business Standard newspaper in March.

The hype is important, because cynicism about India runs deep. “Indian reformers become experts at creating a feel-good atmosphere without doing all that much,” Mihir Sharma, a New Delhi-based economist and journalist, writes in his 2015 book Restart: The Last Chance for the Indian Economy. India placed 142nd in the World Bank’s latest ranking of the easiest countries in which to do business, one spot ahead of the West Bank and Gaza. Entrepreneurs in India complain about having to wait two months simply to register a company. The country’s state-owned lenders are heavily indebted, in part, because they are obliged to support the sick companies of crony capitalists, according to Raghuram Rajan, the central bank governor. Exports plunged 15 per cent in February from a year earlier—an ugly number for a prime minister who talks of turning his country into a manufacturing hub.

Modi promises to change all of this. He says he will lift India to 50th on the list of easiest places to do business. The latest budget set aside money for infrastructure, pledged to cut the corporate income tax rate and restated the government’s desire to unite the country’s disparate states under one goods and services tax. Modi has also won praise for selling coal rights via auction and for pushing through Parliament a bill that raised foreign-ownership limits in insurance companies to 49 per cent. But it remains true that planned reforms outnumber implemented ones. “We don’t see the changes happening,” says Chaitanya Mehta, a 30-year-old business graduate who is developing a mobile-phone application that links doctors and patients. “The change will be excruciatingly slow.”

Ford’s chief executive was in India last month to mark the opening of a new assembly plant in the state of Gujarat that will employ 2,500 people. Modi will need hundreds more announcements like that to keep India’s favourable demographics from becoming a nightmare. Tens of millions of unemployed young people would be more trouble than any country could bear.
But some of those kids also are Modi’s secret weapons. On the 18th floor of the Bombay Stock Exchange’s (BSE) headquarters in south Mumbai, a few dozen thirtysomethings are taking their futures into their own hands. Mehta and Baby Chakra’s Saggi are members of Zone Startups, a new-business incubator that is a joint project of the BSE and Toronto’s Ryerson University. There are lots of these scattered around India, and that’s the main reason this moment in India’s economic evolution is different. “There is a new generation of people,” says Ambarish Datta, the BSE official who helped to develop the Zone project. “In my time, you never would have dreamed of becoming an entrepreneur.”

Sharma says India will need more factories if it is to replicate China’s growth. He also says India needs stories of the kind the U.S. tells itself, tales of great risk and great reward. It’s starting to create those stories. The young entrepreneurs at Zone are inspired by local heroes such as Flipkart, an e-commerce site that is valued at about US$15 billion, and Ola, a taxi-booking service in a war for market share with Uber. Saggi was asked what role she thought India’s new wave of entrepreneurs will play in the country’s future. “I think it will be massive,” she says.