A nation of sick presidents 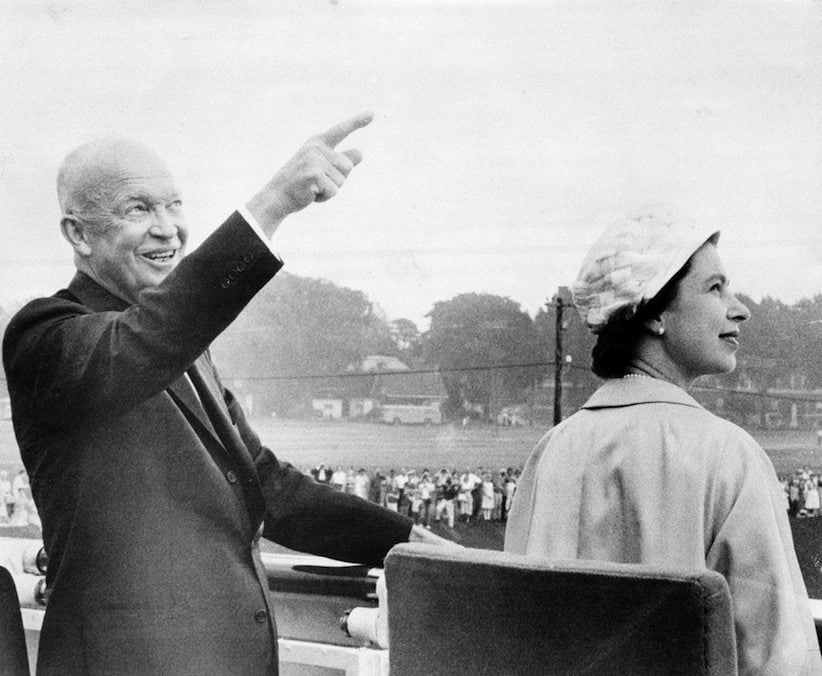 U.S. President Dwight Eisenhower gestures June 26,1959 as he points out features of the St. Lawrence Seaway to England’s Queen Elizabeth II . The two heads of state were sailing along the seaway aboard the royal yacht Britannia, following ceremonies marking the official opening of the vital waterway. (AP Photo)

With the race for the White House metastasizing into what tens of millions of American voters see as a derisible choice between a pneumoniac and a maniac, a history of presidential infirmities shows that, should she recover from her current illness and gain election in November, Hillary Clinton will not be the first U.S. chief executive to steer the ship of state in less than perfect fettle.

On Sunday morning in New York City, Clinton, who will turn 69 next month, was seen to crumple at a curbside after leaving a public ceremony on the 15th anniversary of the 9/11 attacks. It was more than one hour before her paranoiac retinue admitted that she had become “overheated and dehydrated,” and it was nearly nightfall by the time the Democratic candidate’s personal physician revealed an even more calamitous diagnosis: pneumonia.

But hours later, at a rally in Baltimore, Trump resumed his attacks on Clinton’s labelling of 50 per cent of his supporters as “a basket of deplorables.” “The disdain that Hillary Clinton expressed toward millions of decent Americans disqualifies her from public service!” Trump bellowed, affirming his confidence that, after a brief recuperation, the former secretary of state will rise from her cot in tony Chappaqua, N.Y.  and jump back into the race in time for their first debate on Sept. 26. Words, not germs, will decide the contest, Trump avers.

So do most medical experts and academics, among them Robert E. Gilbert, professor emeritus of political science at Northeastern University in Boston and a renowned scholar of presidential infirmity, debility and demise.

“My first thought is that I am surprised that this has generated so much tension, because pneumonia is not the kind of illness that I would describe as devastating news,” Gilbert told Maclean’s. “Pneumonia used to be a very, very serious illness that led to death. But today, I can’t imagine anyone leaving a ticket because of pneumonia.”

(Among the presidents whose deaths were ascribed to pneumonia were William Henry Harrison, who perished after only one month in office in 1841, and his grandson Benjamin.)

“When we talk of presidential ill health, I think of Dwight Eisenhower’s heart attack, which was massive,” Gilbert says. “I think of Ronald Reagan being shot and almost killed by an assassin. Pneumonia pales in comparison to Lyndon Johnson’s gall bladder surgery and things like that. I think the American people have no idea how many presidents have been ill.”

It was September 1955, when Eisenhower, the former Allied military commander and a four-pack-a-day cigarette smoker, complained in the night of chest pains after completing a round of golf in Colorado and after having consumed his usual daily hogshead of meat. (Ike blamed his anterior myocardial infarction on the raw onions that topped the burger he ate for lunch. The president’s breakfast that day had consisted of sausage, bacon, mush and hotcakes; his dinner was roast lamb.)

Placed in an oxygen tent—in red pajamas with five gold stars on the collar—but otherwise barely medicated, Eisenhower was asked by his chief of staff how much information, if any, to release to the public. “Tell them everything,” Ike replied, quite un-Hillary-like.

The definition of “everything” grew in the ensuing days to include the frequency of the president’s bowel movements, ushering in a new era of medical confessionals. Although he did not return to Washington until November, when he finally was fit enough to walk up an airplane’s steps—and although he also was diagnosed with Crohn’s disease plus a coronary aneurism that could have burst, fatally, at any instant—Eisenhower won re-election in 1956 and outlived Adlai Stevenson, the Democrat who ran against him.

(In retirement, Ike still was being urged by his doctors to follow a less carnivorous diet. Asked by one physician whether he had consumed a healthful supper, Ike replied, “Yes. Pig’s knuckles and sauerkraut.”)

In the 20th century alone, presidential ailments ranged from John F. Kennedy’s excruciating back woes to George H. W. Bush’s infamous episode of vomiting onto Prime Minister Miyazawa Kiichi of Japan. Woodrow Wilson suffered a paralyzing stroke in 1919, more than a year before the end of his second term. (For months, the public was told almost nothing.)

In the 1970s, Gerald Ford, a former gridiron star at Michigan, was widely mocked for his frequent stumbles. (Johnson once claimed that Ford had “played too much football without a helmet.”)

In contrast, George W. Bush, the early-to-bedder and expert mountain biker, was categorized as being in the top tier of (physical) fitness for 60-year-old men with a body-fat ratio of only 14 per cent. Barack Obama has not been reported to have fallen ill at all during his entire presidency. He boasts a resting pulse rate of 56 and blood pressure of 110/68, two exemplary statistics perhaps attributable to the unlikelihood of the current President’s wife, Michelle, ever allowing him to consume a repast of sausage, bacon and mush.

But Obama was only 47 years old when he was elected and his successor either will be 69 (Clinton) or 70 (Trump) when the votes are counted eight weeks hence. The threat of imminent tragedy is the price that a fractured nation may pay for designating such antiquated contenders. (Trump’s running mate, Indiana Gov. Mike Pence, is 57. Sen. Tim Kaine of Virginia, Clinton’s choice for VP, is 58.)

Mogul Trump, meanwhile, has promised to release his own vital statistics “very, very soon”—perhaps during an appearance on the Dr. Oz Show next week. The billionaire earlier produced a letter from a doctor that declared him “the healthiest individual ever elected to the presidency,” and often has bragged of sleeping only five hours a night, his shut-eye coming only when not engaged in what his wife Melania once described as “the best sex I ever had.”

But even this rampant virility may not be enough to soothe a worried electorate.

“George Washington had cancer,” says Gilbert. “Right from the beginning, almost every president was ill, and very often the illnesses were concealed. It’s not surprising  that Hillary Clinton and Donald Trump don’t want to announce if they are sick. Illness weakens a presidency. It discombobulates the nation when they are ill.”