Hungary: A new threat to the EU 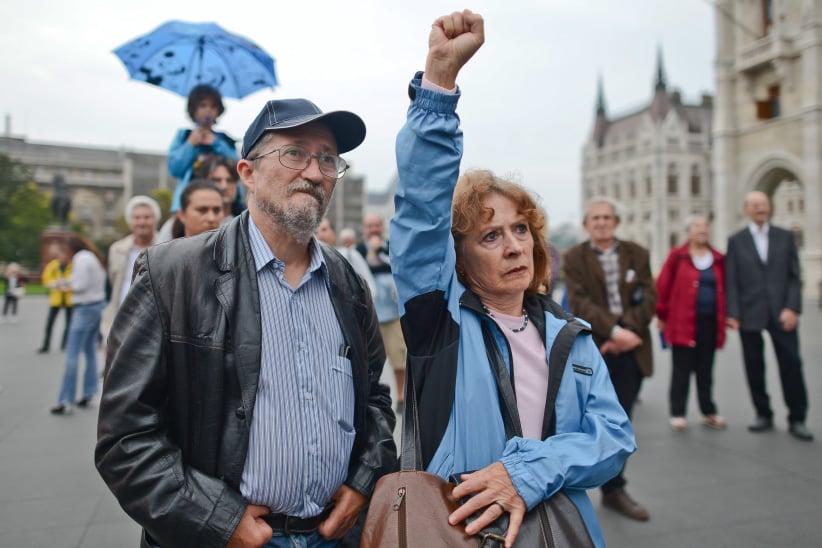 It is not altogether surprising that Hungarians are concerned about their survival as a nation. It’s a small country with its own language and unique history that it fears could disappear altogether. They have had a lot of unpleasant experiences with being ruled from the outside–by the Turks, the Austrians, the Germans, the Russians–and they have never liked it. Every child learns of the 150-plus years of the spectacularly cruel Ottomans, and people still talk of the 1919 Treaty of Trianon that dismembered the country and distributed two thirds of it among its neighbours. The idea of multiculturalism is anathema to the average person here.

Yet the government of Prime Minister Viktor Orban felt it was necessary to aggressively remind Hungarians that they should not accept the European Union’s mandatory migrant quota of 1,294 asylum seekers or, as they are called in Hungary, migrants. The referendum on the issue ended on Oct. 2, but around Budapest it is still hard to ignore the gigantic red, white and green billboards warning Hungarians to vote No to the EU’s migrant quota.

The campaign promoted the government’s belief that any quota is an invasion of the country’s sovereignty. The referendum, though it had not reached the more than 50 per cent turnout mandated by the Hungarian constitution, did, indeed, prove that more than 3.3 million people, or 98 per cent of those who voted, are opposed to the EU’s plan.

The government’s tireless and absurdly expensive campaign (at a cost of about $40 million) included a range of advertisements designed to terrify. They offered statistics about rape and sexual harassment. Ads prefaced by “Did you know?” informed the unwary that there had been more than 300 terror attacks in Europe; that the Paris attacks had been committed by “immigrants”; that more than 1.5 million “illegal immigrants” had arrived in Europe in 2015, and so on.

The only viable opposition to the government’s campaign was the “two-tailed dog campaign,” posing idiotic questions, such as, “Did you know that the average Hungarian is more likely to see a UFO than a refugee?” At least that campaign attests to Hungarians’ sense of humour.

It is not likely that asylum seekers, if they had a choice, would choose to live in Hungary. After German Chancellor Angela Merkel issued her open invitation, even before the infamous fences, about 400,000 people arrived at Hungary’s borders, all clamouring to go on to Germany.

So why did the government spend so lavishly on this campaign? In an interview with Maclean’s, Jenő Megyesy, senior adviser to Prime Minister Orban, said a country must decide for itself what kind of society it wants. It is, ultimately, an existential question. As well, Hungary takes its EU responsibilities seriously. EU law says that countries where migrants enter the union are responsible for registering entrants. “There is a legal process. Yet most migrants refused to be fingerprinted, offered no ID and only a small percentage were refugees in the legal sense,” said Megyesy. Of the 17,500 processed in 2016 at Hungary’s part of the EU border this year, only 4,500 were Syrians. Most of the rest were economic migrants.

Hungarians love political and philosophical arguments, but earlier this month the discussions had passed the passionate stage and were, even in the hands of the most empowered, descending into anger. When Orban spoke of “illiberal” democracy, he was using a local code-word meaning not-international-financial-cosmopolitan. When he talks of a “Christian Europe,” he means not-Muslim. The love of a country and its traditions versus negation of the nation state. It’s patriotism, writ large and without apologies.

In a July 2014 speech in Romania, Orban talked of new political systems “that are not Western, not liberal, not liberal democracies, maybe not even democracies, and yet making nations successful.” He mentioned the “stars” of this new thinking: Singapore, China, India, Turkey and Russia. These are the countries that would likely “sustain their world-competitiveness.” Liberal democracies “question even the existence of national interests.” In Hungary, national interests, as Orban sees them, trump EU interests.

When he called on Hungarians to reject the EU’s quota, he knew he was challenging Angela Merkel and the European Union. He also knows that several European leaders and intellectuals are sympathetic to his views and see his stance on the borders as heroic.

When British philosopher Roger Scruton visited Budapest in September, he referred to Brexit’s success in the U.K. as a protest. “People have had enough,” he told Heti Valasz, the Hungarian weekly magazine. “They felt that the country was no longer theirs.” He praised Orban for withstanding the pressure from Brussels and talked of the great European traditions that are inimical to Islam. The integration of Muslims, he said, has not been successful and would not become successful now.

It’s natural to wonder where the opposition has been while Orban’s party, FIDESZ, worked on its “illiberal” ideology. The political left has been busy battling itself. Former socialist prime minister Ferenc Gyurcsány has been widely discredited and it is believed he cannot provide leadership. Jobbik, on the far right, has largely agreed with the government’s policies, though even it has had doubts about how government funds have been awarded. For example, one of the beneficiaries of the recent ad campaigns are Andy Vajna’s media companies. The former Hollywood movie-maker has not only become the local film czar deciding which films get government support, he is also the sole owner of several casinos. It is not unusual for a government to reward its supporters, but it is unusual that the rewards should create multi-millionaires.

Liberal politician and sociologist Balint Magyar’s book The Post-Communist Mafia State (The Case of Hungary) sets out the conditions for the creation of a state that hangs on the will of one man and shows how, having achieved a two-thirds majority in parliament, FIDESZ has removed the institutional obstacles to wealth creation for its insiders, including, of course, the prime minister himself. The book was a bestseller in Hungary, Magyar told me. Here, the existence of millionaires with party affiliations surprises no one.

What did come as a surprise was the sudden disappearance, a week ago, of the daily newspaper Nepszabadsag. Originally a mainstay of Hungarian socialism, the newspaper had become an independent voice is a sea of state-controlled media. Its daily reports on corruption had kept a not unreasonable circulation going, though much reduced from its heyday. Its owner, Austria’s Mediaworks, suspended publication, closed the website, and shut out its employees. It claimed unsustainable business losses but, as even the conservative Heti Valasz noted, the paper seemed to have turned around financially and no effort had been made to sell it.

It’s difficult not to see political interference in its abrupt demise.

Since the referendum, Orban has determined that the government would again, for the seventh time, change its constitution to dispense with the need for a referendum to act in the interests of “the people’s will.” Thus, although the referendum was legally not valid, it was a major political success.

In his Oct. 7 speech in Bratislava, Orban promised “legal and constitutional” changes in order “for the Hungarian parliament alone to have the authority to decide with whom we live together …We must lay down that no one can impose any kind of resettlement quota on the Hungarian people.”

To make sure that everyone understood what he meant, he announced that, “We do not want criminals, and neither do we want acts of terrorism.”

On the way to the airport outside of Budapest, new signs have joined the old ones: “We have sent a message to Brussels: 98% say NO to forced immigration.”