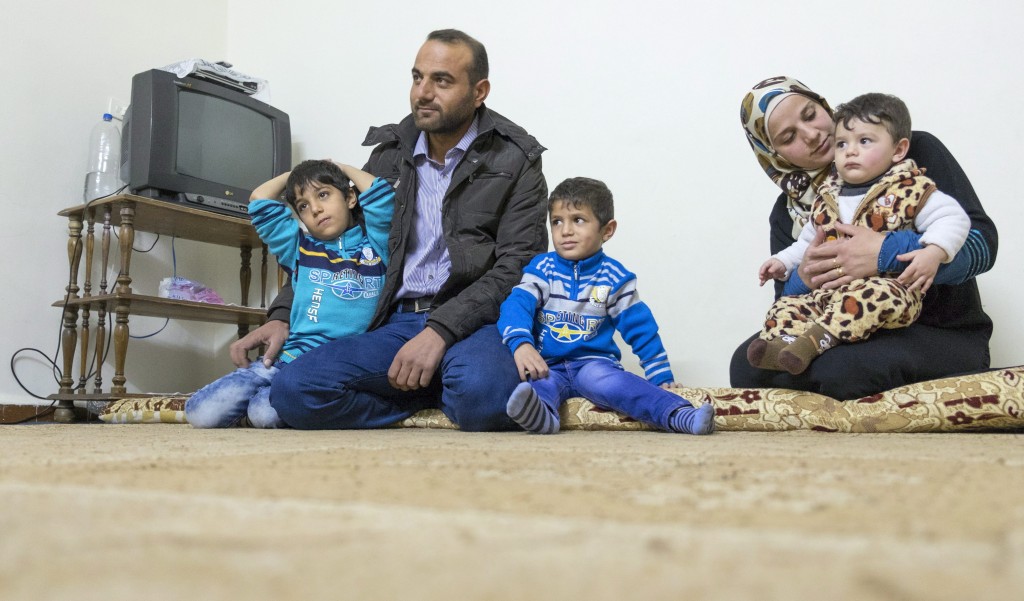 Mjdi Mnaahe, his wife Wessam and their sons Tamim, 6, Saif, 4 and Mohammad, 1, (left to right) sit in their apartment Monday, November 30, 2015 in Irbid, Jordan. The Syrian refugee family is waiting for approval to immigrate to Canada. (Paul Chiasson/CP)

IRBID, Jordan – Mohammad Mnaahe, only a year old and not yet walking, crawls across the beige carpets in his family’s rented apartment about 30 kilometres from the Jordanian border with Syria.

As his brother Tamim sleeps on a yellow and red mattress on the floor and another brother, Saif, is tucked in next to his father, Mohammad plays with a laminated plastic certificate, oblivious to the value it holds for his family.

His parents, however, keep a close eye on it. To them, it represents their best hope of getting out of Jordan and to Canada — proof from the United Nations of their official status as refugees of the Syrian war.

Mohammad’s father, Mjdi, has been watching for months as thousands of his fellow former countrymen have fled Jordan and other countries in search of better lives.

“They are risking their lives through the sea to reach Europe,” he says. “But I get my chance from a phone call.”

The Mnaahe family have been in the UN database since the winter of 2013, when Mjdi, now 32, sent his wife and their two older sons away from their home village in the province of Daar’a because fighting between the Syrian regime and opposition forces was intensifying.

He’d meant to join them as soon as they were settled in Irbid, a town among those hosting some of the estimated 680,000 Syrian refugees in Jordan.

But a few weeks after they left, there was very heavy shelling and a building nearby was hit, covering him in shrapnel and soot.

He left the village the very next day, taking a car to the Jordanian border, where he was detained overnight — possibly for no other reason than the border guard didn’t like his beard, he says.

He’s since shaved it off, one of many changes his family’s been through since they’ve become refugees — including the arrival of their third son.

But gone is his job as a private taxi driver because in Jordan he can’t get a driver’s license. Also gone are most of his family’s possessions as they left with little more than their clothes. Their apartment is sparse; carpets from the UN’s refugee agency comprise part of the furniture.

When they arrived, he says, they were given some advice from neighbours who’d been in Jordan as refugees for years: buy new things. He said no, there was no point. They were just going to be there a few months and had no money, so they bought a few used items.

Two years later and they still have very little money, and now-broken belongings they can’t afford to fix.

When word begin to spread through Syrian refugees in this town that Canada was going to be taking in many thousands — and quickly — he says something told him he might be among them.

And then, two weeks ago, the call came. Would they be interested in moving to Canada, the UN asked him, possibly as early as the end of the year?

He said yes, and last week, was among 900 people called to the UN’s office building in Amman to have his file reviewed for possible submission to the Canadian government program.

He was there eight hours, he says — case number 698 — and after two 15-minute interviews, was told to await another call.

That one came too — on Dec. 10, his entire family will go to the new Canadian processing centre at a Jordanian military exhibition facility to fill out more paperwork, have their fingerprints and other biometric information taken, be interviewed by Canadian officials, and get a medical check or an appointment for a future one.

Canada is now actively reviewing thousands of cases being handed over from the UN to select 15,000 Syrian refugees whose settlement and other costs will be directly absorbed by taxpayers.

A further 10,000 will be admitted via the private sponsorship system, the full 25,000 expected to be in Canada by the end of February.

She’s asked how she feels about a move to Canada. What her husband says is best for them is what she thinks is best, she says. Having the boys learn English and grow up with a better education — “it will be good.”

Mnaahe says if his family isn’t accepted to Canada, they’ll have to find another option, maybe having him move to one of the Gulf states to work as a labourer, whereupon he would send money home.

But if it does work out, he’s ready to leave as soon as possible. There’s nothing to pack, no one to whom he needs to say goodbye.