A promise to Jo Cox: 'This doesn't end here'

Friends, family, co-workers and strangers vow to pick up British lawmaker's fight for more civility and grace in politics 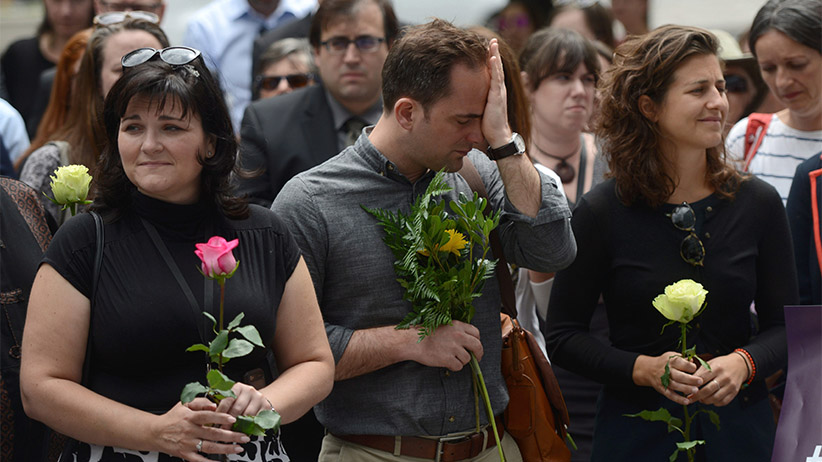 People take part in an event titled “More In Common: A Worldwide Celebration of Jo Cox” at the British High Commission in Ottawa on June 22. (Sean Kilpatrick/CP)

There are two things that people at Wednesday’s memorial in Ottawa for Jo Cox mentioned about her, unprompted. One is that Cox was incredibly tiny and looked a dozen years younger than her true age. The other is that they fully expected that this pocket-sized crusader for a better world would be the prime minister of Britain one day.

Instead, the rookie MP was shot and stabbed to death in her working-class northern constituency in Yorkshire on Thursday. After a decade in leadership roles with Oxfam, as a rising star in the Labour party, Cox had become an impassioned defender of refugees and staunch campaigner on the “stay” side of the Brexit referendum. Police charged 52-year-old Thomas Mair with her murder, and they are investigating his possible ties to neo-Nazi groups.

Wednesday would have been Cox’s 42nd birthday, and so around the globe—in Brussels, New York, Sarajevo, Beirut and many other cities—far-flung colleagues, friends and strangers gathered to grieve her death and denounce the hatred and divisiveness that led to it. Cox’s husband, Brendan, a charities consultant, called his wife’s murder “an act of terror” before a crowd of thousands in London. “What a beautiful irony it is that an act designed to advance hatred has instead generated such an outpouring of love,” he said, accompanied by their five-year-old son, Cuillin, and three-year-old daughter, Lejla. “Jo lived for her beliefs and on Thursday she died for them, and for the rest of our lives we will fight for them in her name.”

At the same moment, on the steps of the British High Commission in Ottawa, Oxfam Canada staffers—only a few had actually met Cox, but all felt a kinship—propped up banners emblazoned with #LoveLikeJo and #MoreInCommon; the latter hashtag was drawn from her preternaturally eloquent and assured first speech in the British Parliament after she was elected in May 2015. As a crowd of about 60 people gathered on the sidewalk, the mood was exactly like that of a funeral home—warm hugs, sad eyes and hushed voices. Ailish Campbell, a general director at Finance Canada who met Cox and her husband through the World Economic Forum, wove through of the crowd handing out a colourful array of flowers.

When it was Campbell’s turn to speak, she read out the statement Brendan Cox issued immediately following his wife’s murder. As Campbell repeated the words of a grieving husband—she’d scrawled them in marker on a few pieces of construction paper—she tilted her chin to keep the tears from spilling over. Her voice failed her when she arrived at the last line: “Jo would have no regrets about her life, she lived every day of it to the full.”

The mourners in the crowd and speakers on the steps painted the portrait of a relentless crusader for what she believed was right. But the Cox they knew was no starry-eyed idealist. She was, rather, a shrewd pragmatist and nimble brain who could master complex files and get things done on the ground—if not through sheer charm than raw force of will. There’s the cliché of a force of nature, but here, you really get the feeling that Jo Cox generated her own weather systems.

When Lina Holguin, policy and campaign director for Oxfam Quebec, pictures Cox in the Oxfam UK office where they worked, she imagines the human incarnation of popcorn kernels—all crackling enthusiasm and restless energy to get things done.

Holguin is diminutive and youthful-looking, too, and she knows too well the roadblocks those traits can create when you’re meeting politicians and dignitaries who dismiss you on sight. Cox would head into meetings like these, and time and again, she would send out a dispatch to her colleagues later, saying things went so well and they were getting results. “She truly believed we could change the world. And she was stubborn as well—she would not lay back in her battles,” Holguin says. “She did it in a way that was so clever, but with so much kindness—and always with a smile on her face.”

MORE: Tributes to Jo Cox: ‘The heart and soul of these benches’

In 2006, when Holguin went to work at Oxfam in the UK, Cox invited her to live with her in Oxford; she stayed for a year and a half. That was around the time Cox began dating Brendan. Holguin remembers asking Cox what it was that she liked about the man who would become her husband. “He challenges me!” Cox told her. Holguin holds one hand out, way up high, to demonstrate the level someone had to play at to keep pace with her friend. “I would look at her and think, ‘There goes Jo. She will be the prime minister of the UK at one point in her life,'” Holguin says. “She wanted to be in power to be able to change the world, and she would have been fantastic at it.”

Holguin emphasized the same thought everyone else at the memorial articulated, and the same idea Brendan Cox has repeated several times since his wife was murdered: this doesn’t end here. They have all said they will pick up where she left off, they will keep moving in the same direction she relentlessly did, and they will fight for more civility and grace, less toxic hatred in the political arena. The problem is, it wasn’t supposed to be everyone else carrying this legacy—it was supposed to be Jo Cox. “We were just starting,” Holguin says.

As the crowd in front of the high commission slowly dispersed, what was left of the memorial was the tangle of flowers that mourners had piled on the top step. Above the colourful blooms was a poster-sized photo of Cox standing along the Thames next to the houseboat she and her family called home while they were in London. Dressed in jeans, sandals and a cowl-neck sweater, with one hip cocked and a hand in her pocket, she wouldn’t have looked out of place in a university library. But then there’s her face: Cox peers out from underneath her brows, her eyes blazing with intensity, her mouth screwed into a impish grin.

You can see in that photo exactly why so many people might have underestimated Cox when they first met her, and why they would have figured out very quickly how wrong they were.

People take part in a tribute titled, "More In Common: A Worldwide Celebration of Jo Cox" at the British High Commission in Ottawa on June 22 that marked what would have been the 42nd birthday of tragically killed MP Jo Cox.