And the problem is bigger than just the smell 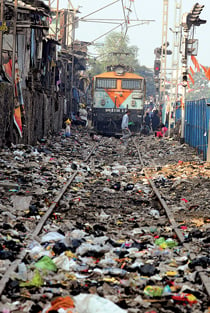 Some 30 million people travel by train in India every day, people who, as all of us must, go to the washroom from time to time. And so every day, a huge volume of human waste pours out of the bottom of trains, from both Western-style and squat toilets inside, directly onto the country’s massive rail network. As engineers now realize, there is a steep hidden cost attached.

The problem isn’t merely one of odour and human hygiene. The open-discharge toilets used almost exclusively in India are causing significant damage to the country’s rail infrastructure, with “serious safety implications” due to the corrosion of rails and related hardware, according to a recently released government report on India’s rail system.

The report, authored by prominent scientist and engineer Anil Kakodhar, recommended that all of India’s 43,000 rail carriages be retrofitted over the next five years with holding tanks for human waste, at a cost of $600 million. There is raucous debate over fare hikes the nationally owned railway could use to address its ailing infrastructure. But more than just cleanliness is at stake.