A sad ending for the 'world’s loneliest polar bear'

From 2016: Arthur the polar bear never did make it to a refuge in Manitoba 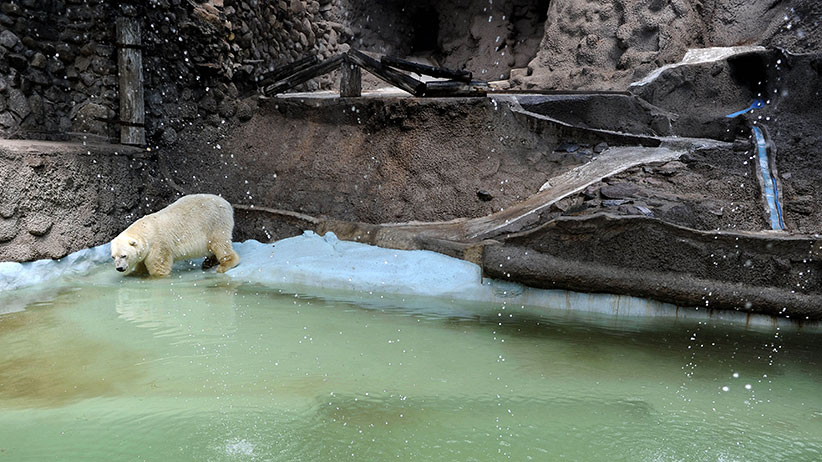 Arturo pictured at his enclosure on February 5, 2014. (Andres Larrovere/AFP/Getty Images)

On Nov. 23, 1985, the Buffalo Zoo announced the birth of Arthur and his twin sister, born to Becky and Herman Junior, on a 6° C Sunday. They were one of two sets of twin polar bears born that month, bringing a rare polar bear baby boom to the zoo. “Light up the lights, throw streamers,” the curator of mammals told the Associated Press at the time.

As a cub, Arthur was nursed by Becky but ignored by his father. At 10 months old, he was sold to the Fresno Chaffee Zoo in Fresno, Calif. He boarded a refrigerated truck in August 1986 and never saw his family again.

Growing up in California, Arthur lived a curious life for a polar bear. “His favourite thing on earth was a beer keg in the swimming pool,” says Lisa Merkord, the keeper of carnivores who worked with Arthur. “He would roll on it and kick it in the air.” Along with eating 33 lb. of meat and kibble each day, he adored orange slices, of which he would elegantly peel out the flesh. Arthur also amused himself with a ball. “We would smear it with peanut butter or smear it with blood,” says Merkord. “He was a dork, but you didn’t know that until you got to see him play.”

Related: It took 117 hours to land this polar bear photo

The heat of Fresno, located a five-hour drive from the Mojave Desert, led Arthur to turn green. His hair follicles collected water and grew algae. “He was always green,” says Merkord. “He was absolutely gorgeous.” Volunteers were enlisted to hose Arthur down. At dawn, when the zoo was nearly silent, Merkord would find Arthur sleeping with his head on his paws, making mumbling noises. “He was a little bumble bee bear,” says Merkord. “He was having good, happy dreams.”

At age eight, weighing 900 lb., Arthur outgrew his enclosure and he was donated to the Mendoza Zoological Park in Argentina. In a crate, Arthur was forklifted onto a transport truck and driven to the Los Angeles International Airport, with a bag of biscuits as carry-on luggage.

In Mendoza, Arthur, renamed Arturo, tried to start a family. In 1993, he met Pelusa, Spanish for “Fluffball,” a polar bear from Germany. “Pelusa was a very unusual polar bear,” says Gustavo Pronotto, the former director of the Mendoza zoo, who retired in 2014. “She was purple. The reason she was purple is that she had a yeast infection.” The illness led the zoo to spray her with antibiotics, inducing her violet hue. To Arthur, Pelusa was attractive, and the couple mated each spring.

Pelusa gave birth to a cub, but it died in its first year. The couple tried again, and three more times, but all five cubs died in infancy. It was not the first tragedy to befall Arthur’s family, says Diego Creimer of Greenpeace International. His grandparents, Maggie and Herman Sr., were killed in 1979 at the Buffalo Zoo in order to save a human vandal who trespassed into their pen after hours. In 2012, Pelusa battled cancer. She died at age 31, not young for her species in captivity.

In the wild, Arthur would have lived alone, but after Pelusa died, he was dubbed the world’s loneliest and most depressed polar bear. Social media spread images of Arthur melting on the lawn, sprawled out like a rug. In 2014, more than 500,000 people signed a Greenpeace petition addressed to Argentina’s president insisting that Arthur be moved to Winnipeg’s Assiniboine Park Zoo. “There was potential for giving him a good life in Assiniboine,” says Chris Enright, head of veterinary services at the zoo in Winnipeg. “That conversation unfortunately wasn’t able to go very far.”

Arthur found moments of joy. He celebrated his birthday by hacking at an ice block full of fruit (although he didn’t celebrate Christmas—“he wasn’t a Christian,” notes Merkord). In the spring of 2016, staff from Greenpeace and the Buenos Aires Zoo visited him on a day reaching 40° C. Arthur picked himself up from the corner, where he had been lazing away his days, and swam for an hour in front of the visitors. Pronotto says, “It was like telling them, ‘I’m in good health. I’m not that bad.’ ”

In late June, Arthur appeared stressed. Photos emerged of him squinting as if he were crying, which was actually caused by facial paralysis. On July 3, Arthur died, due to old age according to the Mendoza Zoo. He was 30, or 60 in polar bear years.