A suicide bombing hit Kabul. And then a phone rang in Ottawa.

Canadian Mohammad Yasir Mehrzad's father and two uncles were killed, leaving his mother and sisters with no one but him. 'The enemies of humanity did this.' 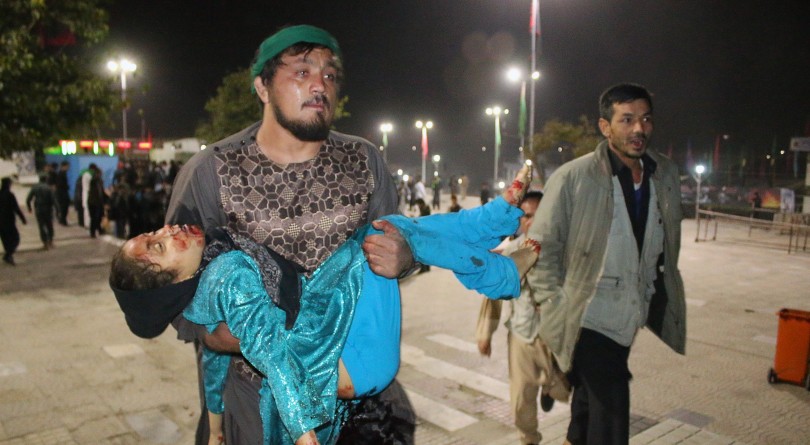 Wakil Hussain Allahdad carries a wounded girl after an attack by gunmen at the Karte Sakhi shrine in Kabul in 2016. Wakil was killed in a suicide bombing last Sunday. (ROHULLAH AMIN/AFP/Getty Images)

It’s the phone call that so many Afghan Canadians dread. There’s another suicide bombing back in Kabul, and you wait, and you hope that the call doesn’t come, but Mohammad Yasir Mehrzad’s telephone rang shortly after last Sunday’s suicide bombing at a voter registration office in the Dasht-e-Barchi district of Kabul. Among the 60 dead were Mehrzad’s father and two uncles.

The 32-year-old Mehrzad, who works as a technician in an Ottawa auto body shop, dropped everything he was doing. By the time we caught up to him he was already in Istanbul, waiting for a connecting flight to Afghanistan, and his thoughts were a jumble. With a wife and two children to support in Ottawa, he had suddenly become the primary breadwinner for his mother and his three sisters in Kabul.

“I am going now to Afghanistan to take care of my mother and my sisters, who have nobody to take care of them. There is no hope to living in Afghanistan if you are a woman and you are alone,” Mehrzad said. “The enemies of humanity did this. They do these horrible and stupid actions, and they leave people heartbroken. People who lose their families, they lose their hope.”

When the bomb went off, hundreds of people were waiting in line for the new national identification cards required to vote in this coming October’s parliamentary elections. It was a massive explosion. Windows were shattered several kilometres away. In claiming responsibility, Islamic State was helpfully candid: the point was to slaughter Hazara “apostates.” Dasht-e-Barchi is a Hazara ghetto on the west side of Kabul, in the shadow of the Paghman Mountains.

READ MORE: What really happened to Joshua Boyle and his family

A Shia Muslim minority, Afghanistan’s Hazaras have been subjected to periodic enslavements, massacres and pogroms since the early days of the Mughal Empire in the 16th century. Their persecution reached a bloody crescendo during the chaos of warlordism and the Taliban tyranny of the 1990s.

While Hazaras make up about a tenth of the Afghan population, they now constitute nearly half the population of Kabul, concentrated mainly in the Dasht-e-Barchi, Karte Seh and Chindawul districts. The Hazaras are Kabul’s poor, working mainly as laborers, cart pullers, taxi drivers, cleaners and factory workers, but they are quickly developing a successful middle class.

Hazaras boast the highest literacy rates and graduation rates in Afghanistan. Habiba Sarabi, the first woman to serve as a provincial governor in Afghanistan, is a Hazara. She’s the governor of Bamiyan, home to the giant Buddha statues the Taliban destroyed in March, 2001. Generally outward looking and cosmopolitan, Hazaras were among the most enthusiastic Afghan supporters of the NATO intervention after Sept. 11, 2001. They represent exactly what the Taliban and Islamic State hate most about modern Afghanistan. And Mohammed Yasir Mehrzad is the embodiment of what the jihadists hate most about modern Afghans.

Mehrzad spent several years as an interpreter and cultural adviser with the Princess Patricia’s Canadian Light Infantry and the Royal Canadian Regiment in Kandahar and Panjwai, the southern districts that saw the fiercest fighting with the Taliban following 9/11. Mehrzad emigrated to Canada in 2011 and he settled in Ottawa, where he lives with his wife Hakima Jafari and their two sons, Tamim, 7 and Taha, 3.

Canada’s Battle Group came home in 2011, and the Canadian Forces training program ended in 2014. While the United States and several NATO countries still have troops in the country, Ottawa’s focus turned to aid payments. Canada sends $150 million a year to Afghanistan for a variety of humanitarian, development and security programs.

When the general drawdown of NATO troops in Afghanistan began seven years ago, the pattern of terror attacks changed. Civilian casualties remain high—already, more than 1,500 civilians have been killed in the fighting this year, a six per cent spike over the death toll from the same period last year. But what’s new is the rapid deterioration of security in Kabul, Afghanistan’s capital—500 Kabulis were killed in terrorist atrocities last year, including more than 80 people in a single bomb blast in the diplomatic district, in May.

“Day by day the security is getting worse and worse,” Mehrzad said. “Even three years ago, the danger was not this bad.”

The recent ramping-up of attacks on Hazaras appears to have begun in 2016. On July 23 of that year, nearly 90 Hazaras were killed and roughly 400 people were injured when Islamic State bombed a peaceful protest in Kabul.

On the same day as the voter-registration bombing in Dasht-e-Barchi, two Hazara community leaders in Quetta, Pakistan, were murdered by assassins who fled on motorcycles. The killings were just the latest in a string of murders. Last month, Pakistan’s National Commission for Human Rights issued a report identifying 509 Hazaras killed and 627 wounded a various attacks since 2013.

Back in Kabul, Hazaras are losing faith in the capacity of President Ashraf Ghani’s “unity” government to maintain security, so they’ve begun to arm themselves. A colourful leader of Dasht-e-Barchi’s increasingly self-reliant Hazaras was Wakil Hussain Allahdad, one of Mehrzad’s uncles who died last Sunday. 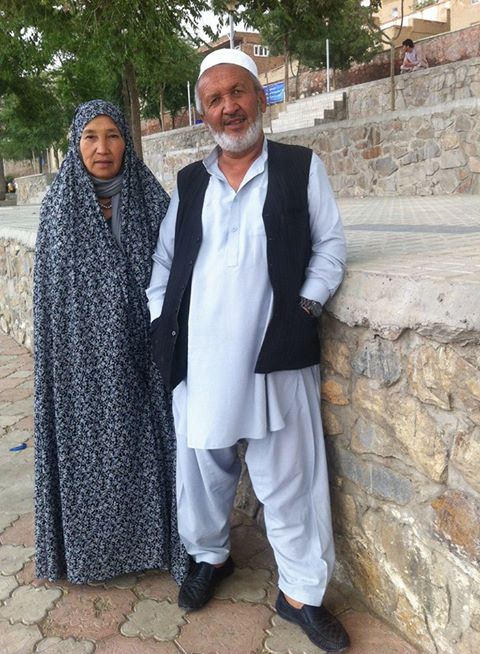 A successful entrepreneur and former professional wrestler, Wakil was something of a local hero. Because of his size and strength, he’d made a name for himself as a voluntary first responder, rushing to the scene whenever a shooting or a bombing shattered the peace of Kabul’s hardscrabble west side. He was known to carry victims to local hospitals, sometimes walking for miles.

Last June, Wakil rushed to the al-Zahra mosque when it was attacked by an Islamic State suicide bomber. Four people were killed and several were injured, including a man Wakil carried out of the burning mosque on his back. The year before, during the attack on the Karte Sakhi shrine, Wakil appeared in what was to become an iconic photograph (included here at the top of this story). He was covered in blood, carrying a wounded girl away from the carnage.

But now, Mehrzad’s Uncle Wakil is dead, and so is his uncle Muhammad Hussain Allahdad, and so is Mehrzad’s father, Gulam Sakhi Allahdad. And now his mother Toor Pekai Mehrzad, and his sisters Hamida, 29, Nooria, 19, and Shahra, 17, have no one to take care of them except Mehrzad, a former Canadian Forces interpreter and cultural adviser who now lives in Ottawa with a wife and two children, and works in an auto body shop.

For the time being, all Mehrzad knows about what the future holds is he will stay with his mother and his sisters for three weeks, and then he has to be back at work. After that, the future is not so clear.

“I am a Canadian now,” Mehrzad said. “The Canadian government is my government now, and I am asking them to help the poor people now, to do something to help the Hazara people.”

By the time Canada’s “combat mission” ended in 2011, 158 Canadian soldiers, a diplomat and a journalist had lost their lives in Afghanistan.Those deaths should not be for nothing, Mehrzad said.

“I feel so sorry for the Canadian soldiers and their families. All they wanted was to bring peace to Afghanistan, and in front of my eyes they lost so many soldiers, those families. And now it is the same as my father, who is gone.”