A tale of two Iraq wars

A high-level official in both Bush administrations on U.S. military action in Iraq and whether Obama can overcome George W's foreign policy mistakes 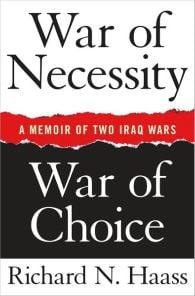 Along with Colin Powell, Dick Cheney, Paul Wolfowitz, and Robert Gates, Richard Haass is one of only a handful of people to have been at the highest rungs of the U.S. government for both Iraq wars. Haass was a special advisor to George H. W. Bush when Saddam Hussein invaded Kuwait in 1991, and served as the director of policy planning in the State Department when the younger Bush invaded Iraq in 2003. In his new book, War of Necessity, War of Choice, Haass argues that, despite their similarities, the two wars are marked by one crucial difference: whereas the first military operation in Iraq was borne of obligation, the second war was elective. Haass left the State Department in 2003 to become the president of the Council on Foreign Relations.

Q: Is there a moral distinction to be made between wars of necessity and wars of choice?

A: No. Wars of choice can be moral. For example, many people would argue that what the West did in Bosnia and Kosovo was truly moral even though it was a war of choice. And I expect there would be those who would go so far as to say that when the world chose not to intervene in Rwanda was immoral.

Wars of choice are just that—they’re choices. Usually, the interests involved are less than vital and there are other policy options. To me, though, it’s not a question of morality. When I call something a “war of choice,” it’s simply a description. It’s not a value judgment.

Q: Along with Bosnia, Kosovo, and Rwanda, you’ve also said Vietnam was a war of choice. Do modern wars tend to be wars of choice?

A: There’s nothing particularly modern about discretionary wars. I haven’t done a thorough study, but I would bet that most wars in history are wars of choice.

Q: How did you react when you found out the U.S. had launched an attack against Iraq in March 2003?

If you recall, the war began a few days earlier than people thought because there was thought to be an opportunity to get Saddam Hussein and others who were allegedly having a small meeting. It turned out not to be true. So I was surprised, but only that it started exactly then.

Q: It seems like in the lead-up to the war, in every instance where a debate could have taken place at the highest levels of the government, that debate failed to materialize. How were decisions being made?

A: There wasn’t a meeting one could point to in which the decision was formally presented and debated. It was a decision that happened more than it was made. And increasingly, the conversation simply assumed it. All of this was a sign of a sub-par national security decision-making process.

Q: Was there a legitimate debate that could have led to an attack on Iraq?

A: Sure. My opposition was, as I said in the book, 60/40. But I understand how people came down on the other side. There was an argument to be made for launching the war: Saddam had defied the will of the international community; he was not complying in full with various UN resolutions; the sanctions were not in good shape; he’d demonstrated throughout history that he was a threat to his own people and his neighbours; and, he was thought to possess chemical and biological weapons. All of those made a case for going to war.

Q: You write that, “More than anyone else except George W. Bush, Saddam was in a position to prevent the war.” Could you expand on that a bit?

A: In early 2003, Saddam could have been more forthcoming than he was, particularly when he was asked repeatedly by the weapons inspectors to account for various imports of certain materials.

It turned out that Saddam didn’t want to come clean, not because he was hiding anything, but because he was hiding the fact that he wasn’t hiding anything. He wanted his people and his neighbours to think that he had weapons of mass destruction. My own hunch is he discounted the possibility of a war or, even if a war was going to come, he didn’t think it would go as far as it did.

The question is whether the Bush administration and the Blair government would have accepted anything Saddam said as adequate.

Q: Were you or anyone else at senior levels hoping Saddam would back down?

A: I can’t speak about hoping, but I was suggesting as late as 2003 that the United States should reconsider the march to war. I was making the argument that we had what I thought were not simply viable but preferable alternatives. I was obviously in a distinct minority.

Q: You’ve criticized Bush for “locking into 9/11 as a foreign policy template.” How did that affect his view of the world?

A: It tended to be very black and white. It wasn’t a nuanced view. It tended to see terrorism as the dominant international issue and he often took what I would call a worst possible case analysis of events—if you couldn’t disprove something, then he would operate on the basis that it might be so.

All of this led the administration, I thought, to some unconstructive paths. Among other things, we wouldn’t negotiate with countries like Syria or Iran or North Korea.

Q: At the same time, Bush comes off relatively well in the book. You write that he’s “smarter, much smarter” than he’s made out to be.

A: I disagreed with some of his policies, including the policies about Iraq, but I believe that his detractors are wrong when they think he’s unintelligent. It’s just dead wrong based on my knowledge of the man.

Q: Is Iraq worse off?

A: I wouldn’t go that far. Iraq doesn’t have Saddam Hussein. It’s far more open politically than it was. One could have a long conversation about whether Iraq is worse off or better off. But I would say the region is worse off and U.S. foreign policy is worse off. Not only was it a war of choice, but it was a poor choice and it was poorly implemented.

Q: Your long-term, best-case scenario for Iraq isn’t exactly rosy, though. In the book, you write that it’s “likely to remain a divided and sometimes violent and dysfunctional country.”

A: On some arbitrary scale of one to 10, I would say probably the best you can hope for is an Iraq that’s around a seven. And even that’s optimistic.

Q: How much did the war change those prospects?

A: While Saddam was in power, you had no prospects for serious improvement. The best that could be said for life under Saddam is that the Kurds were largely left alone. For most other Iraqis, it was miserable unless you were part of the Sunni elite.

Iraqis have far more political freedom today than they’ve had, but they’ve paid a price for it in terms of physical vulnerability—four or five million have lost their homes.

Q: What do you think of Barack Obama’s choices so far with respect to Iraq?

A: I question some parts of the policy. I believe that the administration has probably made a mistake in setting all these formal timelines that will govern the disposition of American forces. My prediction is the administration and whatever Iraqi government emerges from the next election will have to revise those timelines. We may have to reconsider altogether having all American forces leave Iraq by the end of 2011.

My fear is if we didn’t do that Iraq would once again begin to unravel. The last thing the Obama administration needs is an Iraq on the verge of civil conflict again given all the other things it has to cope with.

Q: In the long-term, is there a way for Obama to correct the foreign policy excesses of the Bush administration?

The problem is that the United States is doing it today from a weaker strategic position than the one it enjoyed eight years ago. So whether it’s North Korea or Iran, the United States doesn’t have the leverage today that it had. I think the basic directions of the foreign policy make sense, but I can’t tell you today that Obama’s going to succeed.