A time for difficult decisions in Greece

After saying no to austerity, Greeks must realign their expectations of government so they correspond with the rest of the Western world 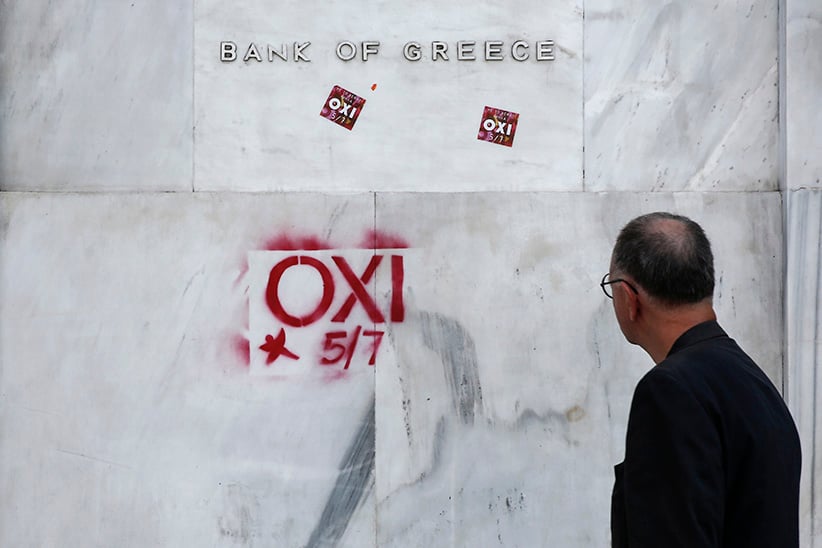 Despite their ancient ancestors’ exalted status as founders of democracy, modern Greeks are relative newcomers to the concept of participatory government.

The golden age of citizen-ruled Greek city states ended with invasion by Rome in the second century BCE. After the collapse of the Roman Empire came many more centuries of foreign rule, including several hundred years under the Ottoman Turks, imposition of an obscure royal family by European powers in the 1800s, Nazi occupation during the Second World War and a U.S.-backed military dictatorship during the subsequent Cold War. It wasn’t until 1974 that Greeks began participating in a stable liberal democracy of the sort Canadians take for granted. Their inexperience shows.

Last weekend in a nation-wide referendum, Greek voters rejected a so-called final proposal from the European Central Bank, the International Monetary Fund and the European Commission. These conditions—including higher taxes, pension reform, privatizations and cuts to subsidies—were deemed necessary to unlock future financial aid and prevent a debt default and banking crisis in Greece. What comes next is uncertain, although all parties say negotiations will continue. But regardless of whether the final outcome is a calamitous financial collapse, orderly exit from the eurozone or some new “final” proposal from the triumvirate of creditors, the only permanent solution to Greece’s situation lies in a dramatic change to the conflicted relationship between citizen and government that is the ultimate cause of the country troubles.

In his recent book The Full Catastrophe, about Greece’s current travails, former Wall Street Journal correspondent James Angelos notes that “Greeks, due to centuries of foreign domination, had anti-government feeling imbued in their blood. The government was a foe.” After centuries of hostile rule, Greeks came to see avoiding taxes and ignoring government edicts as a virtue. Once Greece became a fully formed republic in the postwar era, however, it became necessary to undo this deep-seated resentment toward government. The solution, as masterminded by former prime minister Andreas Papandreou during the 1980s, was to make Athens essential to the well-being of every Greek. The result was a massive employment boom in the public sector and an array of social programs unrivalled in generosity.

Before the financial collapse of 2008, Greek pensions offered retirees up to 96 per cent of their working income; Greece has one of the world’s lowest retirement ages. Public expenditures were overwhelmingly skewed to consumption. Between 2000 and 2009 increases in social benefits accounted for 94 per cent of the growth in government spending. Capital investment, necessary to build future productive capacity, actually declined as a percentage of GDP over this time. To win their citizens’ affection, the government of modern Greece offered present-day pleasure at the expense of tomorrow’s needs. It was an unsustainable bargain. All the while, tax evasion maintained its righteous sheen. (In 2010 Greece’s underground economy was estimated at 28 per cent of GDP.)

The result of last week’s referendum has been widely interpreted as evidence Greeks have suffered enough from foreign-imposed austerity. While some sympathy may be appropriate, given the sharp decline in living standards in recent years, it must be remembered that the ongoing crisis in Greece is a direct result of 40 years of decisions made by a naive and greedy voting public. No one should expect an endless banquet of indulgences without pausing to consider how and when it will be paid for. Greece was living an unrealistic fantasy masquerading as a modern economy. Now it’s time for Greek voters to make some difficult decisions. Simply saying no to further austerity is not a final answer to the country’s problems.

Whether they decide to maintain ties with the eurozone and accept further economic reforms or strike out on their own, Greeks must learn to realign their expectations of government so they correspond with the experience of rest of the Western world. Voters will have to recognize the impossibility of perpetually consuming more than is produced—as well as the necessity of investing for tomorrow. More important, the electorate must learn to combine an appropriate degree of skepticism toward politicians and their promises with an honest respect for the necessity of government and the taxes it requires.

Achieving harmony out of this basic tension between the conflicting impulses of government and its citizenry is what energizes and motivates successful democracies such as Canada. It is no easy job. But for a country that gave the world Aristotle and his eternal concept of the golden mean—where balance is preferred in all things and excess is to be avoided—it’s certainly not an impossible task.