A timeline of recent attacks on Egypt's Christians

Egypt's Coptic Christians have long been a favoured target of extremists, but the past five months been particularly bloody. 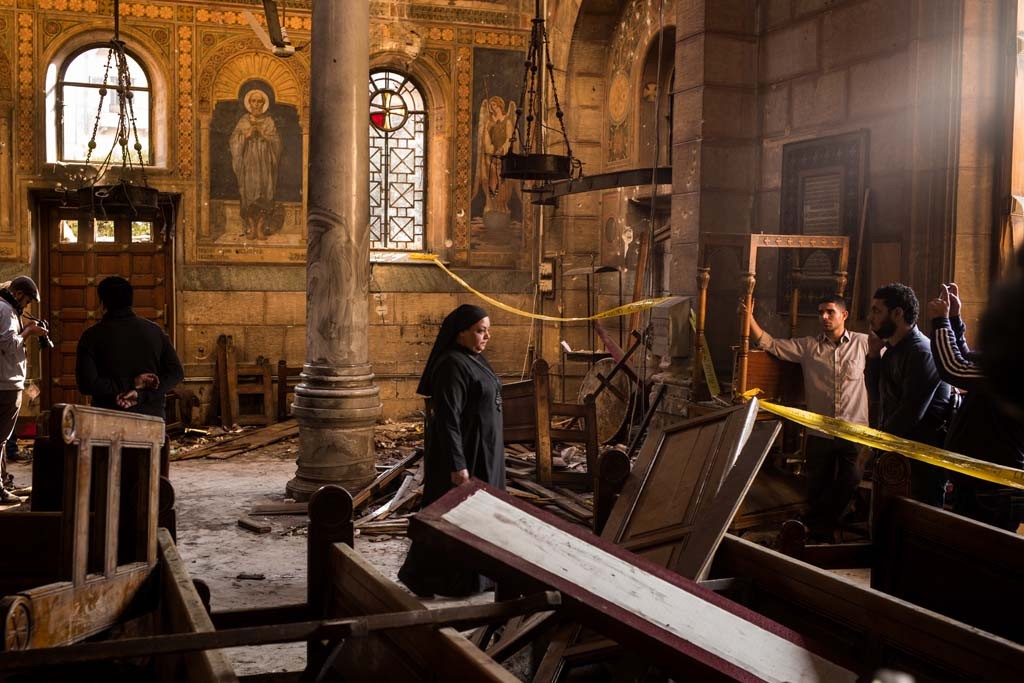 A nun walks through the shattered interior of Saint Mark’s Coptic Orthodox Cathedral of Abbassia in Cairo. A bombing wounded and killed congregants during morning mass. (David Degner/Getty Images)

CAIRO — Sunday’s bombings of two Coptic churches in separate cities claimed by the Islamic State group are the latest attacks on Egypt’s embattled Christian minority, increasingly targeted by IS and affiliated militants.

The Copts have long been a favoured target of extremists — they were struck with a similar church bombing just weeks before the country’s 2011 Arab Spring uprising, and Islamic militants gave them a particular focus during a crackdown on them in the 1990s — but the past five months been particularly bloody.

U.S.-based think-tank the Tahrir Institute for Middle East Policy said the attacks brought the total number of sectarian incidents against Copts to 26 in 2017, with a total of 88 killed including those at a major church bombing in December.

Following are major attacks against Egypt’s Coptic Christians over the past year:

Twin bombings, at least one by a suicide bomber, hit churches in the coastal city of Alexandria and the Nile Delta city of Tanta. At least 43 people were killed and scores of worshippers injured on the Palm Sunday attack, which narrowly missed a ceremony presided over by Pope Tawadros II in Alexandria’s St. Mark’s cathedral.

Hundreds of Egyptian Christians flee their homes in the northern part of the Sinai Peninsula, fearing attacks by Islamic State militants. The group’s North Sinai affiliate had killed at least seven Coptic Christians in the restive peninsula in less than a month.

The Islamic State group affiliate in Egypt releases a video vowing to step up attacks against the Christian minority, describing them as their “favourite prey.” It showcased a December attack on the church adjacent to Cairo’s Saint Mark’s Cathedral, which claimed the lives of 30 worshippers.

A bombing at a chapel adjacent to Egypt’s main Coptic Christian cathedral in Cairo claimed by IS kills 30 people and injuries dozens during Sunday Mass in one of the deadliest attacks carried out against the religious minority in recent memory. The high death toll serves as a grim reminder of the difficulties of Egypt’s struggle to restore security and stability after nearly six years of turmoil.

Pope Tawadros II says that since 2013 there were 37 sectarian attacks on Christians in Egypt, nearly one incident a month. A Muslim mob stabs 27-year old Coptic Christian Fam Khalaf to death in the southern City of Minya over a personal feud.

A Muslim mob ransacks and torches seven Christian homes in Minya after rumour spread that a Christian man had an affair with a Muslim woman. The mother of the aforementioned man was stripped naked by the mob to humiliate her.