After Robert E. Lee falls, will George Washington be next?

The U.S. president has raised the question, defending Confederate monuments. Here's why it's not a slippery slope at all. 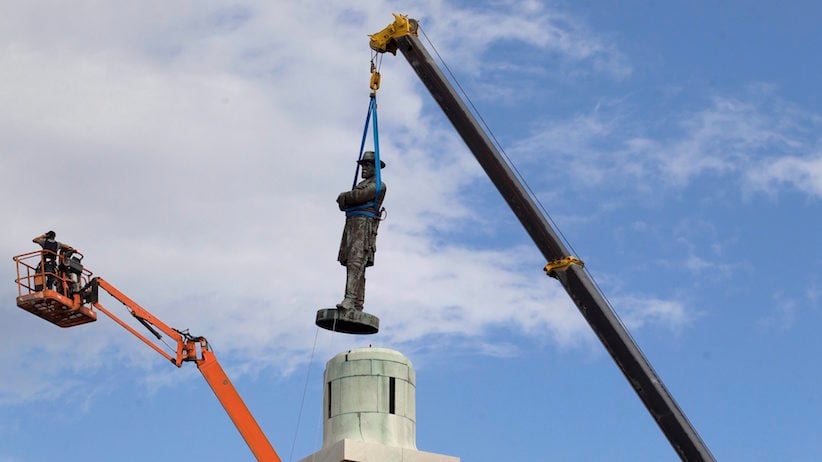 A statue of Confederate General Robert E. Lee is removed from Lee Circle Friday, May 19, 2017, in New Orleans. Lee’s was the last of four monuments to Confederate-era figures to be removed under a 2015 City Council vote on a proposal by Mayor Mitch Landrieu. (AP Photo/Scott Threlkeld)

George Washington is one of the founding fathers of the United States of America and the country’s first president. Robert E. Lee was the Confederate army general who fought on the wrong side of a bloody Civil War.

That’s the simple reason why many Americans are lobbying to take down statues of Lee, but not Washington monuments.

But in the aftermath of a white supremacist rally in Charlottesville, Va.—supposedly organized to protest the removal of a Lee statue—President Donald Trump has, in addition to blaming both the alt-right and the so-called “alt-left” for the deadly clash that erupted, come out firmly against those who want to remove statues of Confederate leaders.

“This week it’s Robert E. Lee. I noticed that Stonewall Jackson [another Confederate general] is coming down. I wonder, is it George Washington next week and is it Thomas Jefferson the week after? You know, you really do have to ask yourself, where does it stop?” Trump said, mentioning past presidents Washington and Jefferson’s history of owning slaves.

In a series of tweets Thursday morning, he added: “Sad to see the history and culture of our great country being ripped apart with the removal of our beautiful statues and monuments. You can’t change history, but you can learn from it. Robert E Lee, Stonewall Jackson – who’s next, Washington, Jefferson? So foolish! Also the beauty that is being taken out of our cities, towns and parks will be greatly missed and never able to be comparably replaced!”

The current president’s sudden obsession with Confederate statues has fuelled an ongoing national debate—and revealed that many Americans, like Trump, don’t see this as an obvious, clear-cut issue.

About half of Americans disapproved of the removal of the Robert E. Lee statue from a park in Charlottesville, according to a recent YouGov poll, but a closer look shows the divide is broken out largely by political party or race. Far more Republicans (78 per cent) than Democrats (27 per cent) object to the statue’s removal. Not surprisingly, far more whites (57 per cent) disapprove of Lee statues being taken down than blacks (11 per cent).

Why the division? After his death, Lee grew into the central figure of the South’s “Lost Cause” narrative, which presents him as a hero of the South fighting for constitutional ideals, rather than the leader of a movement that sought to tear apart the United States in defence of slavery.

“These statues have morphed into a symbol of racism, a symbol of bigotry, a symbol of the alt-right, a symbol of white nationalist movements,” explained Robert Wright Lee IV, one of Robert E. Lee’s own descendants, in an interview with Huffington Post. “It broke my heart to see a symbol of my family being used to allow such hate. All in the name of what my relative stood for.” He believes it’s time for statues of his great-great-great-great-uncle to come down.

But what about Trump’s belief that by taking down these statues, America is “changing history” and “changing culture”?

State leaders are unpersuaded that statues are the best way to remember these chapters in U.S. history. “Our Civil War history is important, but it belongs in textbooks and museums—not a place of allegiance on our Capitol grounds,” wrote North Carolina Gov. Roy Cooper in a statement posted on Medium.

Defenders of Confederate monuments have noted that Washington and Jefferson were both slave owners, and suggested that statues of these leaders should also therefore be targeted. But there is a fundamental difference: Washington and Jefferson are primarily remembered for their efforts to build the country, whereas Lee’s historical mark is based on his efforts to break the United States apart.

“This is not about the personality of an individual and his or her flaws,” Annette Gordon-Reed, a history and law professor at Harvard University, told the New York Times. “This is about men who organized a system of government to maintain a system of slavery and to destroy the American union.”

That’s the clear and simple reason efforts are underway across the nation to bring down Confederate monuments but not blow up half the faces on Mount Rushmore.

As for the Lee statue, one person who probably wouldn’t have wanted them erected in the first place is Robert E. Lee himself. Before he died in 1870—five years after the Civil War ended—Lee advocated against any such memorials.

“As regards the erection of such a monument as is contemplated; my conviction is, that however grateful it would be to the feelings of the South, the attempt in the present condition of the Country, would have the effect of retarding, instead of accelerating its accomplishment; & of continuing, if not adding to, the difficulties under which the Southern people labour,” Lee wrote in a letter dated 1866.

Lee did add there was one place that should be protected to remember those who fought and died for the Confederates: their gravestones.