After the Grenfell inferno, a whole new terror

Tormented survivors wait for news of friends and family : 'I can still hear the screaming in my head two days later,' says one. 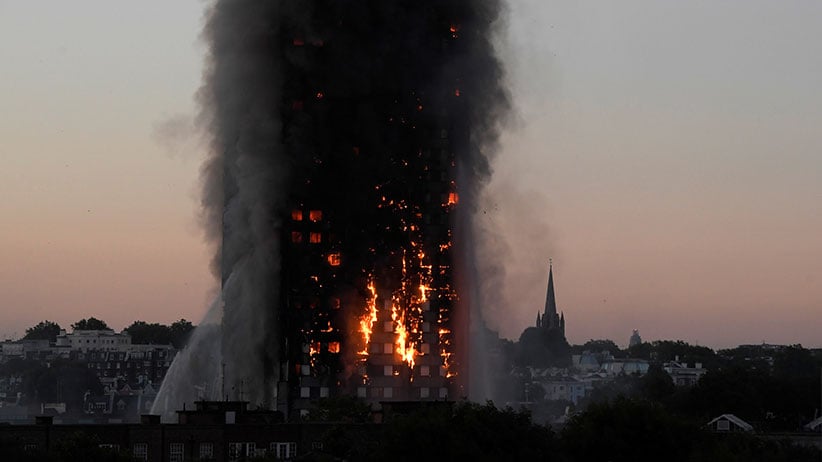 The faces of the missing plaster every bus shelter, lamp pole and public building in London’s North Kensington neighbourhood. Men and women, entire families and even a few lone children smile out from casual holiday snapshots and school portraits. At the top of each photo is scrawled a name and at the bottom a mobile number. The posters are mostly handmade and hastily constructed—small public emblems of a neighbourhood consumed with private grief.

Each face has its own story, and as the days after the fire march on, most are unlikely to end well.

At last count, the number of missing was up to 76, while the death toll stood at 30. The police have said the latter number is expected to rise significantly in the coming days.

Outside the St. Clement Church and Community Centre just south of the tower this morning, “the list” was all people wanted to talk about—who was on it, who wasn’t, who had never been heard from again.

Hamid, a Grenfell resident in his 40s, had just arrived looking for food and supplies after being released from hospital for smoke inhalation. He asked that his last name not be used for the privacy of his family. “I came out into the hallway and there was smoke everywhere. I ran down all the stairs and came outside,” he told me in a breathless voice, his dark eyes scanning the crowd. “I’m okay now, but my wife—I still don’t know where she is.”

The survivors of Grenfell Tower are now faced with terrible uncertainty. In addition to losing their homes and all their possessions, the people here will have to wait days, possibly even weeks, for information about loved ones lost in the blaze, as rescue teams comb the wreckage of the smoking tower looking for bodies. Forensic teams will use DNA records, fingerprints and dental records to identify the dead, but the process, police say, will be painstaking. In the worst cases, Metropolitan Police Commander Stuart Cundy has warned, bodies may not be able to be identified at all. As was the case in the aftermath of 9/11, for some families of Grenfell victims there may be no clear resolution at all.

Despite this, the official names of the dead are beginning to trickle in. The first victim to be named was Mohammed Alhajali, a 23-year-old Syrian refugee who came to the U.K. three years ago after fleeing the war in Syria with his brother Omar.

In a tragic interview with the BBC, his brother recounted the awful tale of how he fled the building, assisted by emergency workers but blinded by smoke, only to get outside and realize Mohammed was not with him. When Omar called him, his brother answered and they spoke on the phone as flames swallowed the building. “Why you left me?” Mohammed reportedly said. Speaking to reporters, Omar broke down several times in obvious horror and survivor’s guilt. “I saw the fire in the flat from outside. I was watching the flat. It was burning and my brother was inside. The thing is we came from Syria to be safe here and now we are dying here,” he said.

Talking to the residents milling around outside the Latymer Christian Centre, where an impromptu shrine has popped up, the secondary effects of the tragedy become apparent. John Codon, 53, lives in a high-rise building just across the road from Grenfell and has done since he was 11 years old. He is physically disabled (he uses a mobility scooter), lives on the seventh floor and says he doesn’t feel entirely safe at home having witnessed the fire on Tuesday morning. His building isn’t covered with the external cladding that many believe caused the spread of the fire at Grenfell, but it only has one stairwell and lacks a sprinkler system.

Codon tells me he had three close friends who died in the blaze. “My mate Tim got out with his daughter and then went back in for his dogs and that was the last anyone’s heard of him,” he said. Codon says he watched the fire all night from his bedroom window as it consumed the tower. “It was like nothing I’ve ever seen before. It was impossible to look away. I saw six different people jump from as high up as the 10th floor and heard them land. It was awful. In the end, my [caregiver] arrived and I said to her, ‘Please God, shut the window, I can’t listen to the screams anymore.’ I can still hear the screaming in my head two days later.”

Leaving the site this morning, a motorcade swept by, carrying the Queen and Prince William who were arriving to meet with emergency services and victims. Yesterday it was Labour Party leader Jeremy Corbyn and Prime Minister Theresa May (though she skipped the victims and only met with the police and fire brigade—a decision that was widely viewed as callous).

Many more celebrities and public officials will descend upon this place in the coming weeks, and the political fallout will likely be enormous. It is a tragedy that will end up meaning many different things to many important and powerful people. And then there is John Coden, across the street, who looked on helpless as many of his neighbours died. “I just sat there and thought, ‘That could be me in there,’ ” he said, “And what would anyone do to stop it?”