Aide to China's former leader gets life in prison for bribes 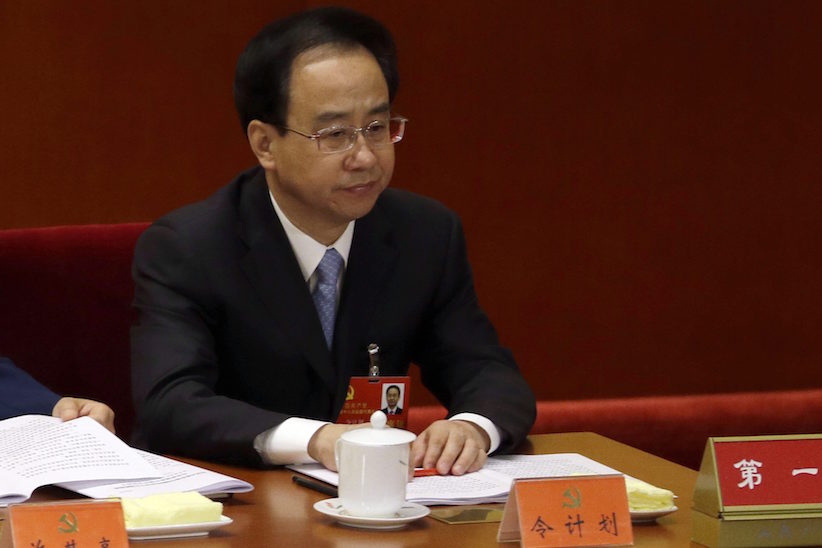 In this photo taken Thursday, Nov. 8, 2012, Ling Jihua, a loyal aide and confidante to then President Hu Jintao, attends the opening session of the 18th Communist Party Congress held at the Great Hall of the People in Beijing, China. (AP Photo/Ng Han Guan)

BEIJING — A former top presidential aide and consummate Chinese political insider was sentenced Monday to life in prison for taking bribes, illegally obtaining state secrets and abusing his power in a downfall set off by an alleged coverup of his son’s death in a speeding Ferrari.

A court in the northern port city of Tianjin delivered the verdict against Ling Jihua nearly one month after the trial, which was held behind closed doors because the case involved state secrets, the official Xinhua News Agency said. Ling told the court he would not appeal, Xinhua said.

“I accept all charges and the verdict,” Ling told the court in comments broadcast on China’s main evening news. “I will not appeal the judgment pronounced by the chief judge.”

His fall has been a blow to the Youth League bloc within the party, which had centred around Hu and is seen as a contending force for Hu’s successor, Xi Jinping. Members of the bloc in the top leadership have seen their powers diminished since Xi took over, said Willy Lam, an expert on Chinese elite politics at the Chinese University of Hong Kong.

After the verdict, Ling made a “humble apology to the party and the authorities that have handled my case,” according to video from the courtroom broadcast by state-run China Central Television.

He was shown expressing his gratitude to the court for “offering humanitarian care” of him. Chinese courts are controlled by the Communist Party.

Ling fell out of political favour in 2012, just ahead of a once-in-a-decade power transition, when he was allegedly involved in the coverup of his son’s death in a speeding Ferrari with two nude or half-dressed women as passengers.

In September of that year, shortly before Xi Jinping replaced Hu as party chief, Ling was transferred to the party’s United Front Work Department in what was widely seen as a demotion.

Soon afterward, Ling lost his remaining positions within the party’s upper echelon. In 2013 he was made a vice chairman of the powerless advisory body to China’s ceremonial parliament.

While working at the United Front Work Department and on the parliament’s advisory body, Ling obtained a large amount of state secrets through his contacts at the General Office, violating China’s rules on state secrets, Xinhua said.

The Xinhua report on the verdict made no mention of Ling’s brother, Ling Wancheng, who is believed to have fled to the United States with sensitive information about China’s leadership and could deliver an intelligence windfall should he defect.

The New York Times reported that the Obama administration has rebuffed Chinese requests for Ling Wancheng’s repatriation and has warned China about covert agents seeking his whereabouts on U.S. soil.

Lam, the political analyst, said Ling Jihua apparently had co-operated with the authorities and might have promised not to further divulge the secrets he obtained, since he was given only five years for illegally obtaining state secrets.

“The lenient treatment is in return for his co-operation not to divulge state secrets he might have given to Ling Wancheng,” Lam said.

Ling was sentenced to life imprisonment for taking $11.57 million in bribes, either directly or through his wife and son, Xinhua said. Those who bribed Ling included provincial party chiefs and prominent businesspeople.

Ling also was given four years in prison for having used his powers to obtain favours, such as job changes, promotions, and property purchases, for his associates, Xinhua said.

He came under investigation in late 2014 and was formally arrested in July 2015. He was indicted in May.