One picture, nearly a thousand words: Air Force One lands in Cuba 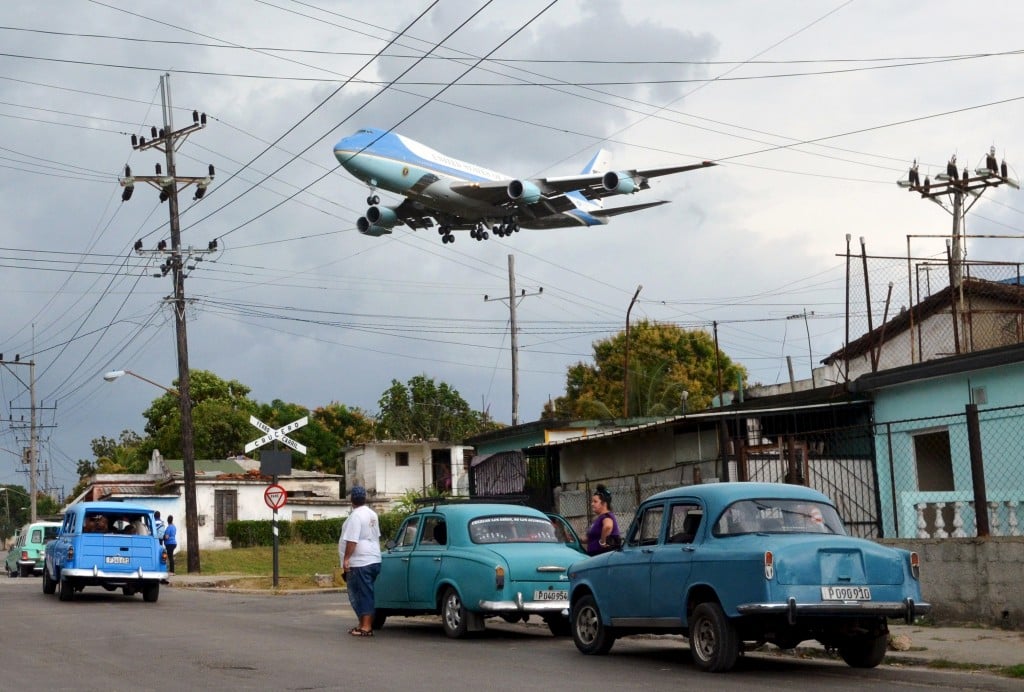 Air Force One carrying U.S. President Barack Obama and his family flies over a neighbourhood of Havana as it approaches the runway to land at Havana’s international airport, March 20, 2016. (REUTERS/Alberto Reyes)

No doubt at some point during Barack Obama’s visit to Cuba this week, there was going to be a juxtaposition of this kind—where the realities of life in Cuba today would be set against how things have gone in the nation just to its north, the one under whose embargo Cuba has lived for over 50 years. Maybe, though, we did not expect such a contrast so soon, even before Obama touched down.

The details of the photo taken by a Reuters stringer on the island are striking: residents of Havana look skyward as a symbolic stand-in for the massive weight and might of the United States of America bears down on them. It is fitting too, perhaps, that a few of them stand next to their almendrones, the Frankenstein-like, aging American-made cars that have been constantly retrofitted and rebuilt since the trade embargo dropped down in 1957, denying Cubans access to new vehicles outside of a few Ladas and other odd imports.

If they didn’t serve as such before, the cars in this picture, idle below the incoming jumbo jet, are a helpful reminder now of what, exactly, happened during those embargoed decades—technological progress, yes, as well as progress of other kinds. But they are a reminder also of something else: the creation of want. Want on the side of the Cubans for what much of the rest of the hemisphere (and world) was getting, but also the want created on our side of things—want of resources, consumer products, and status.

Related: Maclean’s goes to Cuba to find out what Cubans want from Obama’s trip

Most would agree that the want created in North American society in the last 50 years is a more positive one than that imposed on Cubans in the same timeframe. It is better to want for a new iPhone than to want for food, obviously. And yet, as Cuba and the U.S. normalize relations, people are travelling to the island before Americans “ruin it,” as the Associated Press put it recently—as if there is an inherent acceptance that what we agree is better might not actually be so.

“Cuba has a very authentic atmosphere, which you see nowhere else in the world,” one man from Israel told the AP. It is an interesting way to categorize a society that has lived under the thumb of a communist dictator for more than half a century. This is not to deny Cuba a distinct culture, but merely to highlight the word “authentic.” What makes it authentic? “I wanted to see it before the American world… but also the modern Western world comes here,” the man told the AP. Beyond the false assumptions this makes of Cuba and Cubans (that they aren’t capable of shaping their own future), there is in this projection a yearning, a wanting.

This is the weirdness of the modern Western world: We are the best and also the worst. That incoming plane is equally the harbinger of promise and of doom, an invitation to look ahead but also to look out. For our culture is great but also terrible. Our Internet access is amazing but we are terrified. Our shopping malls are full but our hearts are empty. Our democracies are excellent but, well…

It is on this last point we might pause the longest these days. As President Barack Obama touched down in Cuba, back in the United States, presidential hopefuls, most notably Donald Trump, continued to push Americans to consider the same word uttered by that tourist: authenticity. In the U.S. these days, the word seems to mean simplicity in the form of a no-nonsense, unfiltered mouth. It means also nostalgic simplicity, particularly in the form of a slogan demanding that America must be made “great again”—that it return to a place in time before it ruined itself. A time when the U.S.A. was No. 1. A time when they told the world what was what. A time when they might embargo an island nation for half a century. A time before all the doubt.

So, that photo. Air Force One, not merely flying in, but asking its origin as much as its destination the same question: How does a nation become great again?