Peter Greste: 'I can't tell you how estatic I am to be here'

By The Associated Press February 4, 2015 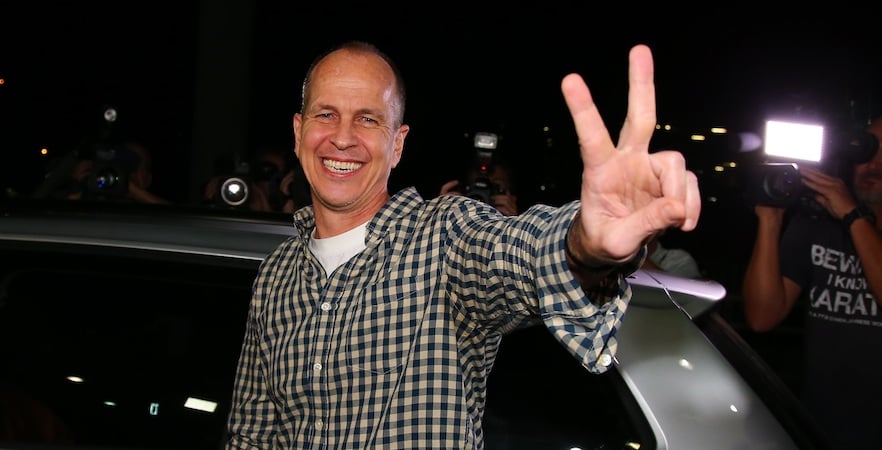 SYDNEY, Australia — An Al-Jazeera reporter who spent more than a year in an Egyptian prison returned home to Australia on Thursday, where he was greeted by friends and relieved family members who had tirelessly campaigned for his release.

Peter Greste, 49, who was released on Sunday after 400 days behind bars in a case widely condemned as a sham by human rights activists, landed in the Queensland state capital of Brisbane early Thursday morning after spending the past two days recuperating in Cyprus.

Supporters held up signs at the airport saying, “Journalism is not a crime.”

“I can’t tell you how ecstatic I am to be here,” Greste told reporters. “This is a moment I’ve rehearsed in my mind at least 400 times over the past, well, 400 days. But this is all tempered … by real worries for my colleagues.”

Free in Cyprus! Feels sweet. Peter back online for first time in 400+ days. Special thanks to Mike 4 nursing twitter pic.twitter.com/APATL1RljI

The fate of Greste’s still-jailed Egyptian colleagues remains unknown. Egyptian-Canadian Mohammed Fahmy and Egyptian Baher Mohammed were arrested along with Greste in 2013 over their coverage of the violent crackdown on Islamist protests following the military overthrow of President Mohammed Morsi. Egyptian authorities accused them of providing a platform for Morsi’s Muslim Brotherhood, now declared a terrorist organization, though officials never provided concrete evidence.

Australian Prime Minister Tony Abbott thanked the Egyptian president by telephone on Tuesday for his help in securing Greste’s release.