All the jail’s a stage in the cash-strapped country 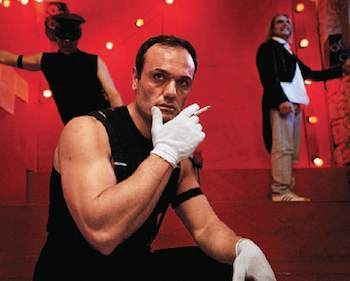 Italy’s prisons are so overcrowded and underfunded that living conditions were recently deemed human rights violations by the European Union. Oddly enough, they’re also at the heart of the country’s newest arts trend: prison theatre. As Italy’s cash-strapped government continues to slash funding for the arts, the country’s theatre enthusiasts are increasingly turning to prisons for a dose of culture. Almost every other jail in Italy now boasts an active theatre troupe. Rome’s high-security Rebibbia prison has sold more than 30,000 tickets since 2006; its take on Julius Caesar, starring mobsters and murderers, went on to become the subject of the award-winning 2012 film, Caesar Must Die.

While some Italians may be dismayed that unpaid convicts are overshadowing the country’s law-abiding artists, the government believes the programs teach prisoners empathy and trust. To Ivana Parisi, who organizes drama programs in a handful of Tuscan prisons, they enable prisoners to have “a dialogue with the outside world.”

FILED UNDER: Caesar must die Rebibbia