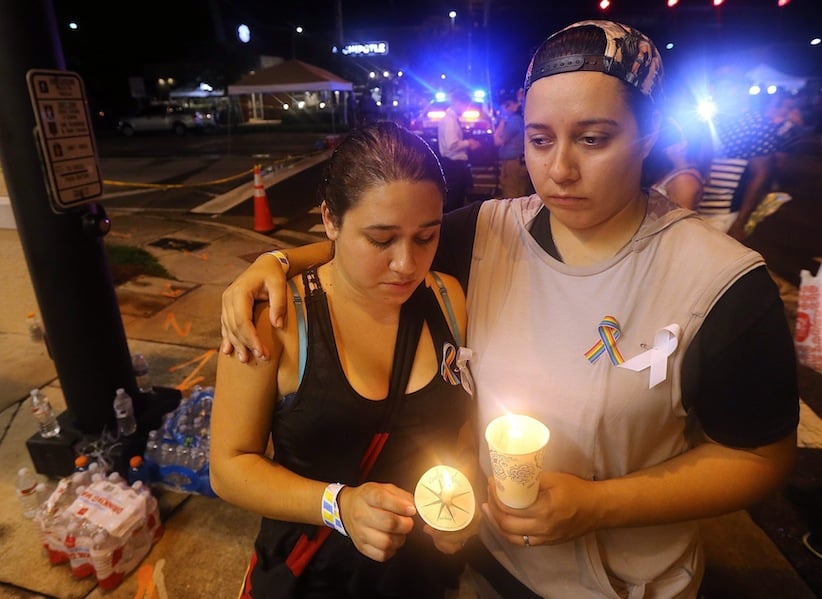 Sonia, left, and Andrea Parra, who said they lost five friends in the Pulse nightclub shooting and have not heard from seven others, hold candles on the street corner near the Pulse holding their own vigil Sunday night in Orlando, Fla., June 12, 2016. (Curtis Compton/Atlanta Journal-Constitution via AP)

ORLANDO, United States — Omar Mateen was more than just a homicidal, jihadist-inspired homophobe when he shot his way through an Orlando nightclub early Sunday morning, according to a couple of the establishment regulars.

He was also a repeat visitor.

A drag-dancing married couple described seeing Mateen as many as a dozen times at the gay-friendly nightclub where he’d later embark on the single worst gun massacre in modern American history.

Ty Smith and Chris Callen recalled the eventual killer being escorted drunk from the Pulse bar on multiple occasions, including one incident where he pointed a knife at a friend.

Both professed shock at seeing his face on TV: “It’s the same guy,” said Callen, who performs under the name Kristina McLaughlin. “He’s been going to this bar for at least three years.”

They expressed incredulity at the story being told by Mateen’s father in the wake of the shooting, that the gunman had once been scandalized during a visit to Miami by the sight of men kissing each other.

They say Mateen saw plenty of men kiss — and far closer to home than Miami.

“That’s bullcrap, right there. No offence. That’s straight-up crap. He’s been around us,” Smith said Monday in an interview at the GLBT Community Center of Central Florida.

“Some of those people did a little more than (kiss) outside the bar…. He was partying with the people who supposedly drove him to do this?”

Smith said the sometimes-visitor would show up with a buddy and let loose in a way he couldn’t when he was closer to the family home in Port St. Lucie: “(He’d get) really, really drunk… He couldn’t drink when he was at home — around his wife, or family. His father was really strict… He used to bitch about it.”

Neither Smith nor Callen would speculate on the sex life of the man who called police from inside the club early Sunday to profess his allegiance to a Middle East militant leader as he gunned down at least 49 people in cold blood.

But they expressed doubt over the version conveyed by Mateen’s Afghan-born father.

The Daily Beast also reported Monday that the gunman frequently lunched at a diner where the waiter was an openly gay high-school classmate and drag queen. That classmate, Samuel King, said Mateen was friendly; voiced no issues with gays; and might even have gone to see a drag show once or twice.

In separate interviews, both Callen and Smith described one incident that unnerved them.

They said they decided to keep their distance from Mateen after he exploded in anger at a joke told by one of their friends, possibly about religion: “He ended up pulling a knife,” Callen said.

“He said if he ever messed with him again, you know how it’ll turn out.”

Now they’re grappling with the shock of losing close friends. Pulse was like a second home to the couple after they moved from Indiana, and found new acceptance in Florida’s more socially liberal climate.

Like several people interviewed Monday, they took exception to media descriptions of Pulse as a gay bar. Yes, they said, it has a predominantly gay clientele, but it catered to everyone.

Callen said he wished he had a place like that when he was an 18-year-old in Indiana. The place was so tolerant they even let him perform when he moved here four years ago and was far from ready for prime time.

“And I grew to the queen that I am today… Straight people would come in. Couples. They would get up there and dance. They’d get birthday shots,” he said.

“(It’s a) place where you could come out. Just be you. To love who you are… That’s what Pulse taught us.”

The weekend’s violent acts are spurring other signs of rapprochement between the city’s communities.

A sign outside Orlando’s LGBT centre warns that people should expect a security search of their bags upon entering. But visitors Monday overwhelmingly had acts of kindness on their mind.

Officials there said the loading area was filled with supplies people had dropped off, such as bottled water for families awaiting news about their loved ones.

One organizer said 200 people had responded to calls for grief counsellors. So many showed up that they had to create a database to keep track.

Rob Domenico said straight and gay people were lining up for hours to donate blood, in spite of U.S. restrictions on blood donations from men who have had sex with a man in the previous year.