He was hard to see, unless you were up close. But there were large video screens with loudspeakers, and the people who came to witness Donald Trump take the oath of office gathered around these to watch the ceremony. They were mostly white, and likely from somewhere else—in the District of Columbia, only four per cent of the voters chose Trump.

There were benedictions, and military bands, and when the Chief Justice congratulated the new President there were cheers and applause. In President Trump’s inaugural address, when he promised to “eradicate radical Islam,” or “bring jobs back to America,” the crowd clapped and hooted. A few protesters booed, or silently held up signs denouncing the new President. But for most of the people there, the mood was hopeful and they welcomed the promises to rebuild America—to make it great.

I stood by the Washington Monument, which looked over it all, in the centre of the National Mall, halfway between President Trump standing on the Capitol steps and Abraham Lincoln watching from his memorial. Unlike past inaugurations, the monument was not surrounded with people. The crowds were much smaller, and their backs were turned on the white obelisk as they craned for a glimpse of their new leader. 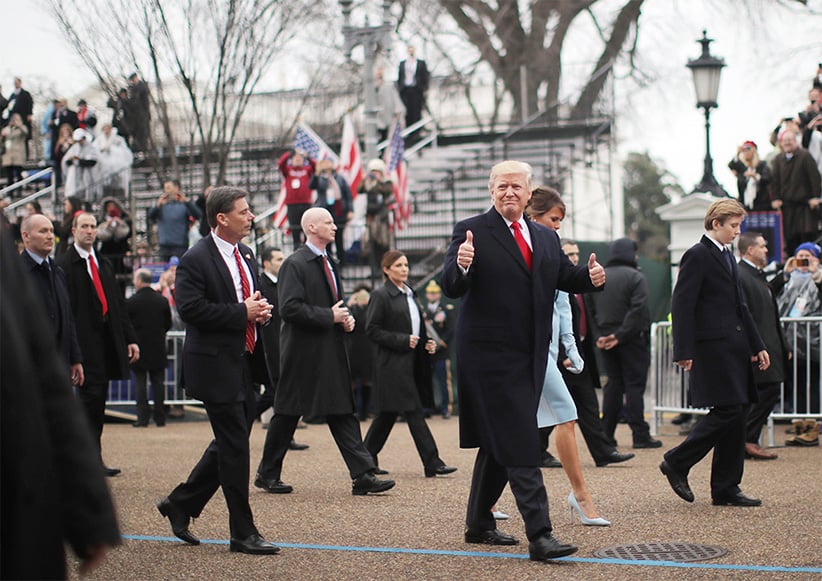 U.S. President Donald Trump gestures while walking with wife Melania and son Barron during the Inaugural Parade in Washington, January 20, 2017. Donald Trump was sworn in earlier as the 45th President of the United States. (Carlos Barria/Reuters)

If the people had turned their heads to look back, at the low-flying helicopters circling behind us, perhaps they might have noticed the Washington Monument is not one uniform colour. About a third of the way up the stone changes very slightly and becomes more golden and smoother, the workmanship improves and the blocks fit better. The difference is hard to notice, but once you do, it’s obvious.

After George Washington’s death, efforts to honour his legacy were derailed by partisan squabbling, disagreements on the design, and a debate about whether it was even appropriate for a republic to memorialize its leaders. It took 50 years before Congress funded the construction of the monument.

VIDEO: What Americans think of their new president

But four years after work began, the political mood shifted. The American Party, a populist movement of mostly dissatisfied rural white men, rose up suddenly against the political establishment. They were called the Know Nothings, and the movement portrayed new immigrants as the source of all crime, rejected the increasingly cosmopolitan culture of the big cities, and opposed trade. By the 1850s, they had taken control of several state legislatures and city councils across the eastern seaboard.

In D.C., Know Nothing supporters vandalized the Washington Monument, threw some of its stones in the Potomac, halted construction, and then took over the organizing committee. They controlled it for four years, but the Know Nothings were so ineffectual and disorganized only a couple of feet were added during this time.

Eventually, the political tide rolled back, the American Party grew unpopular and faded, the country moved on, and the monument’s organizing committee was reformed. A new quarry with better marble was found, and the design was improved. The few stones that had been laid in the previous four years were mostly from rejected masonry that littered the site. These were removed or recut. Congress applied more resources, the public contributed, and eventually, decades after it was begun, a capstone was placed on the top. The Washington Monument became the towering sentinel that still watches over Capitol Hill, the White House, the Supreme Court and all the people who fill those buildings.

And the Know Nothings, the populist party that promised to return America to Americans—which terrified immigrants, and which many feared would destroy democracy—their only legacy is a faint line few people even notice, a third of the way up the monument, where work paused temporarily, but where the better stone was later laid above.