How the new U.S. border chief aims to boost trade and beef up security with Canada 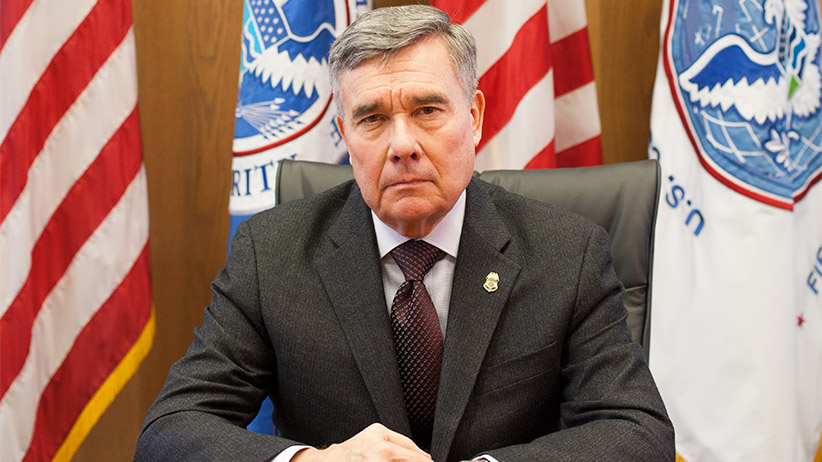 Travel to the United States by road, rail and sea could undergo a major revamp as a result of a new agreement between Canada and the U.S. In January, we wrote about commissioner of U.S. customs and border protection R. Gil Kerlikowske and his border plans:

The commissioner of U.S. customs and border protection, R. Gil Kerlikowske, arrives at the border crossing with Canada in Buffalo, N.Y. Freezing rain is pelting the Peace Bridge, the busiest northern crossing for passenger traffic and the second-busiest for cargo. He has just come from San Diego via Singapore and Brazil. The jet lag and too many cancelled flights (he flies commercial) have given the 65-year-old native Floridian a bad cold. Instead of handshakes, he offers elbow bumps.

It’s been one crisis after another since Kerlikowske took the helm of America’s largest law enforcement agency last March—just as shocking numbers of undocumented children from poor Central American countries were arriving at the southern border. They would number more than 60,000 by year’s end. Barely a week into the job, Kerlikowske visited a detention facility in McAllen, Texas. “I saw literally hundreds and hundreds of kids sleeping on concrete, under space blankets—those tinfoil-like things. I saw border agents trying to microwave burritos,” he says. “And I came back and I said to people in Washington, ‘You have a front-row seat at a humanitarian disaster.’ ”

Just as the administration wrestled the problem under control, September brought another crisis: Ebola, and fear that the disease could spread into the U.S. through air travel. “The Ebola issues were just overwhelming: how are we going to screen people? How are we going to make sure our people are protected?” he recalls.

Then November brought yet another bombshell: President Barack Obama declared that a large number of undocumented immigrants—an estimated four million people—could live and work in the country legally, if they have lived in the U.S. for five years and have children who are citizens. The policy will be administered not by the border patrol, but by immigration enforcement and other agencies housed alongside it in the Department of Homeland Security. Still, Kerlikowske’s organization became collateral damage in the political uproar following Obama’s announcement. When lawmakers passed a federal budget in December, they funded most of the government for a year but gave the Department of Homeland Security only enough money to last through March, to keep the political pressure on immigration before the new Congress. “Not knowing how much money we have causes me a lot of concern,” says Kerlikowske.

But this is the job Kerlikowske asked for. He was Obama’s top drug-control policy adviser when the President’s chief of staff called in August 2013 asking for names to lead the border agency. Kerlikowske, a 40-year law enforcement veteran, volunteered. “I really wanted the job,” he says.

Today, he’s back in familiar territory: Kerlikowske was police chief in both Buffalo and Seattle. Here on America’s northern border he has, nonetheless, been surprised by the economic impact of his agency, which has the power to help or hinder billions of dollars worth of trade. He sees big potential to make commerce flow more smoothly and to streamline Canada-U.S. security. But it won’t be without challenges, from legal and constitutional issues (like placing armed U.S. agents on Canadian soil) to financial and even meteorological ones.

The northern border has been an on-and-off source of American anxiety for years. Fears were fanned by a 2010 report by the U.S. Government Accountability Office that said only two per cent of the northern border was under “operational control” of Customs and Border Protection. Kerlikowske—who was in Seattle when Ahmed Ressam, an al-Qaeda-trained Algerian who entered Canada as a refugee claimant, tried to cross into the U.S. in December 1999 with explosives intended to blow up the Los Angeles airport—dismisses the number as “not an accurate reflection” of border security because of the narrow criteria it used. As for potential terrorists coming across the border from Canada: “We’ve seen people that have been associated with organizations that are recognized as a threat making attempts [to cross],” he says. “It is a very minimal number of people.” The close security co-operation between Canada and the U.S., he says, “has a chilling effect on people who want to do that.”

The Canada-U.S. border is 8,900 km long and manned by only 2,000 American border patrol agents, compared to 18,000 on the border with Mexico. There are also unmanned aerial vehicles (drones) patrolling long swaths of it, but dense forests can hamper their sight. Kerlikowske argues that the solution to security is not lining the Canadian border with agents—“the cost would be unbelievably prohibitive”—but more information-sharing by the Canadian government about high-risk individuals. “I think the continuing issue of recognizing and exchanging information about people who may be a threat to either Canada or the United States can be improved upon,” he says.

He is particularly keen that the two countries keep track of travellers headed to Turkey, a popular route for would-be jihadists seeking to join the fight in Syria. “We need to be able to identify those folks who may be headed to become foreign fighters, since they will be travelling on visas and passports that will allow them back into Canada or the United States,” he says. “The better Canada does in screening people who come into Canada, the better for us, the better for everybody,” he adds. 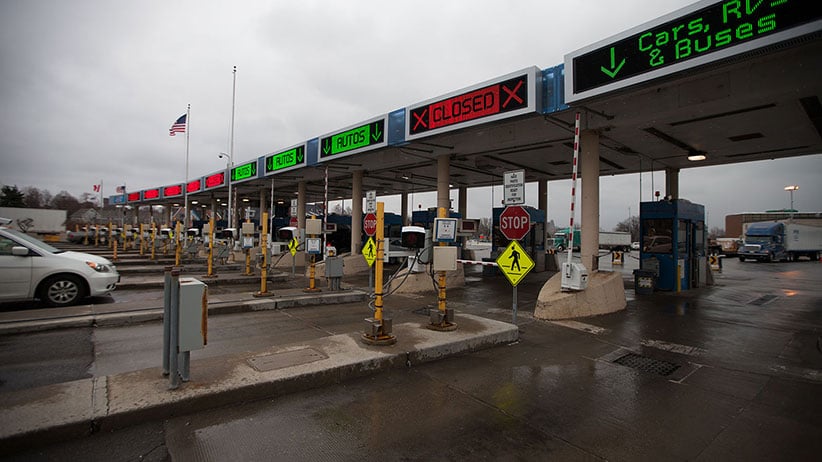 The biggest surprise, he says, is the other part of his job: facilitating trade. He was struck by the impact his agency could have on commerce by, for instance, delaying shipments of medicines or auto parts waiting in a warehouse for customs clearance. “The economic security and trade issues are huge,” he says.

In Buffalo on this wintry day, he announces a new smartphone app that lets drivers see wait times at all border crossings and plan the most efficient routes. “The game-changer in border wait-times is technology,” he says. Technology was at the heart of the Beyond the Border agreement signed by Obama and Stephen Harper in 2011. It focused on faster clearance for “trusted travellers” who enrolled in programs with names like NEXUS and FAST and submitted to a background check. That was supposed to free up resources for agents to focus on people about whom they had less information.

But three years later, truckers in particular were still frustrated by inefficiencies and red tape. One major irritant was their inability to cut through northern U.S. states when moving goods across Canada, due to U.S. bureaucratic requirements imposed in 2006. Kerlikowske was able to resolve the dispute. “This is huge,” says Jennifer Fox, the Canadian Trucking Alliance’s vice-president for trade and security. “For the 10 years I’ve been working on this issue to finally see some movement and have a way forward, it’s a testament to commissioner Kerlikowske’s genuine commitment to getting things done.”

Not everything is so easy to solve. Since the mid-1990s, there has been ambitious talk of creating “pre-clearance” facilities at the land border—much the same way air travellers can go through U.S. customs at Canadian airports before getting on a flight. Land-border pre-clearance could allow commercial trucks to be screened in Canada and then zoom through the physical border, instead of waiting in line with everyone else. At the Buffalo crossing it would allow for the construction of more customs lanes on the Canadian side, relieving a crowded U.S. facility that is locked between a residential neighbourhood, a park and Lake Erie.

While the two countries are now in the final stages of negotiating an updated pre-clearance agreement, land pre-clearance is still far from a reality. Legal differences between the two countries have long been a challenge. The U.S. has wanted vaster search powers on Canadian soil than are permitted under the Charter of Rights and Freedoms. Almost any search of travellers or property is permissible at a U.S. border crossing, however Canada’s top court has said border agents can only search a vehicle if they can articulate “reasonable grounds” for suspecting wrongdoing—a constraint U.S. officials refused to work under.

A second difference is privacy. The U.S. asked to record the licence plate numbers of cars that approach a pre-clearance facility but abruptly turn around—on the theory that they could be studying the crossing for vulnerabilities. Canada said such record-keeping would violate privacy laws. Moreover, American border agents have not been allowed to carry arms on Canadian soil—a deal-breaker for Washington.

Under Beyond the Border, Harper and Obama launched a small pilot project in Blaine, Wash., and now a bigger experiment is under way in Buffalo, where some 2,300 trucks cross each day. On the Ontario side of the Peace Bridge, U.S. border officials now operate on a wind-swept little piece of Canada a few hundred metres long and two lanes wide. Under a deal between the two countries, they are permitted to carry arms—a huge breakthrough for Washington. “I don’t think anybody is thrilled that we have to have more and more armed federal agents,” says Kerlikowske. “But for their protection and the protection of the public, having them trained and having them readily available is unfortunately the way of the world right now.” If the American agents want to arrest someone, they still must call in Canadian police.

The lanes are open only to truckers who have prepaid border-crossing fees and carry a transponder that beams information ahead to computers inside two customs booths. The trucks manoeuvre between portable radiation detectors toward a U.S. officer who checks their passport and asks basic questions. (One hiccup has been portable detectors failing in the extreme cold, causing backups.) If everything is in order, they cross the bridge to a special exit lane into the U.S. If they arouse suspicion, however, they cross the bridge to an inspection site. Because searches remain on the U.S. side, the pilot project is technically an experiment in “pre-inspection” not full “pre-clearance.”

So far, the experiment is promising. The Buffalo pre-inspection shaves off about 25 per cent of the two minutes that it takes, on average, to inspect and process a cargo truck. It may not sound like a big deal but it adds up. “If you reduce to 90 seconds per truck by 2,300 trucks per day, that is an extreme saving,” says Joseph Draganac, the assistant port director at Buffalo. Still, it isn’t exactly clear that locating in Canada is what causes most of the time savings. For one thing, the pilot project serves only drivers with prepaid fees, eliminating time-consuming cash transactions. “It remains to be seen” whether the pilot project merits being made permanent or replicated elsewhere, says Kerlikowske. “We are going to analyze the data.”

In the meantime, he’s talking with Ottawa about other ways to streamline trade and travel: can travellers who apply for a trusted-traveller card be screened by one government, instead of both? Could one country recognize agricultural inspection performed by the other to save time and money? Could electronic forms be made compatible?

Kerlikowske heads next to Toronto where the U.S. pre-clearance facilities at Pearson airport (as well as at the Calgary airport) are being moved. “Especially after the shooting happened in Ottawa, we are working with the airport so that our customs officials—who are not armed—will be behind security,” he said. Border patrol agents have been killed during his tenure; just in December, an armed man shot at agents on the Ambassador Bridge between Detroit and Windsor. He tells a photographer: “I’ve earned every one of these wrinkles.”