Trump called Clinton the devil and vowed to put her in prison. Another American presidential debate veers into the gutter. 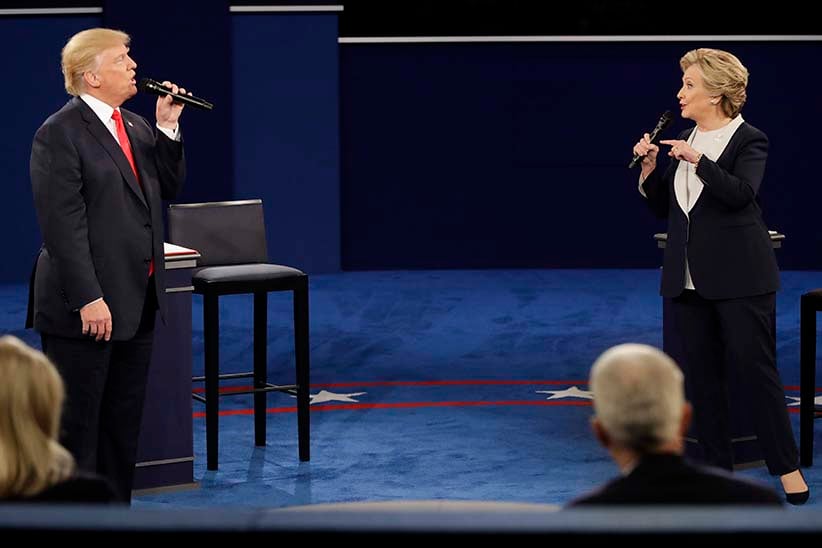 Sniffling to defend the indefensible after a leak of decade-old live-mic lechery and the defection of hundreds of prominent men and women of his own party, Donald Trump damned Hillary Clinton as “the devil” Sunday night during a chilling debate in the gymnasium of Washington University in St. Louis.

Clinton swung back by stating that the New York billionaire’s recently revealed boasts of forcing himself on unsuspecting women “represent exactly who he is.”

“It’s very good that someone with the temperament of Donald Trump isn’t in charge of the law in this country,” Clinton said in one memorable exchange.

“Because you’d be in jail,” Trump retorted. “I hate to say it, but if I win I am going to instruct my attorney general to get a special prosecutor to look into your situation. There have never been so many lies.”

MORE: Catch up on the second presidential debate with our liveblog

Circling each other across a blue-carpeted circle as taut and inescapable as a boxing ring, the two presidential candidates refused even a cursory touching of gloves before they came out snarling. Not until a trite request for mutual compliments by an audience member at the tail end of the evening did the tension abate, as the two historically unpopular candidates sniped at each with a venom and an energy that defied the proprieties of professional intercourse and belied their combined age of 138.

For Trump, already shunned by his own vice-presidential running mate and hundreds of other elected Republican officials, and with his boasts of grabbing women by the crotch and kissing them without warning deemed “unacceptable and offensive” by his own mortified wife, merely surviving 100 minutes in the spotlight had to be counted as a victory.

Yet to be determined is whether either candidate’s attacks would sway undecided voters in the swing states that will decide the presidency four weeks from now, or whether, as the Missourian Mark Twain once observed, “Anger is an acid that can do more harm to the vessel in which it is stored than to anything on which it is poured.”

Pressed by co-moderator Anderson Cooper of CNN whether he ever had, in fact, clawed a woman in the genitals, Trump protested, “No, I have not.”

“No, I didn’t say that at all,” Trump persisted. “This was locker room talk.”

Clinton responded, “You know, with prior Republican nominees for president, I disagreed with them on politics, policies and principles, but I never questioned their fitness to serve. Donald Trump is different.”

“It’s not only women,” she continued. “Because he has also targeted immigrants, African-Americans, Latinos, people with disabilities, POWs, Muslims and so many others. So this is who Donald Trump is.”

MORE: Donald Trump is still standing, but his wounds are fatal

Clinton soon dropped the subject of Trump’s toga-party morals in favour of back-and-forths on Obamacare, Middle East policy and energy extraction. But Trump’s demurral—and his survival to fight another day; specifically, Oct. 19 in Las Vegas—may not be the last word in this scandal-riddled campaign.

Even before it started, Trump had steered the second of three debates against Clinton straight into the gutter, producing for online delectation a panel of women who claimed to have been victimized sexually by Clinton’s husband, the 42nd president, or procedurally and publicly by the former secretary of state herself.

“Mr. Trump may have said some bad words, but Bill Clinton raped me and Hillary Clinton threatened me,” said one of the accusers, Juanita Broaddrick, repeating a longstanding indictment that never has been proven in court. Trump’s sideshow—conducted for a handful of reporters whose questions were ignored—was performed 90 minutes before a group of selected “uncommitted St. Louis-area independent” interrogators were to convene the candidates’ formal debate.

Billed as a “town hall,” the affair quickly became the territory of a tense and hostile village, population two.

Trump, who has turned the 2016 campaign into a cross between The Jerry Springer Show and a fistfight in the Taiwanese parliament, lashed into Clinton for her alleged mishandling of tens of thousands of State Department and personal emails, some of which may have contained classified information. And he ripped her statement—on the leaked audio of one of her myriad, highly paid speeches to a gathering of Wall Street moneybags—that “you need both a public and a private position” on some issues to be successful in Washington.

Clinton hedged that she was referring to Abraham Lincoln’s tactics in sloughing the emancipation of slavery through a recalcitrant Congress.

“She lied and she’s blaming the lie on the late, great Abraham Lincoln,” Trump announced, looking pleased with himself. “Honest Abe never lied. That’s this big, big difference between Abraham Lincoln and you.”

(Mark Twain again: “Never argue with stupid people. They will drag you down to their level and then beat you with experience.”)

The debate was nearly an hour old before Clinton demanded the release of Trump’s tax returns, a subject on which she had harped incessantly in their previous one-on-one on Long Island, two weeks earlier. This time, the tycoon seemed to admit to the reporting by The New York Times that he had not paid any federal tax for as long as 18 years while writing off gargantuan losses.

“He lives in an alternative reality,” Clinton said.

As an exemplar of American democracy in its 229th year, the debate—and the campaign itself—had itself become so unreal that even the Italian corporation that makes Tic Tac breath mints felt compelled to abjure as “inappropriate and unacceptable” Trump’s statement that he liked to chew a handful before locking lips with a total stranger.

“Crooked Hillary and the media are out to DESTROY our movement during tonight’s debate,” Trump’s campaign texted supporters earlier Sunday evening.

With 435 members of Congress, 34 United States senators, and thousands of governors, legislators, commissioners, aldermen, county clerks and dogcatchers from the Outer Banks to the Aleutians also on the ballot on Nov. 8—and with early voting already having begun in many jurisdictions nationwide—the Republican Party was in utter disarray as debate day dawned.

Raising funds in Chicago for Democratic candidates, President Barack Obama observed of Trump, without naming him, “It tells you that he’s insecure enough that he pumps himself up by putting other people down.”

Running-mate Mike Pence, governor of Indiana, declared himself “offended … as a husband and father,” Sen. John McCain announced that it now was “impossible to offer even conditional support,” and actor Robert De Niro was inspired to muse: “I’d like to punch Trump in the face.”

Kelly Ayotte—an imperilled U.S. senator from New Hampshire—after saying barely a week earlier that she “absolutely” would hold up Trump as a role model for children said, “I’m a mom and an American first, and I cannot and will not support a candidate for president who brags about degrading and assaulting women.”

This was a sentiment shared by countless other Republicans, all of whom had continued to support Trump’s candidacy despite his fat-shaming of a Miss Universe pageant winner, his brouhaha with the family of a Muslim-American infantryman who was killed in combat in Iraq, and his approval of Howard Stern’s observation that daughter Ivanka is “a piece of ass.”

Despite it all, a poll by Politico taken before the debate showed only 40 per cent of likely voters calling for Trump to abandon the Republican nomination, while 45 per cent said that he should persevere.

Or, as Richard Nixon said as the Watergate scandal dragged him under in 1973, “Despite all the polls and the rest, I think there’s still a hell of a lot of people out there, and from what I’ve seen … they want to believe.”