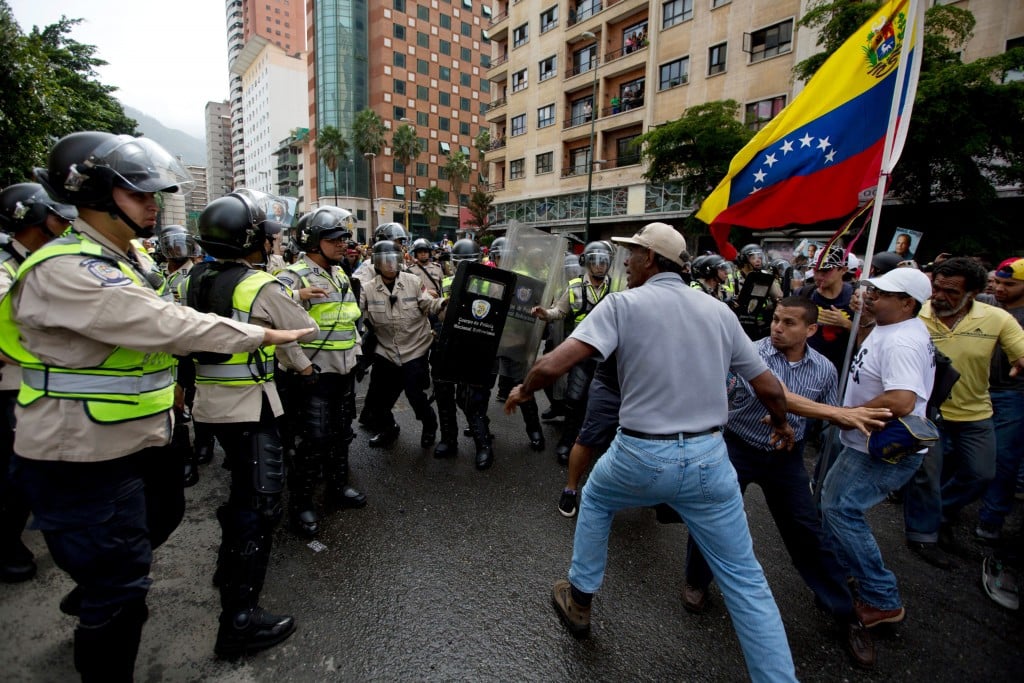 Anti-government demonstrators try to break through a barrier of Bolivarian National Police in an effort to reach the headquarters of the national electoral body, CNE, in Caracas, Venezuela, Wednesday, May 18, 2016. The opposition was blocked from marching to the CNE to demand the government allow it to pursue a recall referendum against Venezuela’s President Nicolas Maduro. (AP Photo/Fernando Llano)

The anti-government protest was the third in a week, and came days after the socialist president declared a state of emergency in the economically struggling country. He gave himself decree powers for 60 days.

Thousands of people turned out for the march in downtown Caracas, but police blocked the route. A small group tried to break through and was turned back by tear gas.

“If Maduro wants to apply this decree, he needs to start preparing tanks and warplanes, because he’ll have to apply it by force,” Capriles said.

The president went on television later in the day to criticize his opponents, including the opposition-controlled legislature. He said he would use the decree powers to take away congress’ control of the budget.

Maduro said he would keep the decree powers in effect through the rest of the year so opposition legislations “are not going to sabotage me on the budget.”

Government opponents also protested in other parts of the country, and as darkness fell people leaned out their windows in major cities to bang pots to show their anger. Human rights groups said more than 50 people were injured in the protests nationwide.

The opposition roiled the country with bloody nationwide protests in 2014, but protests have tended to be small and peaceful since then.

A majority of the country wants Maduro out, according to opinion polls. Venezuelans overwhelmingly voted for the opposition in congressional elections in December, but state institutions have blocked the opposition-controlled congress from passing any legislation.

With congress unable to push through legislation, opposition leaders have begun turning their attention to the streets and the recall referendum as their best option to exert political pressure.

Opponents of the Maduro administration abroad have been asking the Organization of American States to pressure Venezuela to allow the opposition more space in the political arena. Maduro responded by calling OAS Secretary General Luis Almagro a tool of the CIA.

On Wednesday, Almagro called that claim absurd and said he would not be threatened. “I am not a CIA agent. And your lie, even if it is repeated a thousand times, will never be true,” he wrote in an open letter to Maduro.