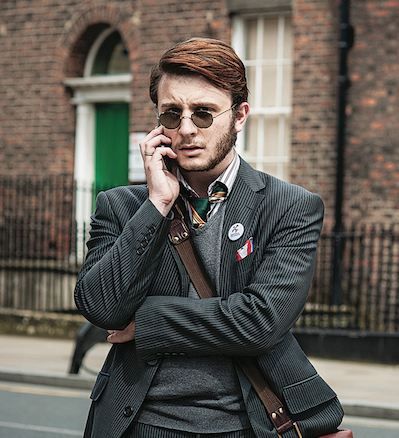 He’s an unlikely far-right trailblazer: neither old, nor angry, nor square. Jack Buckby, the 20-year-old founder of the National Culturists—a Tea Party-inspired youth movement that aims to reinvigorate Britain’s flagging far right—pairs John Lennon glasses with modish ties and ironic facial hair. He’s well-spoken. He blogs. He’s already a darling of the radical British National Party (BNP), which campaigns on the premise that immigration has put British culture in peril, and has plans to spread the word to campuses nationwide.

His political awakening occurred, he says, after realizing that “if you disagree with multiculturalism, you are deemed a racist.” Frustrated, Buckby came across the work of John Press, founder of the Brooklyn Tea Party. Press argues that “traditional majority culture” should be promoted over diversity, which, he feels, embraces “practices such as female genital mutilation and drug-running gangster culture.” In 2011, Buckby, who is partway through a political science degree at the University of Liverpool, founded the National Culturists. “We don’t have aspirations to be a street movement,” he says. “We want to be an academic organization.”

That may be just what Britain’s far-right needs: in 2009, a street movement known as the English Defence League attracted hordes of supporters to its anti-Muslim marches. But the group’s window-smashing, proto-fascist song-chanting members also alienated social conservatives.

Lately, anti-immigrant parties like the BNP and the anti-EU U.K. Independence Party have been shedding support to Prime Minister David Cameron’s Conservatives, who are tightening up immigration laws. (The 44 councillors elected to represent the BNP in 2006 have dwindled to just three, and the party’s national support barely tops two per cent.) Even the Labour Party seemed to be courting nationalists, with its 2012 call to subject some public sector employees to English proficiency tests.

Buckby isn’t threatening to smash windows over Islam; he markets himself as a small-c conservative who is simply battling “namby-pamby” political correctness. His supporters insist he is drawing attention to real problems, like the presence of unofficial sharia courts in Britain. His views, however, appear to be in line with the facepaint-wearing Islamophobes: Buckby wants to bar Muslim immigrants from entering Britain and ban British Muslims from protesting. He wants to teach schoolchildren that Muslims hate gay people and, bizarrely, holds Muslims responsible for pedophilia in Britain.

Buckby’s campus events are sometimes broken up by rowdy “anti-fascists.” While campaigning, he travels with a bouncer for safety. Even his home isn’t free of political fights. His parents, he admits, after a long “umm,” aren’t on the “same wavelength.”