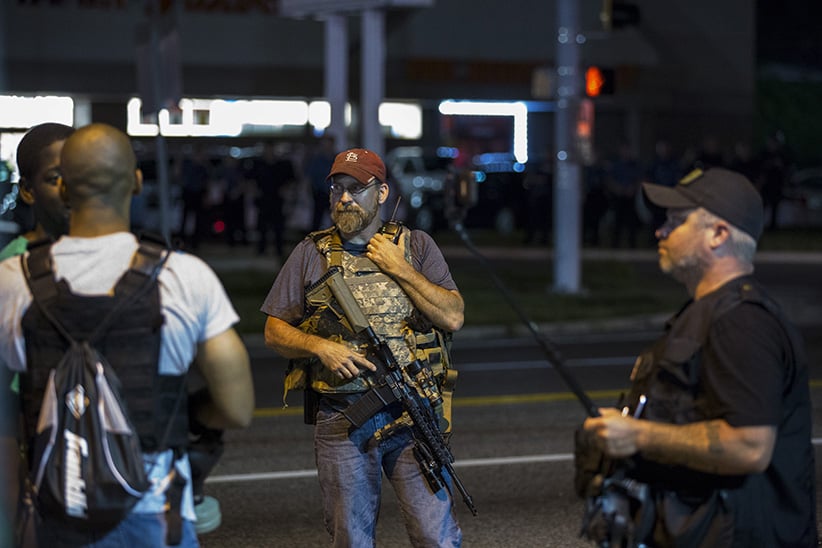 Members of the Oath Keepers walk with their personal weapons on the street during protests in Ferguson, Missouri August 11, 2015. Police in riot gear clashed with protesters who had gathered in the streets of Ferguson early on Tuesday to mark the anniversary of the police shooting of an unarmed black teen whose death sparked a national outcry over race relations. (Lucas Jackson/Reuters)

FERGUSON, Mo. — The return of an armed militia group patrolling the streets of Ferguson drew criticism Tuesday from both protesters and the county police chief overseeing security amid ongoing demonstrations marking the anniversary of 18-year-old Michael Brown’s shooting death.

St. Louis County Police Chief Jon Belmar said the overnight presence of the Oath Keepers, wearing camouflage bulletproof vests and openly carrying rifles and pistols on West Florissant Avenue, the hub of marches and protests for the past several days, was “both unnecessary and inflammatory.”

The St. Louis suburb was the focus of months of massive protests and sometimes violent unrest last summer after the killing of Brown by a white Ferguson police officer, which sparked a nationwide protest movement and a fierce debate over how police treat minorities.

Belmar plans to ask county prosecutor Bob McCulloch about the legality of armed patrols by the far-right anti-government activist group, which largely comprises past and present members of the military, first responders and police officers. But Missouri law allows anyone with a concealed carry permit to openly display a firearm anywhere in the state.

John Karriman, a representative of the group who has taught at the Missouri Southern State University police academy and ran unsuccessfully as a Libertarian Party candidate for county sheriff in southwest Missouri, did not immediately respond to a cellphone message seeking comment. The group’s membership co-ordinator referred an inquiry to founder Stewart Rhodes, who studied constitutional law at Yale University.

Oath Keepers previously showed up in Ferguson in November after a grand jury declined to indict former Ferguson officer Darren Wilson in Brown’s death, saying they stationed themselves along several downtown rooftops to protect businesses from rioting and looters.

County police ordered them to leave then, but group members intermittently returned. About a half-dozen Oath Keepers, all of whom appeared to be white, interacted freely with police late Monday and early Tuesday but endured catcalls and jeers from demonstrators.

Protest organizer Nabeehah Azeez called the presence of the armed men “a contradiction in how things work.”

“The rules don’t apply to everyone,” she said. “If those were black men walking around with rifles, they probably wouldn’t be living today.”