At least 15 killed, another 20 injured in knife attack near Tokyo

Police have arrested the suspect after he turned himself in 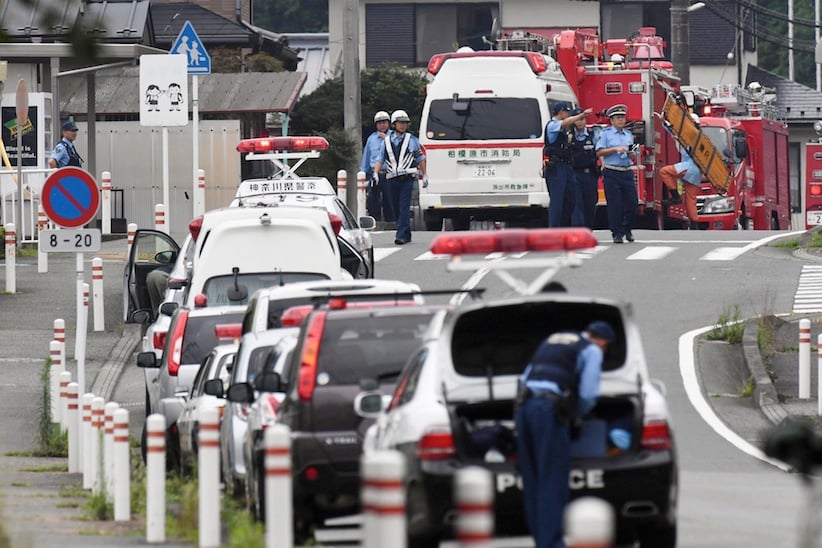 Police officers stand by with ambulances and firetrucks seen on a street near a facility for the handicapped where a number of people were killed and dozens injured in a knife attack Tuesday, July 26, 2016, in Sagamihara, outside Tokyo. (Kyodo News via AP)

TOKYO — Fifteen people were killed and at least 20 wounded in a knife attack Tuesday at a facility for the handicapped in a city just west of Tokyo in a rare case of mass violence in Japan, according to Japanese media reports.

Police said they responded to a call about 2:30 a.m. from an employee saying something horrible is happening at the facility in the city of Sagamihara.

A man turned himself in at a police station about two hours later, police in Sagamihara said. He left the knife in his car when he entered the station. He has been arrested on suspicion of attempted murder and trespassing.

Police said there were several casualties but did not provide any numbers.

Japan’s national broadcaster NHK reported the suspect, 26, is a former employee at the facility, Tsukui Yamayuri-en. NHK said 15 people were killed and 20 were wounded.

Television footage showed a number of ambulances parked outside the facility, with medical and other rescue workers running in and out.

Mass killings are relatively rare in Japan, which has extremely strict gun-control laws. In 2008, seven people were killed by a man who slammed a truck into a crowd of people in central Tokyo’s Akihabara electronics district and then stabbed passers-by.

Fourteen were injured in 2010 by an unemployed man who stabbed and beat up passengers on two public buses outside a Japanese train station in Ibaraki Prefecture, about 25 miles (40 kilometres) northeast of Tokyo.

There was still some confusion of the number of casualties in the latest incident, with Kyodo News agency initially reporting that 19 people were killed and 20 injured, but later said at least 15 people were dead and 28 injured.