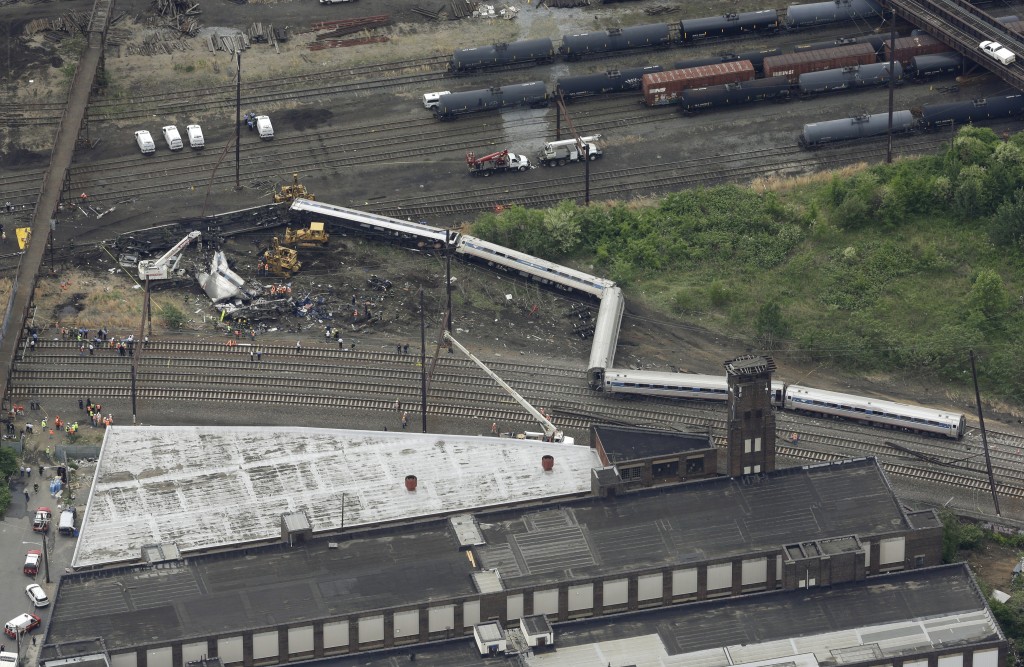 In this aerial photo, emergency personnel work at the scene of a passenger train wreck in Philadelphia on Wednesday, May 13, 2015. (Patrick Semansky/AP)

PHILADELPHIA — The Amtrak train that crashed in Philadelphia, killing at least seven people, was hurtling at 106 mph before it ran off the rails along a sharp curve where the speed limit is just 50 mph, federal investigators said Wednesday.

The engineer at the controls applied the emergency brakes moments before the deadly crash but managed to slow the train to only 102 mph when the locomotive’s black box stopped recording data, said Robert Sumwalt of the National Transportation Safety Board. The speed limit just ahead of the bend is 80 mph, he said.

The engineer, who name was not released, refused to give a statement to law enforcement Wednesday and left a police precinct with a lawyer. Sumwalt said federal accident investigators hope to interview him but will give him a day or two to recover from the “traumatic event.”

“Our mission is to find out not only what happened but why it happened, so that we can prevent it from happening again,” Sumwalt said.

More than 200 people aboard the Washington-to-New York train were injured in the wreck, which took place in a decayed industrial neighbourhood not far from the Delaware River shortly after 9 p.m. Tuesday. It was the nation’s deadliest train accident in nearly seven years.

“We are heartbroken by what has happened here,” Mayor Michael Nutter said.

Amtrak suspended all service until further notice along the Philadelphia-to-New York stretch of the nation’s busiest rail corridor — forcing thousands of travellers to find some other way to reach their destination — as investigators examined the wreckage and the tracks and gathered up other evidence.

The dead included an AP employee and a midshipman at the U.S. Naval Academy. Many of the injured suffered from broken bones or burns. At least 10 remained hospitalized in critical condition.

Nutter said some people remained unaccounted for, though he cautioned that some passengers listed on the Amtrak manifest might not have boarded the train, while others might not have checked in with authorities.

“We will not cease our efforts until we go through every vehicle,” the mayor said in the afternoon. He said rescuers expanded the search area and used dogs to look for victims in case someone was thrown from the wreckage.

The NTSB finding about the train’s speed corroborated an Associated Press analysis done earlier in the day of surveillance video from a spot along the tracks. The AP concluded from the footage that the train was speeding at approximately 107 mph moments before it entered the curve.

Despite pressure from Congress and safety regulators, Amtrak had not installed along that section of track Positive Train Control, a technology that uses GPS, wireless radio and computers to prevent trains from going over the speed limit, the railroad agency said.

Most of Amtrak’s Northeast Corridor is equipped with Positive Train Control.

“Had such a system been installed in this section of track, this accident would not have occurred,” Sumwalt said.

The notoriously tight curve is not far from the site of the site of one of the deadliest train wrecks in U.S. history: the 1943 derailment of the Congressional Limited, bound from Washington to New York. Seventy-nine people were killed.

Amtrak inspected the stretch of track on Tuesday, just hours before the accident, and found no defects, according to the Federal Railroad Administration. In addition to the data recorder, the train had a video camera in its front end that could yield clues to what happened, said NTSB member Robert Sumwalt.

Passengers scrambled through the windows of torn and toppled cars to escape. One of the seven cars was severely mangled.

Jillian Jorgensen, 27, was seated in the second passenger car and said the train was going “fast enough for me to be worried” when it began to lurch to the right. Then the lights went out and Jorgensen was thrown from her seat.

She said she “flew across the train” and landed under some seats that had apparently broken loose from the floor.

Jorgensen, a reporter for The New York Observer who lives in Jersey City, New Jersey, said she wriggled free as fellow passengers screamed. She saw one man lying still, his face covered in blood, and a woman with a broken leg.

She climbed out an emergency exit window, and a firefighter helped her down a ladder to safety.

“It was terrifying and awful, and as it was happening it just did not feel like the kind of thing you could walk away from, so I feel very lucky,” Jorgensen said in an email to the AP. “The scene in the car I was in was total disarray, and people were clearly in a great deal of pain.”

Several people, including one man complaining of neck pain, were rolled away on stretchers. Others wobbled as they walked away or were put on buses.

“It’s incredible that so many people walked away from that scene last night. I saw people on this street behind us walking off of that train. I don’t know how that happened, but for the grace of God,” Nutter said.

The area where the wreck happened is known as Frankford Junction, situated in a neighbourhood of warehouses, industrial buildings and homes.

Amtrak carries 11.6 million passengers a year along its busy Northeast Corridor, which runs between Washington and Boston.