Avalanche and blizzard in Nepal kill 12, including 4 Canadians 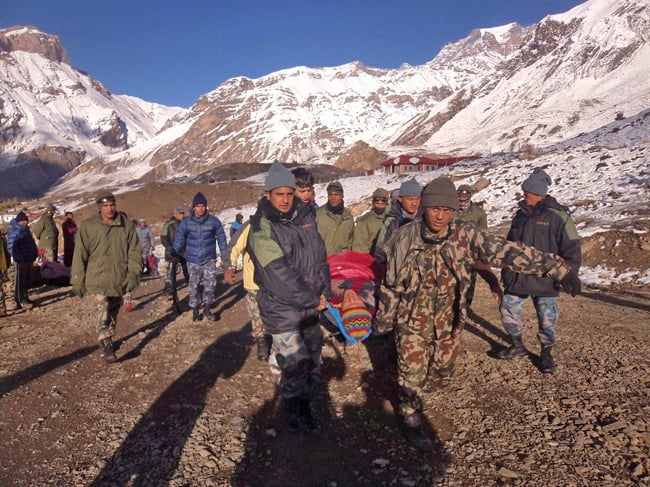 In this photo provided by the Nepalese army, soldiers carry an avalanche victim before he is airlifted in Thorong La pass area, Nepal, Wednesday, Oct. 15, 2014. (Nepalese Army/AP/CP)

KATHMANDU, Nepal – Officials say an avalanche and a blizzard in Nepal’s mountainous north have killed at least 12 people, including four Canadians.

A statement from the Trekking Agencies’ Association of Nepal says the bodies of five people — four Canadians and one Indian trekker — have been recovered from Phu area in Manang district.

A woman who answered the phone at a Montreal-based travel agency today said three of the people who disappeared booked their trips through them.

The woman at Terra Ultima, which books high-altitude hiking trips, says the agency is in contact with family members. She did not confirm a report the three were from Quebec.

Panorama Himalaya also said it had rescued three other Canadian trekkers, according to the Trekking Agencies’ Association of Nepal.

The death toll was likely to rise as rescuers struggled through snow and rough terrain to help dozens who remained stranded, the officials said.

“Laureen and I express our condolences to the families and friends of the four Canadians who lost their lives in an avalanche in Nepal,” he wrote.

Three villagers were killed Monday in the same district, about 160 kilometres northwest of the capital, Kathmandu, and their bodies were recovered on Wednesday.

In the neighbouring Mustang district, four trekkers caught in a blizzard died Tuesday.

Rescuers recovered the bodies of the two Poles, one Israeli and one Nepali trekker from the Thorong La pass area.

He said another 14 foreign trekkers have been rescued so far, and two army helicopters were picking up injured trekkers and flying them to Jomsom town.

Chokyal said it was not possible to say how many trekkers were still on the route stranded by the deep snow but several of them have reached safe ground on Wednesday because of improved weather.

Five other climbers — two from Slovakia and three Nepalese guides — were hit by a separate avalanche on Mount Dhaulagiri and remained missing.

The rain and snow in Nepal were caused by a cyclone that hit neighbouring India several days ago.

October is the most popular trekking season in Nepal, with thousands of foreigners hiking around Nepal’s Himalayan mountains.

The Thorong La pass is also on the route that circles Mount Annapurna, the world’s 10th highest peak.

An avalanche in April just above the base camp on Mount Everest killed 16 Nepalese guides, the deadliest single disaster on the mountain.