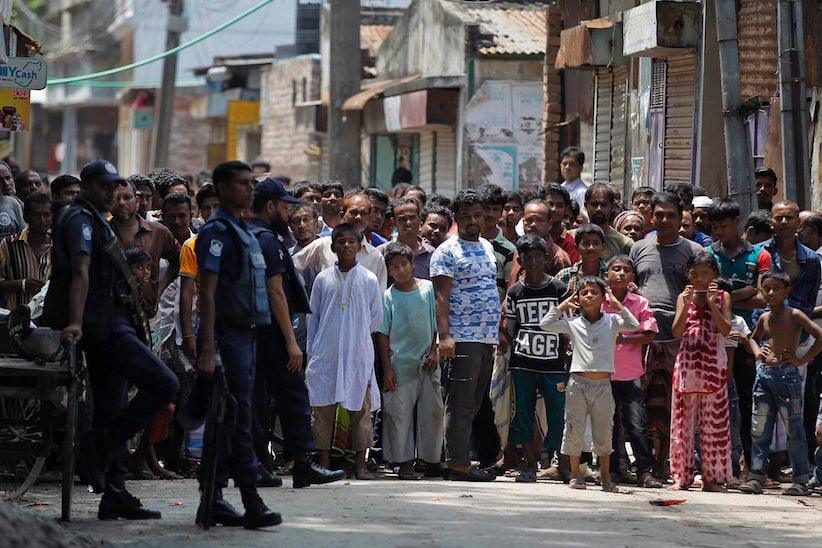 Bangladeshis gather near a shooting scene in Narayanganj, outskirts of Dhaka, Saturday, Aug. 27, 2016. Police in Bangladesh say they have killed three suspected militants, including Tamim Chowdhury, a Bangladeshi-born Canadian, who police believe was one of two masterminds of the attack on a popular restaurant in Dhaka. (AP Photo)

Tamim Chowdhury was among three suspected militants killed by police near Bangladesh’s capital on Saturday. Bangladeshi police allege Chowdhury, who lived in Windsor, Ont., was one of two masterminds of the July 1 attack on a popular restaurant in Dhaka that left 20 people dead.

The Islamic State of Iraq and the Levant claimed responsibility for the restaurant attack, but authorities have denied the claim. They say it was the act of the banned group Jumatul Mujahedeen Bangladesh, or JMB, and that ISIL has no presence in the Muslim-majority country.

A spokeswoman for Foreign Affairs Minister Stephane Dion said the government was aware of news reports that Chowdhury had been killed, and that Canadian officials were in contact with Bangladeshi authorities.

Little is known about Chowdhury. The Dhaka Tribune, citing Bangladeshi police, said Chowdhury arrived from Canada in 2013 to re-organize the JMB. It said his grandfather opposed Bangladesh’s independence from Pakistan in 1971, and that the family moved to Canada later that year.

Md. Abdul Quaiyum, president of the Bangladesh Canada Association of Windsor Essex, said the Chowdhury family was known in the community, though not very well. He said he had not spoken to Chowdhury’s parents since news of their son’s death.

Quaiyum said there are about 1,000 Bangladeshi-Canadians in Windsor. He said many are engineers or other professionals who are hardworking and peaceful, and that the community condemns the type of violence that police have accused Chowdhury of.

“The Bangladeshi community here condemns this, we hate this, and we don’t like this,” he said.

Other leaders from Canada’s 100,000-strong Bangladeshi community had similar reactions.

Abul Hossain, former president of the Bangladeshi Community Association of Saskatchewan, said the entire community was talking about and upset about Chowdhury’s case.

“It’s a shame,” he said. “People are very much feeling shame.”

Mohammed Ali, president of the Bangladesh Association of Hamilton, said he was angry. “This guy was against Bangladesh,” Ali said. “We don’t support terrorism anywhere, anyway. No Canadian, no human can support these things.”

The Windsor Islamic Council, which has previously confirmed that Chowdhury was from the city, posted a statement on its website Saturday saying it had no knowledge of his background. The statement went on to say that the council had adopted a policy of not discussing “the lives of violent extremists.”

“This policy stems from deep conviction that talking about the lives of such individuals only dignifies their heinous acts and serves their twisted quest for fame,” the statement said.

“We do not only condemn and reject all forms of violence in the name of our noble faith, but renew our commitment and determination to expose the criminal and anti-Islamic nature of extremism and terrorism.”

Chowdhury is also suspected to be behind a July 7 attack on an Eid gathering outside Dhaka marking the end of the Muslim holy month of Ramadan, Bangladesh authorities said. Four people died in that attack, including two police officers.

The Bangladeshi investigation into the attack involves another connection to Canada. Police arrested Tahmid Hasib Khan, a University of Toronto student earlier this month. His family said Khan, 22, has been moved to a prison. They have steadfastly maintained his innocence.