With the DEA and the CIA often working at cross-purposes, observers say it's a war that can't be won 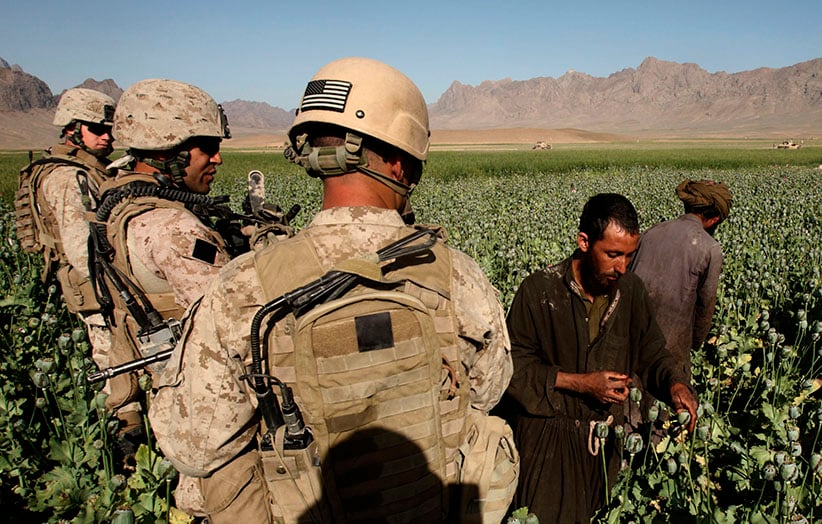 When Amy Oljey was 24 years old, she was living with her parents in Easton, Mass., and studying to become a medical assistant. Her life was normal, for a suburban upper-middle-class American. All things exciting were reserved for weekend nights partying in downtown Boston, 45 km to the north.

Easton, an old-school New England town settled in 1694, is about as apple pie as it gets: largely white, with an above-average median family income, and historical sites like the Old Colony Railroad Station.

This was where, in 2009, Oljey’s journey to hell began. “It was a car accident that started it all,” she says. “I was badly injured and ended up on pain medication, which eventually led to a heroin addiction. After that, my life basically fell apart.” In very short succession, Oljey dropped out of school, left her family home, and now scrapes by on food stamps and homeless shelters, constantly trying to chase the dragon of addiction.

Her story is not atypical. The tragedy of Oljey’s life is interwoven with a series of alarming trends in America. First and foremost is opioid addiction: America is in a crisis. Over the past 15 years, opioid overdoses, including heroin, have skyrocketed. In Massachusetts alone, people are dying in record numbers, at a rate of nearly three a day. Many more are getting hooked, often following the same pattern as Oljey’s

“It was too easy,” she says. “When I was in the hospital recovering from my injuries, they kept me pumped up on painkillers. When I left the hospital, I was given more. They basically med-ed me up without any warnings of the consequences, and when they realized I was hooked, they just cut me off.”

Opioid overdoses have overtaken automobile accidents as the No. 1 cause of accidental deaths in the U.S. According to the Centers for Disease Control and Prevention, heroin overdoses shot up more than 400 per cent from 2001 to 2013, a date range that perfectly coincides with the rise of opium cultivation in Afghanistan.

Afghan heroin now represents more than 80 per cent of the world’s supply, while the land used for growing opium poppies in Afghanistan has also more than quadrupled, from less than 50,000 hectares in early 2001 to more than 200,000 hectares in 2013, according to figures provided by the United Nations Office on Drugs and Crime.

Plotting the rise in Afghan opium production since 2001 and comparing it to opioid overdoses in Massachusetts over the same time period shows an almost perfect overlap. Afghan opium has flooded the world market with cheap, high-grade heroin, and it is killing people across America at a startling rate.

Mary Carlin knows the dangers well. The 27-year-old recovering addict has overdosed six times in her short life. “The first time was around 2008, at a party,” she says. “Around that time, the word on the street was that heroin was getting really strong.” Carlin, clean for six years, is now an intern at Stairway to Recovery, a support centre for addicts in Brockton, Mass., run entirely by former users.

Her addiction—which started in high school in 2002, when she was just 14, with the prescription pain medication oxycontin, before quickly escalating to heroin—came at a time when the perfect storm was beginning to form for a heroin crisis. The 2001 U.S.-led invasion of Afghanistan, ironically, opened the doors to the resurgent opium trade, which the hardline Taliban regime had all but eradicated. When the Taliban fell, farmers who had depended on the cash crop for their survival were free to begin cultivation once again. The world’s heroin landscape shifted dramatically: The glut that Afghan heroin created on the international market forced prices down, while the street value of prescription medications, conversely, went up or remained steady.

Lt. Patrick Glynn, the head of the special investigations unit in the Boston suburb of Quincy, points out that his division has shut down numerous “pill mills,” reducing the illicit pharmaceutical supply. But tackling the heroin problem is a much bigger issue. “On the supply side, it’s like playing whack-a-mole,” says the veteran police officer. “We can’t fight the supply anymore. We have to work on the demand. That’s my job: educating young people on the dangers of opioids, getting users into treatment rather than throwing them in jail. The old approach of the war on drugs is not working.”

Late last month, U.S. President Barack Obama announced a national initiative to try to address the crisis. “We should approach substance abuse as an opportunity to intervene, not incarcerate,” he said during a speech in West Virginia, the worst-hit state, with a drug overdose rate twice the national average. His plan calls for improving training for prescribers of opiate-based painkillers, as well as opening up access to medication-assisted treatment for addicts.

But some critics argue that, while the proposed reforms are needed, they will not be enough, given the high-grade heroin flooding U.S. streets. “This is going to take a comprehensive effort,” says Glynn of the global effort to tackle the drug trade. “We can get somewhere if we’re on the same mission. If we don’t collaborate, we will perish.”

According to some former officers from the Drug Enforcement Administration (DEA), co-operation among law enforcement and security agencies, particularly the CIA, is sorely lacking. “Almost everywhere in the world I worked, I had static with the CIA,” Edward Follis, a former DEA agent who worked in Afghanistan, wrote in his 2014 book The Dark Art: My Undercover Life in Global Narco-Terrorism. “We’re often working the same terrain, but with different legal and moral parameters . . . They [the CIA] exist completely in the shadows.”

Michael Levine, another former DEA agent who spent years during the 1970s and 1980s under deep cover, infiltrating some of the world’s most dangerous drug-trafficking rings, is more direct: “The DEA and the CIA are at cross-purposes,” he told Maclean’s by telephone. “We try to put these guys in cages; they protect them for political purposes.”

In Afghanistan, former warlords, now turned politicians, control much of the international drug trade. In one documented case, Ahmed Wali Karzai, the brother of former president Hamid Karzai, was implicated in heroin trafficking. According to a 2008 New York Times report, the CIA station chief at the time met with the president and asked him to move his brother out of the country. The request was denied. In the same report, senior DEA officials reportedly complained that “the White House favoured a hands-off approach toward Ahmed Wali Karzai because of the political delicacy of the matter.” White House officials denied the allegations.

Current DEA officials refuse to comment on the allegations, but insist that the heroin entering the U.S. is primarily produced south of the border. “The vast majority of heroin in New England is from Mexico and Colombia, South America,” says special agent Timothy Desmond at the DEA’s New England office. “It is shipped through Mexico into the U.S. across the southwest border. This past year, poppy production in Mexico increased by 50 per cent.”

Both Levine and Glynn disagree, arguing that, in all likelihood, Afghan heroin is reaching the U.S. through Mexico. Recent investigations conducted by the Autonomous Technological Institute of Mexico appear to support their case, pointing to a deepening relationship between Mexican cartels and smuggling networks in Turkey and India.

Critics of U.S. drug policy in Afghanistan argue that efforts to bring opium production in Afghanistan under control have failed, because those efforts have been hampered by a reluctance to go after the key players, who also happen to be Afghanistan’s power brokers and, in many cases, former CIA assets.

The consequences are being felt thousands of kilometres away, on the streets of American towns and cities. Glynn has seen the effects first-hand. “Fentanyl is now becoming a major issue for us,” he says, referring to the deadly synthetic opioid, which has also become a fatal problem in Canada. “We used to see heroin cut with fentanyl, but now, because heroin is so cheap, we’re seeing fentanyl cut with heroin. But the heroin itself is the purest we’ve ever seen. That makes for a deadly combination.”

At Stairway to Recovery, former addicts all nod their heads in agreement. “Addicts are always chasing a better high,” says Efrain Baez, Stairway to Recovery’s program director, and a former heroin addict. “If something more powerful shows up on the street, they will use it. And they will eventually die.”