Bavaria = Quebec + Alberta. Could it go it alone?

A new, controversial book argues it should.

BAD KREUZNACH, GERMANY — It’s a unique region of the country—home to a people with a separate and distinct historical, linguistic, social and political culture that often puts it at odds with the rest of the country.

The region occupies about 20 per cent of the whole country. The people—about 12.5 million of them—are a minority overall but form a regional majority and consider themselves masters in their own house.

They have their own pop stars, media celebrities and a thriving film and television industry. But if other citizens of the same country want to watch their movies, subtitles are often necessary.

It’s a region that has its own political agenda—one that is often in conflict with the larger national agenda—and a strong, persistent body of opinion that believes the region and its people would fare better as a separate, independent nation.

It’s not Quebec (but you knew that already, didn’t you?), not even Scotland.

The Bavarian separatist movement is small compared to the Quebec sovereignty movement, but it’s real and the issues it espouses touch raw nerves of both Bavarians and non-Bavarian Germans.

Those nerves have been pressed in recent weeks by the publication of a best-selling (in Germany) book calling for the independence of Bavaria from the double yoke of bondage to both the federal German government in Berlin and the larger European Union headquartered in Brussels.

Bayern kann es auch allein (roughly translated as Bavaria Can Also Go It Alone), is a 191-page polemic covering a range of standard Bavarian complaints about the present German (and European) political order and a paen to the benefits and glories that await an unfettered Free State of Bavaria.

Scharnagl was a longtime confidante and close advisor to Franz Josef Strauss, the controversial and powerful leader of the CSU from the 1960s to his death in 1988. Strauss was the unchallenged master of Bavaria during that time and built the once-impoverished state into the economic powerhouse it is today.

As such, Scharnagl’s call for an independent Bavaria is much like a top lieutenant of former premier Peter Lougheed urging the secession of Alberta from Canada.

And when Scharnagl launched his book (in Berlin, of all places) three weeks ago, the audience was filled with other old-guard members of the CSU leadership—a clear sign that Scharnagl’s disenchantment with the German federation is not an isolated case of rebellion.

“Bavaria does not have the place in the world, the rank and the role that would be appropriate because of its history, size and population,” Scharnagl told his audience, to a round of applause.

In many ways, Bavaria is Germany’s equivalent of both Alberta and Quebec. It’s a distinct society with a well-polished sense of its uniqueness from the rest of the country, but it’s also the self-aware economic engine of the whole country and resents supporting the ungrateful have-not relatives.

Bavaria’s economic clout is based not on natural resources but on vibrant industrial and financial sectors. Bavaria and especially its capital, Munich (München in Deutschland, of course), are home to auto makers BMW and Audi, tech and engineering companies like Siemens and Grundig, sports gear manufacturers Adidas and Puma, as well as strong media, publishing, fashion and international finance sectors.

Even while some of Europe’s national economies are imploding and other regions of Germany are stagnant, the Bavarian economy is chugging along—and the unemployed of Europe flock there by the thousands for jobs.

And with the economic output comes financial outlay for Bavaria—both to the rest of Germany in regional equalization payments and to the rest of Europe. Scharnagl calls it “double oppression.” Not surprisingly, Bavaria’s CDU politicians are the most strident opponents of any further bailouts for Greece and other cash-strapped EU members.

Within Germany, four “have” states pay about $9 billion a year in Länderfinanzausgleich (fiscal equalization) transfers to 12 “have-not” states. As the richest state, Bavaria pays about half that annual tab. And resents it.

(In comparison, Canadian equalization payments will total about $15.4 billion in the 2012-13 fiscal year. Quebec will receive the lion’s share—$7.39 billion—and Alberta will dole out the lion’s share.)

Calling the situation “unfair,” the Bavarian state government launched a court challenge in July to the equalization transfer payments. With Bavarian state elections scheduled for 2013, the court action is seen primarily as a populist pre-election gambit on the part of the ruling CSU—but it’s not all about politics.

If Bavaria were to go its own way, its $550-billion annual GDP would make it the seventh largest economy in Europe and among the top 20 in the world, Scharnagl argues.

And Bavaria’s sense of distinctness is not all about money, either.

On the language front, almost every Bavarian speaks “standard” German, but use of the much-different regional dialect—Bairisch—is common in personal conversation. A North German trying to understand a conversation in Bairisch is (I’m told) like a unilingual English speaker trying to understand a conversation in French: One can pick out familiar words but much of what is said is incomprehensible. Then there are Bavaria’s Swabian and Franconian speakers, but why complicate matters.

Despite its economic surge, Bavaria still carries a (fading) reputation as a bucolic pastureland filled with country bumpkins. The term “laptops and lederhosen” has been coined to describe Bavaria’s swirling cultural mixture of new economies and old traditions.

“Much of the rest of the country … regards this wealthy southern colossus with a mixture of bemusement, derision and loathing,” Siobhan Dowling wrote in the English-language edition of Der Spiegel in March 2009.

“Bavarians are weird,” a North German friend confided recently. “But then they think Northerners are weird, too.”

Such regional resentments are understandable.

Despite its long and tangled history, Germany as a unified political state is younger than Canada. It wasn’t until 1871 that Otto von Bismarck dragged the southern tier of independent German principalities—including the Kingdom of Bavaria—into a powerful German Empire under Prussian leadership.

Scharnagl cites the contemporaneous reaction of Prince Otto of Bavaria—who attended the unification ceremony on behalf of his brother the king—to the loss of their realm’s independence:

“What a mournful impression it made on me to see our Bavaria bow before the emperor … My heart wanted to burst. It was all so cold, so proud, so shiny, so showy and ostentatious and heartless and empty.”

That sense of lost autonomy still resonates in Bavaria today. So it’s not surprising that Scharnagl’s call for independence would find a receptive audience.

Bavaria has had a full-fledged separatist party—called the Bayernpartei (Bavaria Party), of course—since the creation of the Federal Republic of Germany in the 1940s. With only about 5,000 members, it barely makes a dent at elections.

The party did, however, get a lot of attention during European parliamentary elections in 2009 when it mounted a national advertising campaign based in large part on the supposed animosity felt by other parts of Germany toward Bavaria.

The key component of the campaign was a poster showing a couple dressed in traditional Bavarian lederhosen shorts and dirndl dress waving goodbye as they walked away. 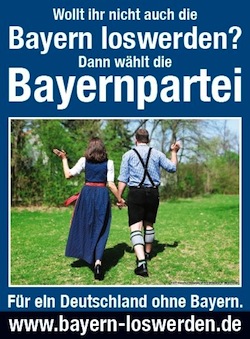 The poster’s tagline was: “Don’t you want to get rid of the Bavarians? Then vote for the Bavaria Party—for a Germany without Bavaria.”

The poster sent voters to an accompanying website that listed all the Bavarian traits that supposedly annoy other Germans—their arrogance, “senseless jabbering,” “pointless mountains and boring lakes”—and asked voters across Germany to vote for the BP “to kick Bavaria out.”

The campaign got a lot of knowing chuckles—but not enough votes to send a single Bavarian separatist to the European Parliament in that election.

Now, with the serious mainstream attention attached to the release of Wilfried Scharnagl’s new book, the Bavarian state government’s rebellion against equalization payments and a growing sense that everyone has their hands in Bavaria’s pockets, the Bavarian separatist movement may have more traction in upcoming elections.

A 2010 survey carried out by the Hanns Seidel Foundation and the GMS Institute found that 56 per cent of Bavarians polled did not want to become independent. Still, 56 per cent is not a ringing endorsement of anything.

“Maps are not set in stone for eternity,” Scharnagl writes in his book. “Who would have imagined, 25 years ago, that there would soon be a free Latvia, a free Estonia and a free Lithuania?”

Ironically most foreign stereotypes about Germany reflect Bavarian iconography: From fairytale castles framed by towering Alps to giant clangers of beer at Oktoberfest, from lederhosen to dirndl dresses, it’s all Bavarian. It’s hard to imagine Germany without Bavaria.

But it’s just as hard to imagine Canada without Quebec.