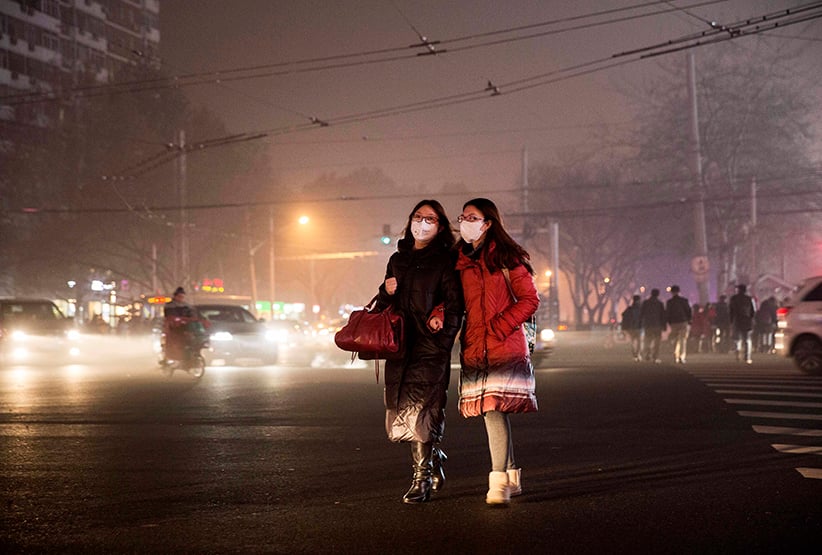 Chinese women wear masks as protection from the pollution as they cross a road on December 1, 2015 in Beijing, China. (Kevin Frayer/Getty Images)

Beijing issued its first-ever red alert for smog on Monday, urging schools to close and invoking restrictions on factories and traffic that will keep half of the city’s vehicles off the roads.

The red alert — the most serious warning on a four-tier system adopted a little over two years ago — means authorities have forecast more than three consecutive days of severe smog.

An online notice from the Beijing Municipal Environmental Protection Bureau said it issued the alert to “protect public health and reduce levels of heavy air pollution.”

“We have no choice but to step up preventative measures like wearing a mask outdoors at all times,” he said.

Readings of PM2.5 particles climbed toward 300 micrograms per cubic meter on Monday and are expected to continue rising before the air begins to improve with the arrival of a cold front on Thursday. The World Health Organization designates the safe level for the tiny, poisonous particles at 25.

Along with school closures and limiting cars to driving every other day depending on the last number of their license plate, a raft of other restrictions will seek to reduce the amount of dust and other particulate matter in the city of 22.5 million people. Officials said extra subway trains and buses would be added to handle the additional strain on public transport.

It’s the second time this month that notoriously polluted Beijing has experienced a prolonged bout of smog, sending PM2.5 levels in the suburbs as high as 976 micrograms. Beijing was also shrouded in persistent smog for most of November, when power demand soared due to unusually cold weather.

While pollution in the capital improved slightly in the first 10 months of the year, heavy smog that can be seen from outer space regularly forces Beijing schools to suspend outdoor activities and can even prompt highway closures because of reduced visibility.

“It is a sharp warning to us that we may have too much development at the price of environment and it is time for us to seriously deal with air pollution,” said Fan, the hotel employee.

Convenience stores in Beijing were doing a brisker than usual business in air filtering face masks Monday night as residents began stocking up for the days ahead.

“You have to do whatever you can to protect yourself,” said Li Huiwen, who stopped by a market on her way home from work. “Even when wearing the mask, I feel uncomfortable and don’t have any energy.”

Most of the city’s international schools cancelled Tuesday classes, although it wasn’t clear how many Chinese schools planned to do so.

There previously have been stretches of severe smog in Beijing that lasted more than three days. However, those had initially been forecast to last three days or less, so they did not trigger a red alert. The alert requires a forecast of more than 72 straight hours with PM2.5 levels of 200 micrograms per cubic meter or more.

Polluted air throughout broad swaths of China has had severe health effects. A study led by atmospheric chemist Jos Lelieveld of Germany’s Max Planck Institute and published this year in Nature magazine estimated that 1.4 million people each year die prematurely because of pollution in China.

Most of the pollution is blamed on coal-fired power plants, along with vehicle emissions and construction and factory work. China, the world’s biggest carbon emitter, plans to upgrade coal power plants over the next five years to tackle the problem, and says its emissions will peak by around 2030 before starting to decline.

While emissions standards have been tightened and heavy investments made in solar, wind and other renewable energy, China still depends on coal for more than 60 per cent of its power.