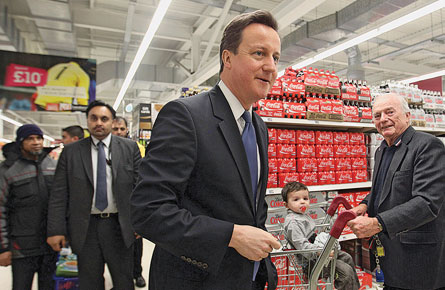 It’s been a difficult few weeks for David Cameron’s much vaunted Big Society.

The concept behind the British prime minister’s plan to rejuvenate the economy is either the great hope for modern Britain or a puff of political hot air, depending which side of the debate you fall on. As the initial round of deep public spending cuts approaches later this spring—the first of a planned $130 billion through 2015—some former champions are backing away from the notion of what Cameron calls the “plan to dismantle Big Government and build the Big Society in its place.”

So what exactly is the “big society” anyway? In the Conservative-Liberal Democrat coalition agreement, it is described as a plan to “take power away from politicians to give it to people.” Labour MP Ed Balls, on the other hand, has dubbed it “the big con.” Three points are certain: it seems to involve less government, more civic engagement, and the PM is very, very excited about it.

Others less so. Lord Wei, a consultant tasked by Cameron with pushing the Big Society agenda, revealed last month he would be scaling down the amount of time he devotes to the project (the irony of having a key volunteer abandon the volunteering bandwagon has been giddily noted in the country’s left-wing press). And in the same week, Liverpool city council, which was a test case council for one of four pilot volunteer schemes, announced it was pulling out and no longer supports the Big Society, as a direct result of the Tory-led government’s funding decisions.

But Cameron remains undeterred in his vision to fix what he believes is a society broken by dependence on government overspending and lack of public participation. In a recent op-ed for the Telegraph, the PM laid out in broad strokes his plan for the devolution of power from Whitehall—one that will involve not only passing more power and responsibility down to local councils, governments, and private volunteers and institutions, but also having private companies bidding on contracts to deliver public services in virtually every sector except the judiciary and national security. And if Cameron was hoping to convince the nation that the Big Society is about much more than encouraging people to pick up rubbish, he has succeeded.

It is a sweeping vision of radical reform—one that Guardian columnist Polly Toynbee says will completely destroy the U.K.’s public sector if implemented. “Conservatives always crave for this idea of the tiny state, and they romanticize it with the notion that charities and private donors will step in,” she said in an interview. “But it doesn’t make sense in this economy. On the one hand you’ve got donations to charities falling off a cliff because the private sector lost so much in the crash, on the other hand there’s a huge depletion in the funds for voluntary organizations. So there is a contrariness of Cameron sounding great on the surface, yet cutting everything that would make it happen.”

Even champions of the Big Society admit the plan is mind-boggling in scale. Tory MP Jesse Norman (whose book The Big Society lays out the model for Cameronomics) claims the idea is so revolutionary it would take nearly a generation to be implemented properly. But there are those pioneers who welcome the opportunity for more individual choice where public services are concerned. Toby Young, a freelance journalist and father of four, is one of the founders of the West London Free School—the first of a new generation of state-funded schools. Just last week, Young’s school received the government go-ahead to open in September. The new “free schools” will be organized and overseen by parent volunteers but funded by the central government, and are being promoted as a “third way” solution to the U.K.’s moribund state education system.

In recent months, Young, who has spent years campaigning tirelessly for free schools, has found himself cast as a poster boy for Cameron’s Big Society—not that he minds. “I like the idea of a shrinking state, and of little platoons stepping up to occupy the space previously occupied by it,” he says, referencing the political philosopher Edmund Burke’s famous adage that “to love the little platoon we belong to in society, is the first principle of public affections.”

In the noisy debate over the Big Society, the issue of free schools is a particularly divisive one. Opponents like Toynbee argue they will lead to a dizzying hierarchy in which the state system will become entirely ghettoized. But Young insists his free school, which started out as a pet project to find a better education for his own kids, is the first step in creating a brighter future. It’s also the first concrete example of the Big Society in action.

“Any attempt to introduce a high falutin’ idea into British politics is automatically scorned and laughed at,” Young says. “But my experience is that it’s not so far-fetched.” He adds that it’s also involved countless hours of unpaid labour. “My wife likes to joke that if I’d spent as much time on my career as I have on the free school we could afford to send all our kids to Eton.”